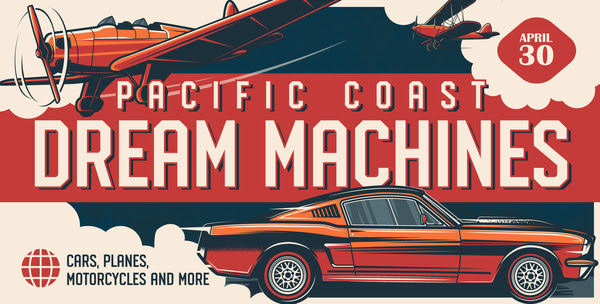 "A DREAM GOES ON FOREVER"

Plans Include a Special, Next-Generation Showcase "Machines of Tomorrow"

Plus Bob Senz’ Big Cacklefest, a Mass Firing-Up of the Engines

Headline The Coolest Show on Earth

A Benefit for the Coastside Adult Day Health Center
NEW, IMPROVED EVENT LAYOUT TO BRING ALL THE ATTRACTIONS CLOSER TOGETHER

After three unimaginable, frustrating, chafing at the bit years on the sidelines, organizers are bringing back Half Moon Bay California’s remarkable, one and only Pacific Coast Dream Machines Show in 2023, marking its 30th aniversary with a massive celebration of mechanical ingenuity, power and style in a Big Revival Show.

"The Coastside community and devoted fans throughout California have told us how much they missed Dream Machines and our show committee is super excited and energized to bring it back to a vibrant new life in 2023 and make it an even better experience for our fans than ever," said Janie James, Executive Director of event beneficiary, the Coastside Adult Day Health Center."

This year’s spectacular show will be held on Sunday, April 30, a one-day mega-show, from 10 a.m. to 4 p.m. at Half Moon Bay Airport's Eddie Andreini Field, located in the picturesque seaside town of Half Moon Bay, CA about 20 miles south of San Francisco.

It's quite simply “The Coolest Show on Earth” – a whimsical, fascinating, amusing, curious and absolutely unique show and tell spectacle featuring some 2,000 magnificent driving, flying and working machines from the 20th and 21st centuries.

The world's coolest cars of every era and style, model-T fire engines, vintage busses, custom motorcycles, tricked out trucks, sleek streamliners, one-of-a-kind antique engines and tractors and historic military aircraft will be among the mesmerizing displays.

Plans for this year's show include a new "Machines of Tomorrow" showcase with fascinating displays of all things to come in the next-generation of transportation – concept cars, flying cars, robotics, autonomous vehicles, EVs and more.

This year’s show will feature a new, improved event layout bringing all the attractions closer together and making it a more walkable, unified show with separate entrances for spectator parking (access from Capistrano Road at the south end of the airport) vs. display vehicles, vendors, sponsors and volunteers (access from the airport main entrance on Highway 1).

To show a car, truck, motorcycle, aircraft or other machine, the pre-registration fee is $40 ($50 for entries postmarked after April 15) and includes a custom dash plaque and admission for the registrant plus one passenger (must be together in the registered vehicle). Register online on Eventbrite

The show benefits the Coastside Adult Day Health Center. Thanks in part to fund-raising support from Dream Machines, the beautiful and newly modernized Coastside Adult Community Center opened in 2014. Drop by their facility at 925 Main Street in Half Moon Bay.