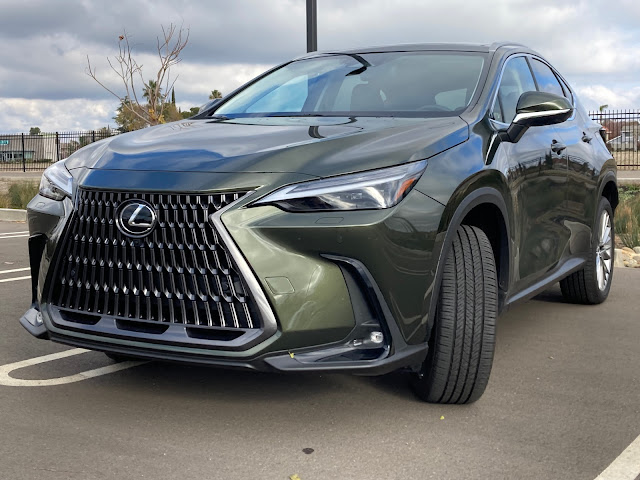 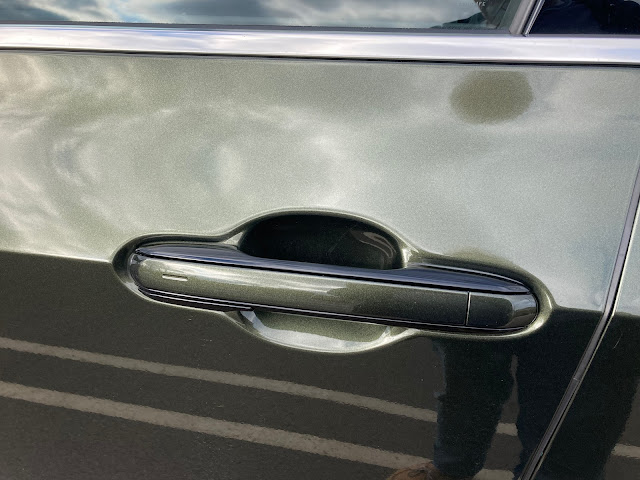 Let me explain. You walk up to the door, touch the handle and you'll hear a click and the door pops open a tad. Grab the handle and pull and the door easily opens. But the handle itself doesn't move. I guess it's neat but seemed a bit much to me.
Then take the interior handles - please. 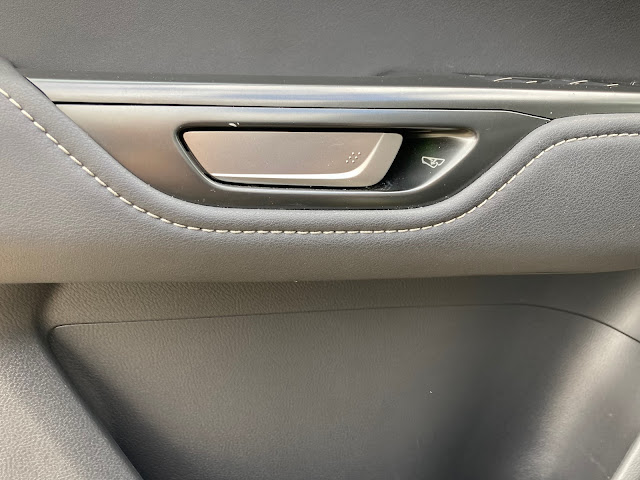 Above is the inside door handle. It's small but it felt rugged enough. Now I had the NX 350h for a week and it wasn't until the last day that I figured out what I think is the proper way to use the handle. I had been pulling on it, and that was annoying because you had to pull it twice - once unlocked it and the second time opened the door. Then on the last day I happened to push in the handle where those little six dots are and PRESTO! the door opened.
I have no idea why Lexus decided to reinvent door handles, there really isn't a good reason that I can think of, and I have to wonder how well the doors will open after a freezing rain. What about with a dead battery? For me file this under if you can't make it better why make it different?
In the Lexus world the NX is the second (size-wise) in a lineup of five, starting with the UX Hybrid and ending with the LX. There are three hybrids and one plug-in hybrid EV. The NX 350h is one of the hybrids.
Power in the NX 350h is from a 2.5-liter, 4-cylinder that makes 189 horsepower, ad in an electric motor for a combined output of 239 hp. The power goes out through a Electronically Controlled Continuously Variable Transmission (CVT) to all four wheels (AWD).
The big benefit to the hybrid drivetrain, any hybrid drivetrain, is its fuel economy. The NX 350h is no different. I didn't get a chance to take it for a trip but a hybrid's forte is usually around town. The NX 350h is rated at 41-mpg in the city, I fell short of that getting only 32.8-mpg. Still not bad.
When under electric power the NX 350h power system is dead quiet. Step on the accelerator and the gasoline engine kicks in and you hear it - it sounds coarse. It felt fine but instead of a nice hum there was more of a grrrrr. 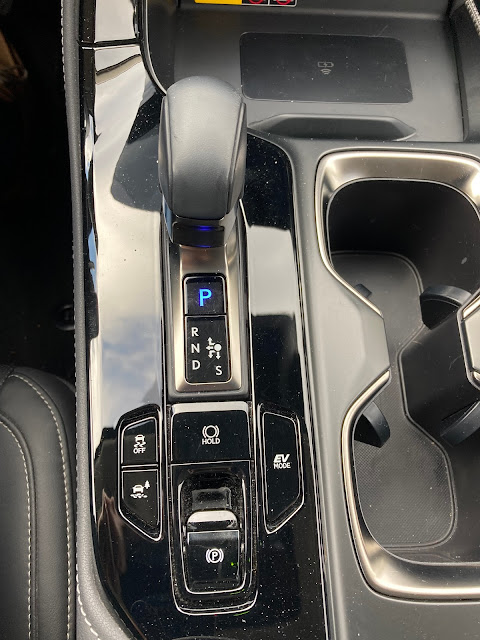 Like so many auto makers Lexus redesigned the gearshift mechanism. When I first got in it I said to myself "Wow! A real gearshift lever." Then I used it. I figured it was in Park because the big 'P' was illuminated. So if it's in Park to get to reverse you would move the lever down (back) right? Nope. That engaged Drive. But it's right there P, R, N, D. I fiddled with it for a minute or so and then it dawned on me - Park is a button not a position of the lever. So to engage Reverse you have to push the lever forward. So after decades of PRNDL you have relearn how to shift an automatic (actually the transmission is a CVT)?
The rest of the controls were fairly normal. I would like a larger volume control knob for the sound system (that tiny knob lower center of the big screen) but that is a minor gripe.
Can I say something about wireless phone chargers? They are not all equal. The one in the NX 350h worked fine but some won't work with a cell phone with a cover. There are somethings that should have standard capabilities and the wireless charger is one in my opinion. 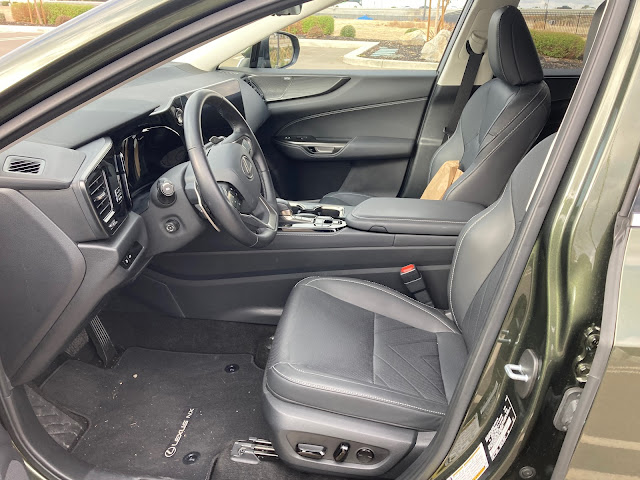 Front seats have come a long way. It's difficult to find a seat that isn't comfortable and supportive. The NX 350h seats were excellent. They both are heated and cooled, with an 'Auto' setting that keeps the temperature just right. Nice touch. 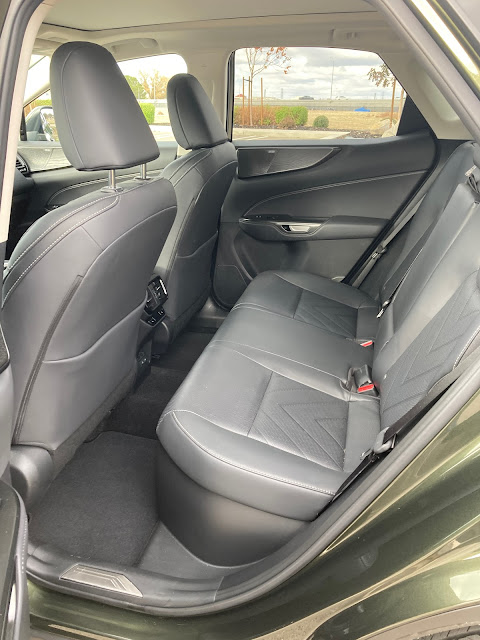 The rear seat is capable of holding three people. I remember when no one wanted the center position because the driveshaft hump limited your foot room. In todays vehicles the center arm rest is the problem. The center position just isn't as comfy as the two outer positions, and this isn't just a Lexus problem. 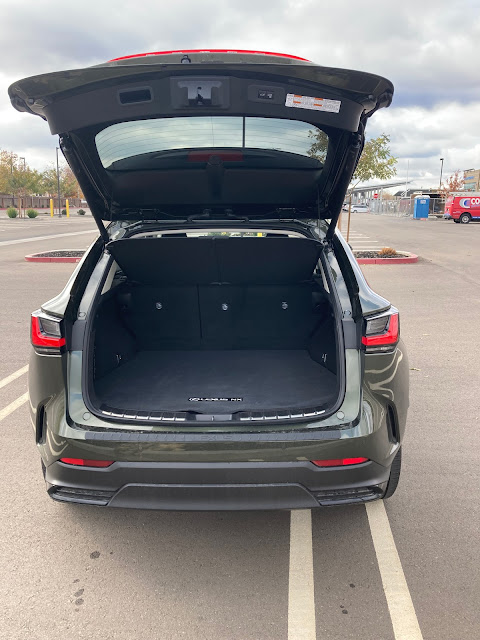 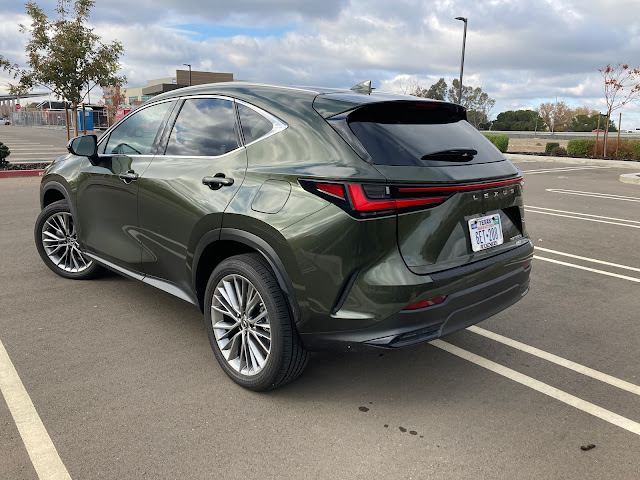