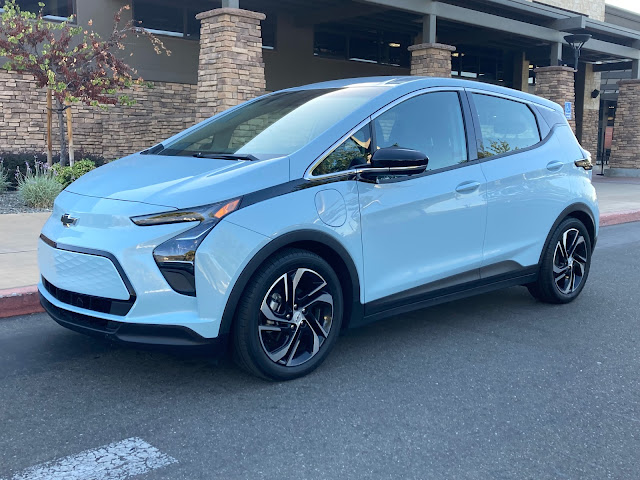 I am getting some much needed experience with EVs, four in two months including two Chevy Bolts.
Like "normal" cars, EVs come in different sizes. The Bolt has two different sizes, both what I would consider compact EVs, a perfect size for me and mine. I started with the smaller of the two, the Bolt EV 2LT.
The Bolt EV is 163.2" long on a wheelbase of 102.4". It will comfortably carry four adults, five in a pinch. It's got enough room for what you'll need for a weekend getaway behind the rear seat; 16.6 cubic feet behind the rear seat, and 57 cu. ft. with the rear seatbacks folded down.
One criticism I have of many EVs is that I find the styling a bit too much, too avant-garde. The Bolt on the other hand is fairly "normal' looking (I am not a person who normally wants to stick out). Except for not having a front grille this could be a gas powered car. I surprised myself because I like the Ice Blue Metallic paint color (I tend to like rich, darker blues). All in all I think the Bolt is a handsome vehicle.
Inside the Bolt 2LT is nicely appointed but not lush. I generally had no problem finding the controls for what I needed. I still found myself grabbing for a shift lever now and then but the switches on the center console were fairly straightforward (P for Park, R for Reverse, N for Neutral, and D for Drive). 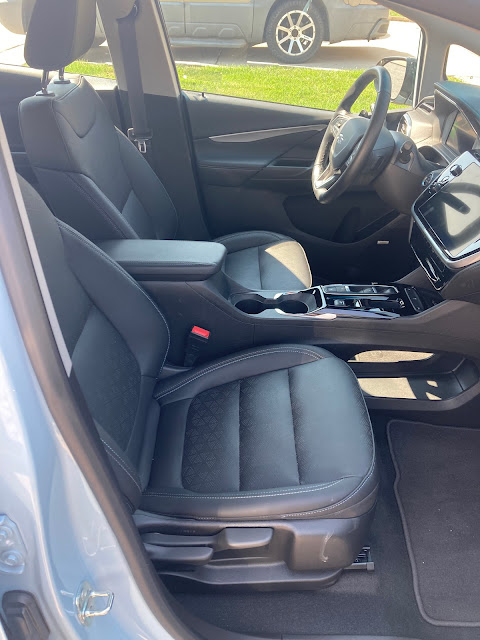 The front seats were generally comfortable although I've grown accustomed to seats that gently blow cool air on my back. They are heated. I've heard complaints from some people that the wireless phone chargers don't work if their phone has a case. The Bolt was the first vehicle where I experienced this minor, intermittent problem.
As I said earlier the rear seats will comfortably seat two adults; legroom was good. Like so many cars the middle seating position is less than optimal but it will do in a pinch. 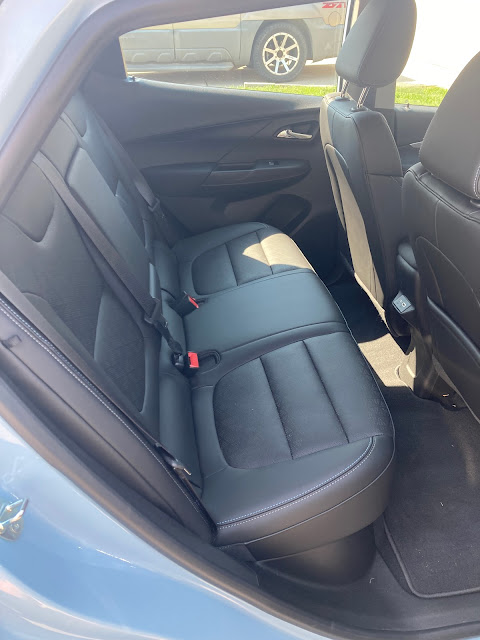 I like hatchbacks, I liken them to a station wagon especially when the hatch door is almost vertical. I don't like it when car companies cut corners though. The cargo cover was just about the cheapest one I've seen, and one twist in pivot refused to stay put. You can do better Chevrolet.

Now let's get to the driving. Everybody wants to know what's the 0-60 time is for an EV as if that is its reason for being. Just to satisfy your curiosity the 2022 Bolt EV can hit 60 mph in around 6.5 seconds. But what is really important is how far it can go on a full charge. USEPA says the Bolt can go 259 miles on a full charge. This is more than enough for most uses. The other big question, and one I've seen false info on, is how much does it cost to charge? Obviously this depends on where and how you charge it. I tried to charge it on 120v and it was painfully slow. So I took it to a commercial charging station. I left it on the Level 2 charger for about 50 minutes. The range when I plugged in the Bolt was just over 110 miles and after charging it was slightly more than doubled. EPA says the MPGe (Miles Per Gallon equivalent) is 120. I did my own rough equivalency; it cost me about $20 for the charge, I divided this by the price of a gallon of gas in my area (just under $5.00) which works out to 4 gallons, and divided the added range (rounded to 100 miles) and came up with an equivalency 27.5 mpg. I hear you saying "That's not great." That is mostly around town with a whole lot of sitting running the A/C (it was in the triple digits and I often wait in the car while my wife does some shopping). 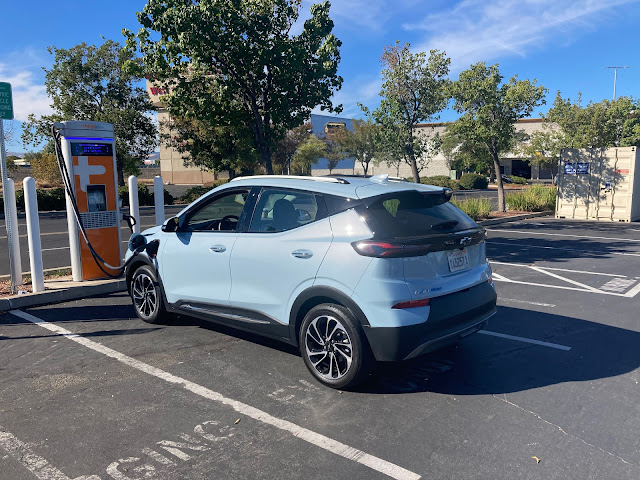 A week or so after driving the Bolt 2LT I got a Bolt EUV (Electric Utility Vehicle) Premier for a week. The Premier is a step up from the 2LT (it had cooled and heated front seats!) but identical in its mechanicals and operation. You won't really notice the just over six extra inches in length unless you sit in the rear seat where you get three inches of extra legroom. 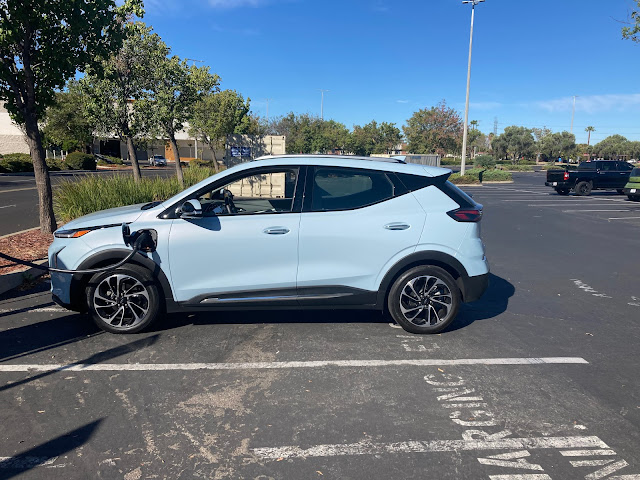 One thing I had trouble getting accustomed to was the 'one-pedal' operation. Basically you don't need the brake pedal. Chevrolet explains it this way "One-Pedal Driving lets you slow down and stop your vehicle using only the accelerator pedal under most conditions." It kind of felt like the parking brake was on all the time but it does help in regenerative charging. I just couldn't get used to it.
One problem with EVs, at least in my view, is price. The base price of the 2022 Bolt EV 2LT is $35,695 according to Chevrolet's consumer website (https://www.chevrolet.com/). A 2022 Bolt EUV Premier starts at $38,995. For us, and I'm guessing many others, the government incentives - tax credits - mean little. It's nice to get a bigger refund but that doesn't lower the monthly payments. Chevrolet may have an answer though. Their site shows that a 2023 Bolt EV 2LT is $29,795, and a 2023 EUV Premier is $32,695. 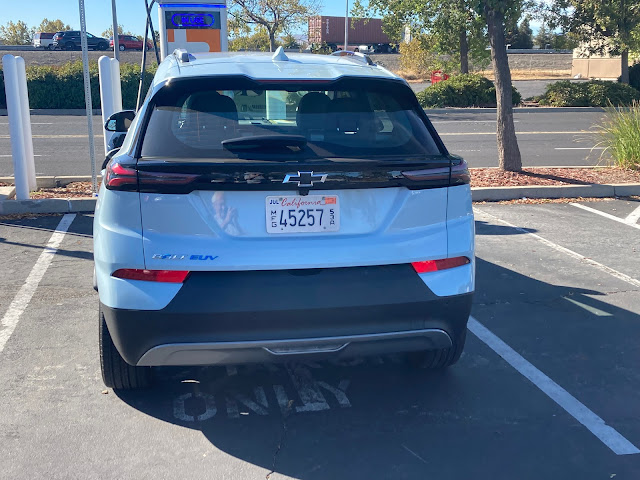 If you acknowledge the limitations of charging and plan your routes you should consider an EV. I liked both Bolts because their size suits our needs.
Now I'm going to editorialize about EVs in general.
The EVs I've driven have been excellent vehicles. Some have had what I would consider good to very good range. The problem is with recharging. It simply takes too long. Even Tesla's Supercharger takes about 15 minutes to add 200 miles to the range. I took the Bolt EUV to a "fast" charging station when the battery was down to around 30% and it took well over an hour to bring it to 100%.
One problem I found with commercial charging stations was that every single one I checked out had one or more units inoperable. And I found the screens on many almost impossible to read either because of bright sunlight or sun damage to the screen.
Home charging stations (Chevrolet will pay to install a home charging stations for specific Bolt models) are the way to go in my opinion but even they have their limitations. If you subtract 10% from the range and divide that in two you should figure that is about as far from your home base you should travel before heading home unless you can find a charging station. So if your EV has an advertised range of 250 miles, deduct 25 miles, divide 225 by 2 and you end up with a distance of about 112 miles from home.
This wouldn't be a huge problem for us because we are retired and the majority of our driving is around town. If we wanted to go on a long road trip we would most likely rent a car.
I see the charging station problem as a two-part problem. First there just aren't enough (working) charging stations, and second they take too long to charge. Who wants to waste an hour or more on a road trip waiting for their car to charge up?
Then there is our national electric grid. Let's face it, our grid sucks. In California we are warned not to use electricity at various times throughout the year. We have all seen the electric grid fail in other states as well. Electricity availability is not a sure thing.
I have faith that EV batteries and charging stations will improve. Will the infrastructure fail or save EVs, that is the question.
Email Post