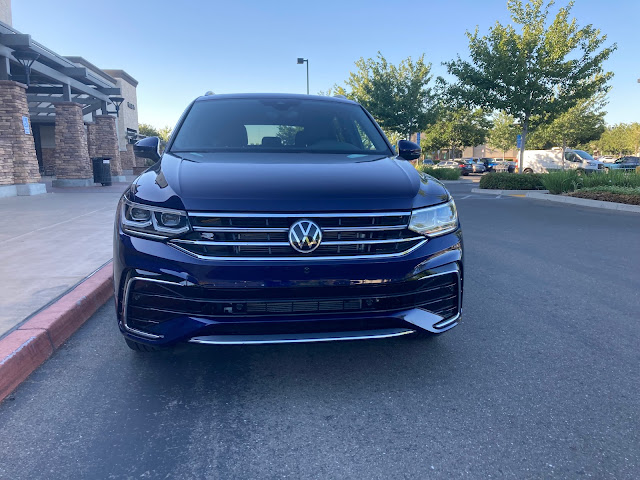 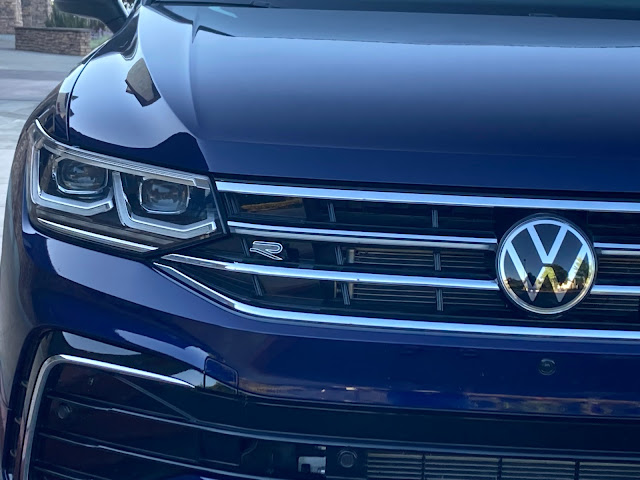 I like VWs. I find them comfortable, and fun to drive. I like the style of VW's SUVs; yes they are conservative but in this case conservative means it won't go out of style in a year or two. And in its Atlantic Blue Metallic paint I thought the Tiguan looked elegant. So even though the Tiguan was a replacement for another vehicle I was looking forward to driving I was pleased to see it in my driveway.

Looking at the 3,856 lb., 15.5' long Tiguan you have to wonder just how capable is it with only 184 hp and 221 lb-ft of torque? That's a fair question. Let's just say that it is adequate for the vast majority of drivers but it isn't going to win any drag races. It also limits its towing ability to 1,500 lbs., good enough for what we used to call a 'camp trailer'.

As with just about all personal vehicles now the only transmission is an automatic, in the Tiguan it is an 8-speed, coupled with the test R-Line VW's 4Motion (AWD). The biggest plus is that VW lets the driver select the default setting; I chose 'Sport' for the transmission and it never defaulted to anything else. Bonus. 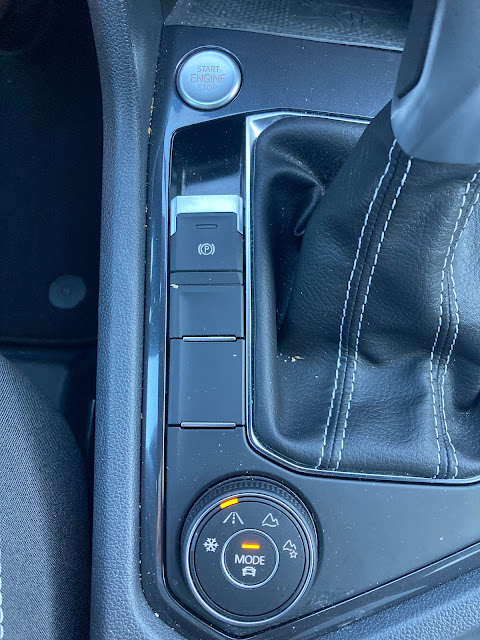 I've always liked VW seats. The seats in the Tiguan were firm and comfortable. The fronts had modern conveniences like heating and cooling. The rear seat was comfortable and had plenty of room for two of me or three folks not as large as I am. There is a third row on 2WD Tiguans. 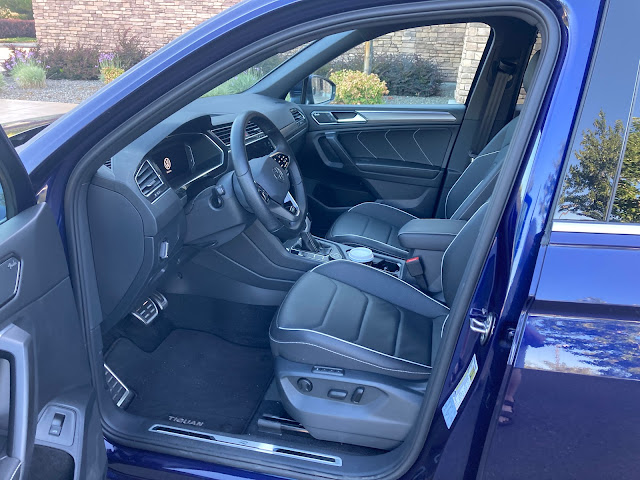 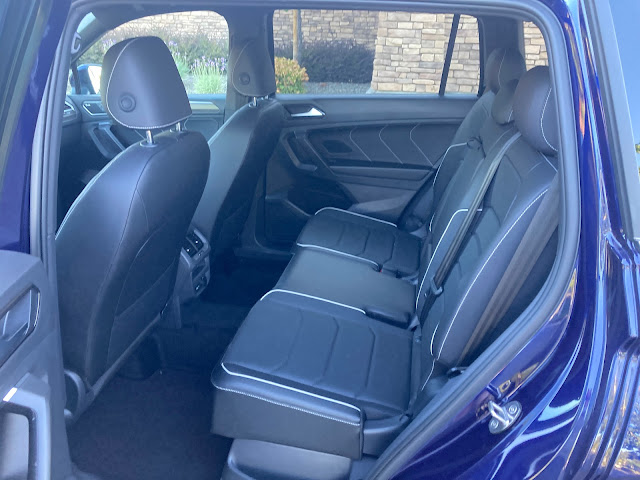 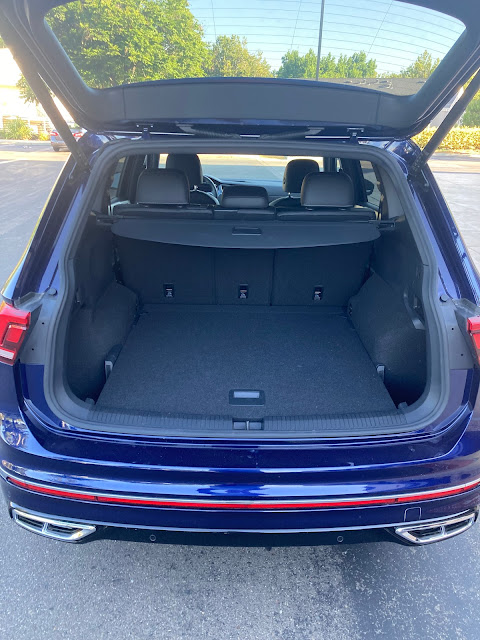 So how does it drive and ride? Just fine. The ride is firm but I liked it. On the road you don't really notice the power deficit (as compared to other makes), the Tiguan is just fine in the cut and thrust of every day traffic.

I didn't get a chance to check the real world (or my world) fuel economy. EPA rates the R-line at 21-mpg city and 28-mpg highway. Recent tests by others show that the EPA rates are easily obtained.

Even though I like the Tiguan's looks and size there were problems that I couldn't ignore. The first time I drove it with my wife in the car it kind of sagged on initial acceleration. The best way for me to describe it is that it was a bit like a carbureted car taking off cold with the choke not working. It only lasted at the first application of the gas pedal, but it did happen twice. My wife said "What's wrong with this?"

Then there was a problem when I went for a coffee, listening to some tunes on SiriusXM as I drove. When I came out with my coffee and started the Tiguan the screen said the radio was on but there was no sound. I tried AM, FM, and connecting my iPhone but no sound. I was baffled.

I drove home and when I got there and shut off the engine a message appeared on the screen telling me there was a software update. It instructed me to not drive the car during the download so I went into my house to wait and see what happened. When I drove the Tiguan an hour or so later everything was fine - there was music! I still don't know what that was about.

I'm kind of anal about some controls and displays. On a test vehicle I like all the nanny stuff turned on so I can see if they are intrusive or just there in case. Most of the switches were easy to find and use but I could not figure out how to adjust the clock. I searched the owner's manual but couldn't find it. My personal electronic devices automatically know what the time is, heck my smart phone resets the time if I change time zones. With all the connectivity in today's cars why do we have to manually reset the time?

I see a lot of VW SUVs on the road so maybe I'm being too critical. But with so many choices my expectations are high. 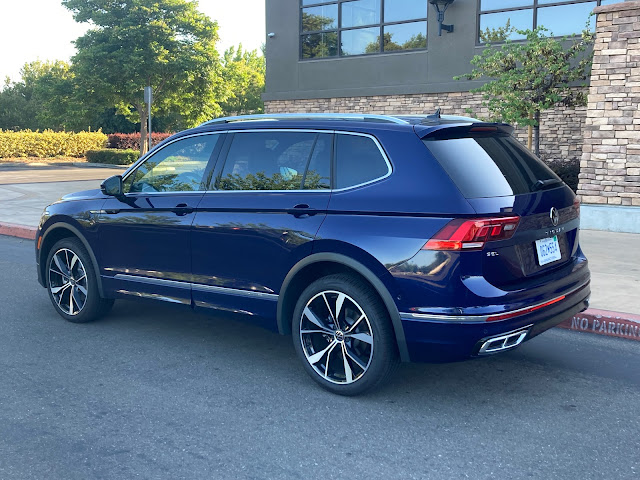 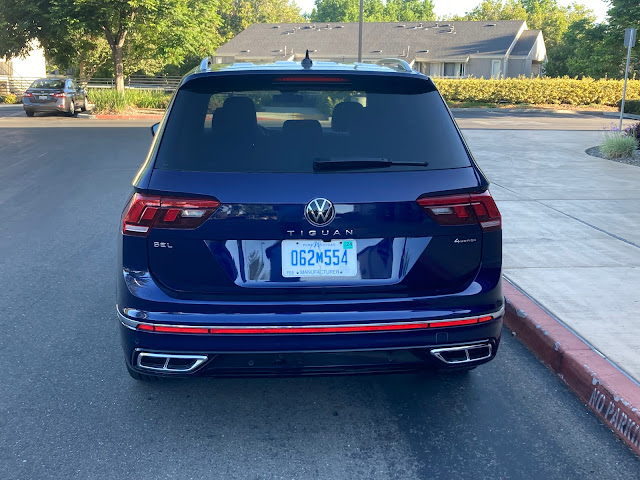