First impression - Wow this thing is loaded! Then I thought "there's too much stuff." Which got me thinking about what I would do without and why. Which led me to the realization that anything I'd delete would not make much difference in the Mini's weight, handling, or driving enjoyment. My wife's first impression was more succinct - "That's so cute!" Yes it is cute. 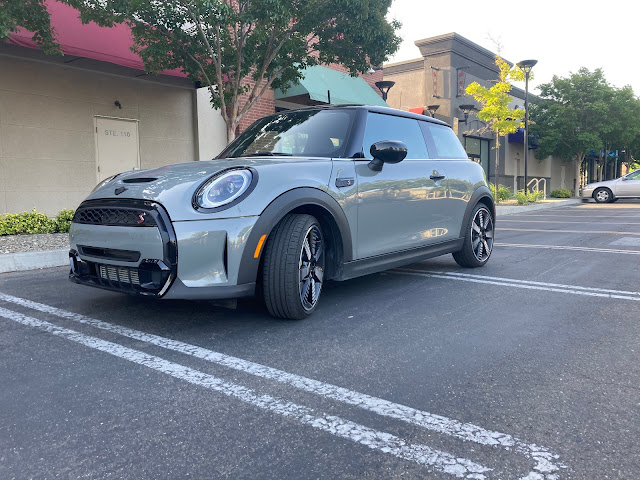 The 'new' Mini was introduced in 2001 and although it has been upgraded since then it still looks essentially the same. It's grown a bit but not by much. By modern standards the 3-door is still small. But boy do they cram a bunch of stuff into that little package! A big plus of modern technology is that it doesn't really take up much space or weigh too much.

The Mini got some styling changes for 2022, nothing revolutionary, it's still a Mini. The front and rear bumpers have been updated, the front grille is revised, the wheels are new, but nothing earth-shattering.

There are a variety of Mini models - 2-door, 4-door, wagon (Countryman and Clubman), convertible, all out performance in the John Cooper Works, and electric.

The Cooper S I drove had the dual-clutch 7-speed automatic; a 6-speed manual is available. Although part of me would rather have had a manual transmission I have to admit that the auto was just fine. Put it into manual mode and the shifts are quick and positive, and the paddle shifters mean you don't have to take your hands off the wheel. I did find the shift lever a little confusing at first - there are two buttons, one to engage Park and one to allow you to shift into Reverse - but I quickly mastered it. Yes the auto adds a bit of weight, 29 lbs. according to the specs, but unless you race the car you won't notice. According to Mini the Cooper S is capable of 0-60 mph in 6.4 seconds. 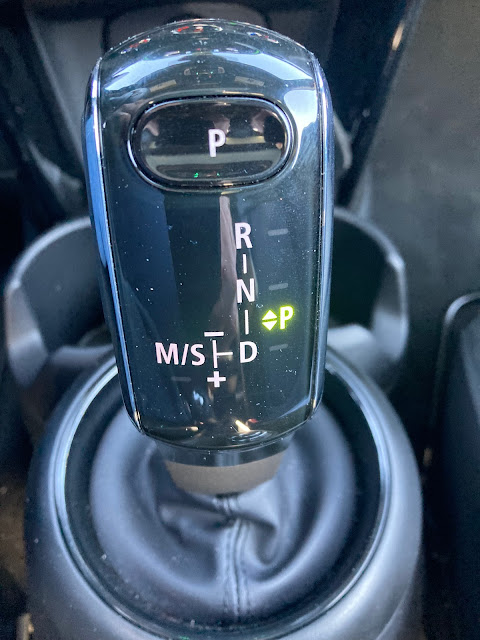 I took the Mini Cooper S from my home in Tracy, CA out Corral Hollow Road to Tesla Road (same road), up over the Diablo Range. It is a very twisty bit of two-lane. Now I didn't try to tame the road, no point in putting neither the Mini nor my license at risk, but I did have some fun banging the trans through the gears. I feel fairly confident that in the hands of someone better qualified than I am could have really put the Mini through its paces.

I also drove the Mini on a multi-lane, truck clogged Interstate. That's where you realize how small a Mini is. Sometimes I wish there were separate highways for trucks (not a knock on the knights of the highways). Unfortunately due to heavy traffic I only averaged 33.7-mpg and 40.8 mph. The Mini Cooper S is rated at 38-mpg highway.

Mini says the Cooper seats four people. I would not want to be one of the two in the back seat. But it's not any tighter back there than many small 2-door sedans. The front seats were really supportive and comfy, a nice combo. If I owned a Mini I'd fold the rear seats down and treat it like a 2-door, Mini station wagon.
Mini touts its new, upgraded tech. I could live without it. If I owned a Mini I'd learn how to use it all but I had to get out the owner's manual three times to figure out how to put something on the center screen. Add in the two rows of toggle switches that I could not see what they controlled (other than the Starter switch) unless I put my glasses on, something I can't do while driving because they are reading glasses, and I had some problems. All of this would disappear with usage but I only have a car for a week.

I found the suspension too harsh for my tastes. I'm sure that on a skid pad or race track it is fine but out here in the real, pot-holed world a little more compliance would be appreciated. Around the corner from my house the city dug a hole in the street and covered it with one of those huge steel plates. Even with their efforts to blend it into the street unless I slowed to about 5 mph there was a huge BANG! as the front tires hit the bump. Part of the problem is probably the optional 205/40R18 Pirelli PZero tires (or tyres if you are an Anglophile). I'd opt for tires with more sidewall and give up some ultimate handling.

I enjoyed my week with the Mini Cooper S. It's a fun little car. It is a testament to the design that even after all these years it is still popular. It is difficult to design a car that appeals to a wide range of buyers, the Mini pulls it off. The biggest downside, at least for me, is the urge to run it through the gears, which might lead to points on my license.