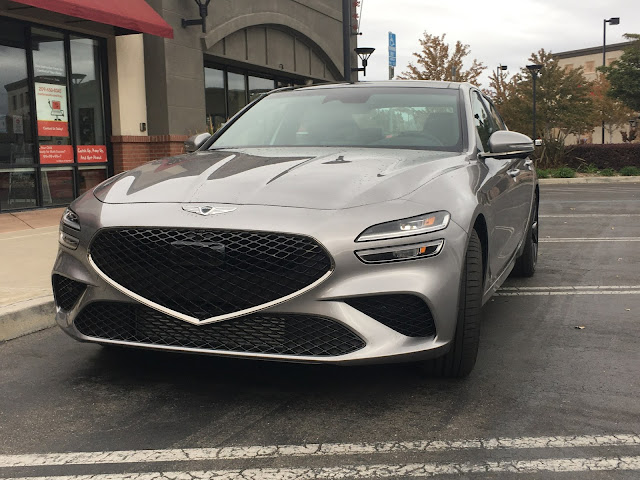 The Genesis G70 has been around for a few years now. I've been a fan since its introduction, and I've had a few short drives throughout the years, but I finally got to spend a full week in one (thank you Genesis). Was it worth the wait? I'll let you know in my closing. 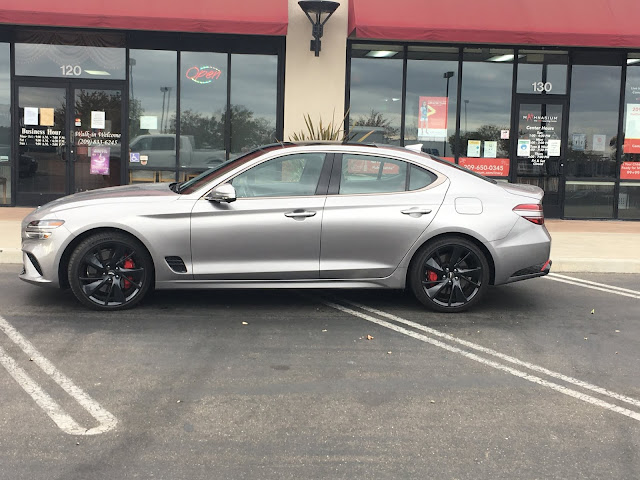 The G70 is available with two engines, a turbocharged 2.0-liter, 4-cylinder and a twin-turbocharged 3.3-liter V6. The four is okay, putting out 252 horsepower and returning better fuel economy. But the V6 is so sweet. So of course the test G70 had the V6.

It is a thoroughly modern engine that puts out 365 horses and 376 lb-ft of torque. Like most modern turbo engines the power delivery is smooth - you never feel the turbos kicking in, they just spool up quickly. The end result is a 0-60 time of 4.5 seconds according to Genesis. Not too shabby for a 2-ton, 4-door sedan.

All that power goes through an excellent 8-speed automatic transmission. AWD is available; the test G70 was RWD and with the traction control I don't see the need for AWD unless you live somewhere that it snows incessantly. 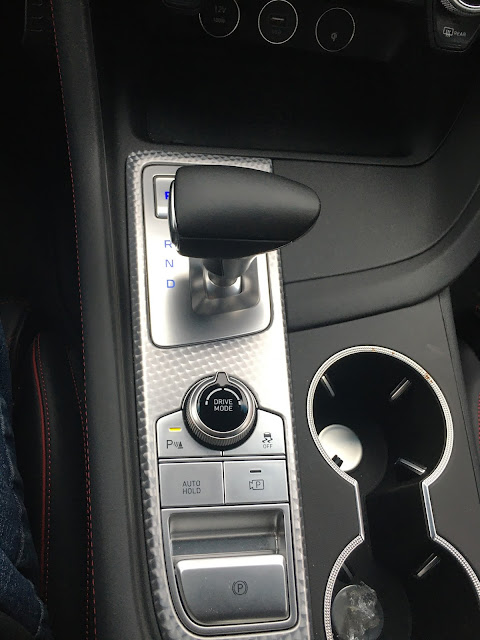 Yes there is a gearshift lever but it isn't the old PRNDL pattern. To engage Park there is a button (just visible in the photo ahead of the lever), to Reverse you have to push a button on the left side of the hand grip and push the lever forward, and to engage Drive just pull back. Like many cars the parking brake is electric.

There is a switch that lets you select five different drive modes - Eco, Comfort, Sport, Sport +, and Custom. The options changed the engine, transmission, and exhaust settings. In Sport and Sport + (Sport + turns off the traction control and changes the transmission setting) the exhaust gets a nice snarl. 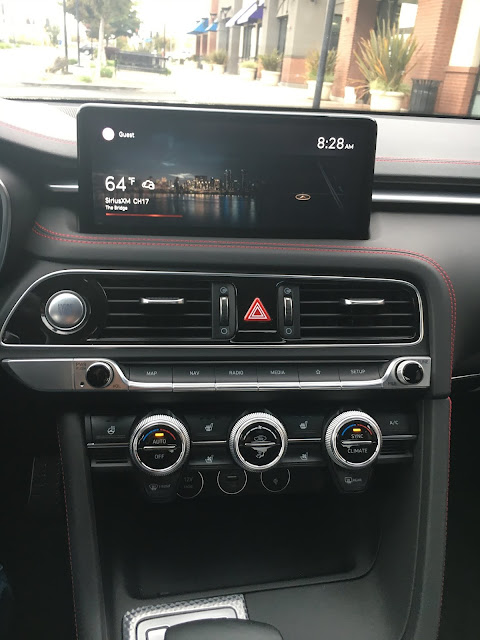 I found the layout of the instrument cluster and controls logical and easy to read and use. The sound system knobs were small but set apart from the large climate system. The only complaint I had was that the screen shown is the default; I switched to the Radio screen most of the time. 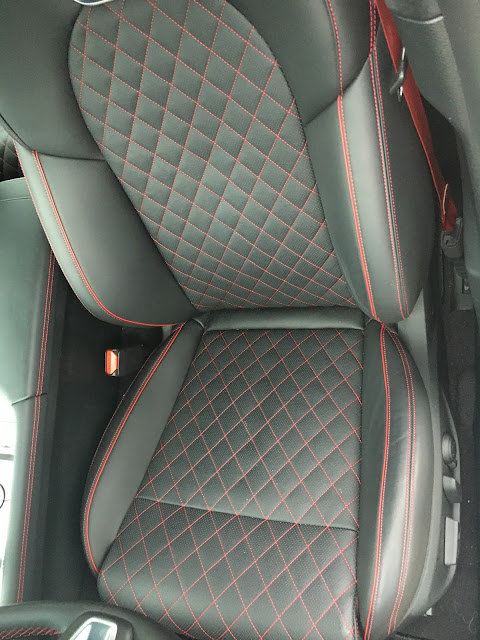 The interior is nice but not flashy (well except for the red seatbelts). I don't like nor need flash. I want an interior that looks good, is comfortable, won't show dirt easily, and if it does get dirty it should be relatively easy to clean.

I didn't have the opportunity to fill the G70 with people but I did take it on a mini trip - about 60 miles from my house to San Jose, CA to see 'Beyond Van Gogh' (well worth the trip). With the Smart Cruise Control set at 70 mph (although most of the time traffic was moving a bit slower) the G70 got 29.3 mpg, 2.3 mpg over the EPA rating.

Anyone who hankers for the 'good old days' is deluding themselves. As Carly Simon sang, "these are the good old days." There are so many cars that are as fast as or faster than the fastest performance cars of yore. And today's cars corner and brake so much better than the '60s and '70s factory hot rods. Plus they have all the creature comforts, AND they get great fuel economy and run clean (relatively). Oh yeah they also have real warranties. 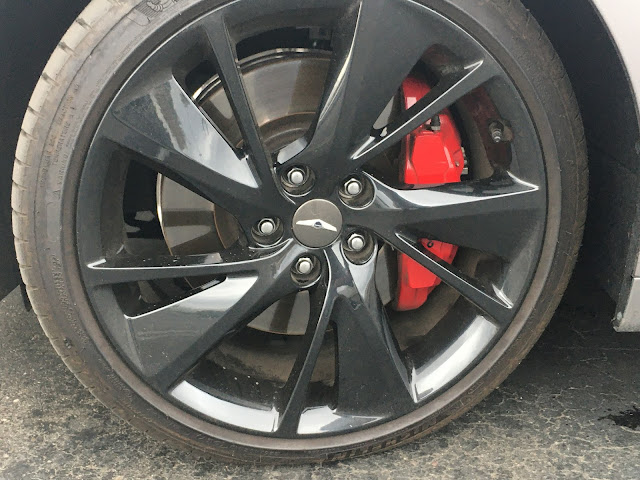 I've given up trying to make sense of vehicle prices. I don't know if I'm cheap, frugal, stuck in the past or delusional. Probably a combination of all that. Millions of people buy a new car every year. The average new car transaction price in 2021 was $42,258. So it's all about perspective when discussing price.

There are only two things I'd change on the G70. I'm not a fan of silver paint so that has to go and it's easy to change on the order form. The other thing is a plus that's also a minus. The front doors open really wide which makes getting in and out easy. In fact they open so wide I could barely reach them to close. Small thing especially because in most parking spaces you'll never open the door all the way.

So was it worth the wait to get a full test of the G70. Yes and no. Yes because I enjoyed my week with the G70. No because I didn't want to give it back. 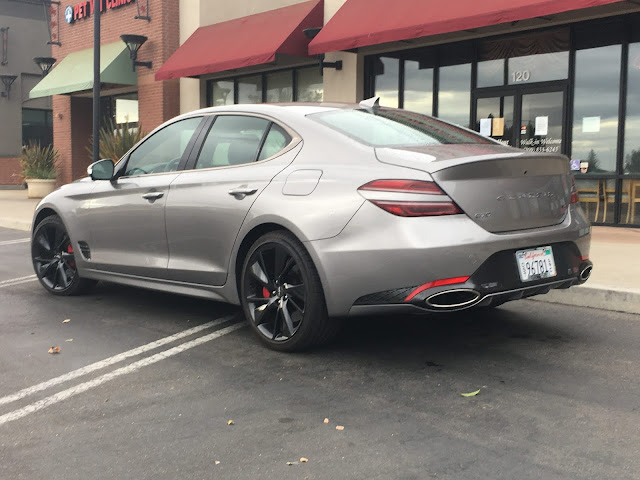