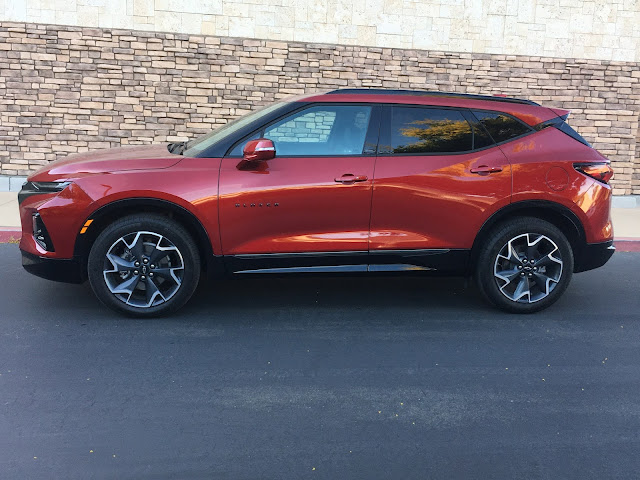 Like just about all SUVs the 2021 Blazer is a far cry from its original. Back in 1969 the first full-size Blazer, based on the Chevrolet C/K pickup, entered the market. It was a rough and tumble, off-road SUV just like its competitors. And like its competitors it became more and more civilized over the years.

Much has changed over the years. Not that many people really want a vehicle that is rough and tumble. That isn't to say people don't want a vehicle that is capable of conquering the Rubicon, but that they also want their creature comforts. Which brings us to the current subject, the 2021 Chevrolet RS AWD (note that it is All-Wheel-Drive instead of 4-Wheel-Drive). This really isn't your grandad's Blazer.

I have no idea what the Blazer's off-road capabilities are; I like the vast majority of people rarely if ever go off-road. I admit that I have never owned a 4WD or AWD vehicle. If I ever had need of either it would have been when I lived in places where it snowed, not in California's Central Valley.

This Blazer, the new Blazer, is really a suburban vehicle. With very few exceptions it will never go off-roading, at least as a new vehicle. It will ferry kids to school and sports games, it will get the groceries, it may go to work, it may tow the boat, but it will not ford streams or climb mountains.

Given all of the off-road capabilities I tested the Blazer in real world conditions - in town and on the highway. And I can unequivocally say that it was just fine and I liked it. 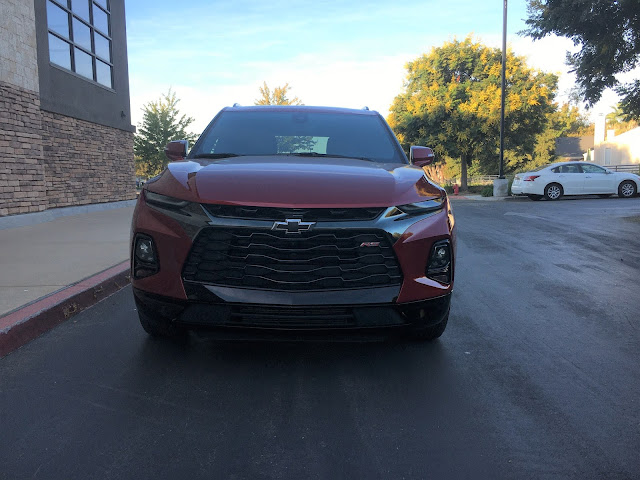 Stylistically I'm torn. Don't get me wrong, the Blazer, especially with its Cherry Red Tintcoat, is a very good looking vehicle. It just struck me that many designers must have all gone to the same school; so many look similar. At one point in time people could identify the make and model of just about any vehicle at a glance. 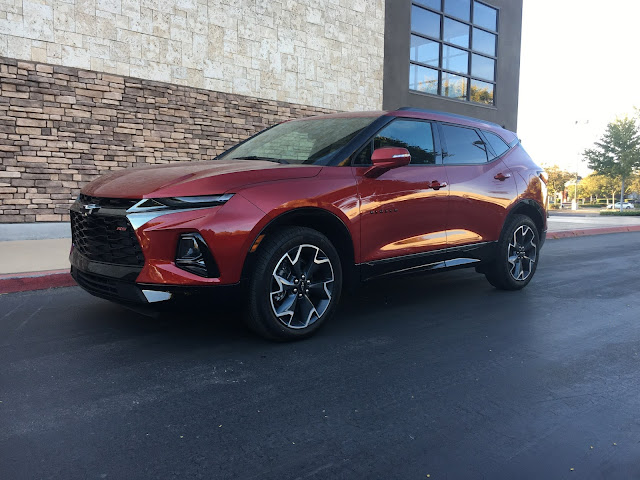 Thankfully, at least from my perspective, the Blazer doesn't sit too high. It has a reasonable minimum ground clearance of 7.4" so entry and exit wasn't difficult. The doors open fairly wide (as long as you're not in one of today's tightly spaced parking lots).

I am very impressed with the interiors in most new cars. The Blazer was no exception. Every surface looked and felt expensive. Time will tell how they hold up. 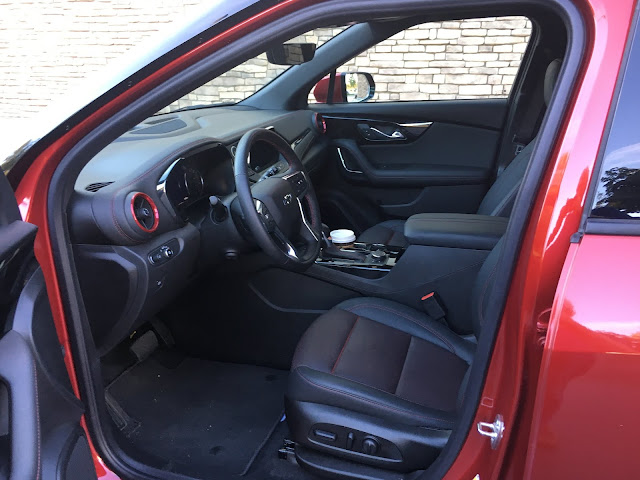 I generally found the controls easy to use even when driving. I was at first at a loss to find the temperature controls. Duh, they were staring me in the face. The two, big, round vents in the center were also knobs to twist! Nice touch. 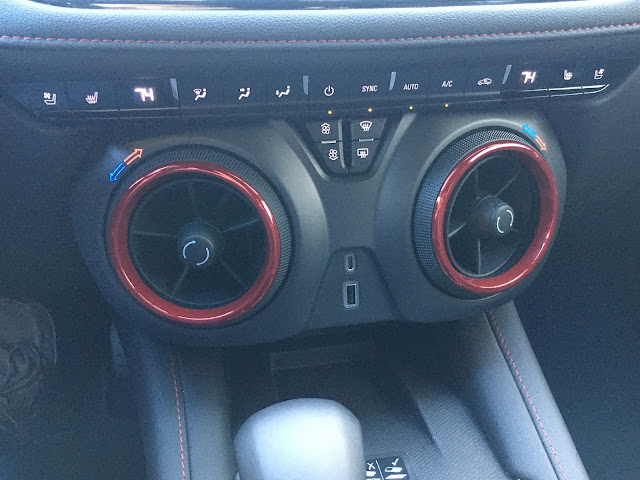 There was one thing that took me a minute or two to figure out; how to open the glove box. I could not find the latch. Then out of the corner of my eye, just to the right of the 8" touchscreen, I saw a little button that said "GLOVE BOX". I have never seen a power opening glove box before. I live and learn. 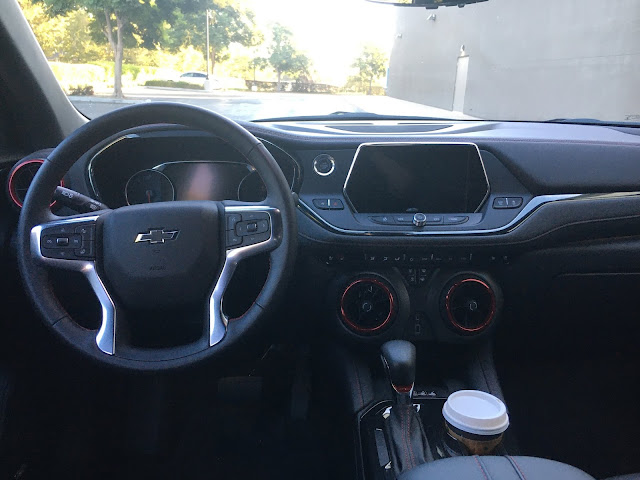 There are three engines available in the Blazer, a 193 hp 2.5-liter four, a 227 hp turbocharged 2.0-liter four, and the engine in the test Blazer, a 3.6-liter, DOHC V6 that produces 308 hp and 270 lb-ft of torque. The turbo engine with front-wheel-drive is the most fuel friendly but not by much, at least on paper. The V6 with AWD is rated at 19 mpg city and 26 mpg highway. I came close to the highway figure getting just shy of 26 mpg on the highway but the city figure was in the low teens.

I did like the V6's power and smoothness. At first I thought there was a V8 under the hood. The power is sent out through a 9-speed automatic. Although this was an AWD model I kept the mode in FWD except for one occasion. There was some torque steer when accelerating hard in FWD mode - it disappeared when in AWD. 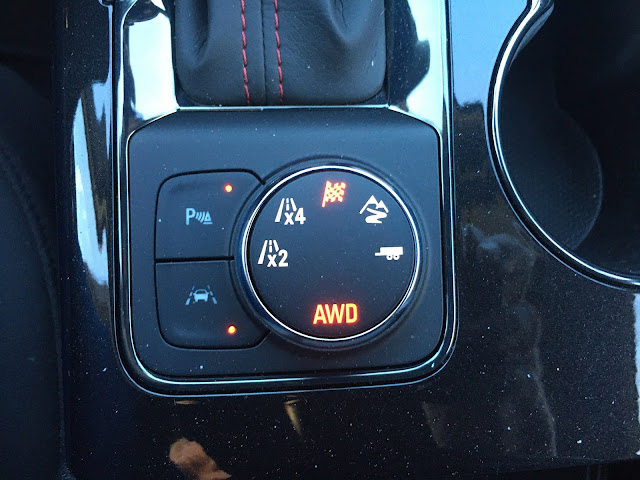 The switch to change drive mode seems pretty straightforward. From the left starting with 'x2' there is FWD pavement, AWD pavement, race (?), mountain roads or snow, and trailer towing (these are my assumptions of the little icons).

Trailer towing capacity is a maximum of 4,500 lbs. with the V6 and AWD, less, much less with FWD.