When is a Supra not a Supra? 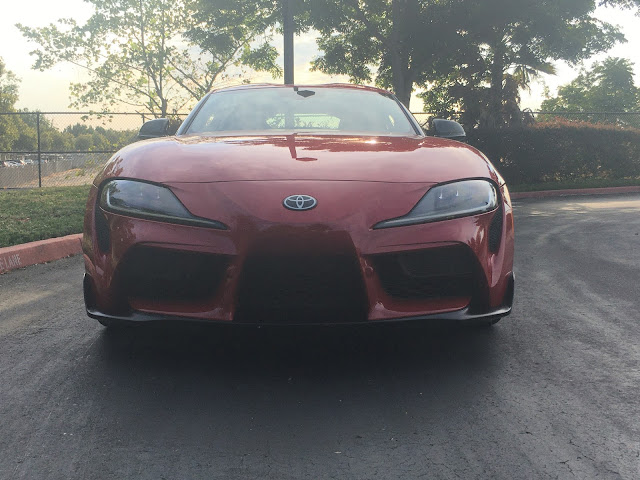 Toyota used to build a car named Supra. It was more or less a Grand Touring (GT) car, a car made for fast, comfortable, even luxurious travel. The first Supra was barely any of these, it was essentially a Celica with an under-powered 2.6-liter, straight six. I think it was a poseur designed to test the waters.

The next Supra, also based on the Celica but with some major upgrades, is my favorite. It's DOHC, 2.8-liter inline six was rated at 145 hp, with 4-wheel independent suspension.

When the third generation Supra was introduced it no longer shared a platform with the Celica. All Supras, from the very first until the end of production of the fourth generation were 2+2 models. As far as I'm concerned they are GTs.

To me a car model name shouldn't be applied to a totally different type. It just bugs me that Ford named its evidently wonderful e-Vehicle Mustang Mach-e (I've not driven one so I can't attest to its wonderfulness). Heck it bothered me when Ford introduced the Mustang II. So when Toyota announced the new Supra that wasn't like past Supras I thought, what?. Change is hard for me to accept sometimes.

It doesn't really bother me that the new Supra (I have think up another name for it) is built by BMW. It is in reality a redesigned Z4 (another car I have not driven). 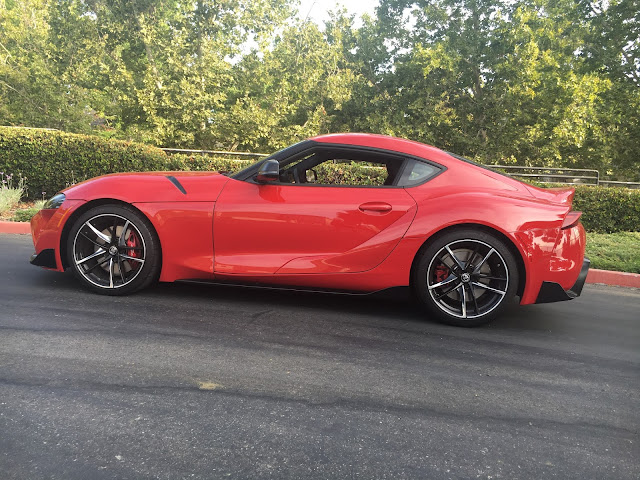 I'll say right here that I enjoyed the new Supra - with a few exceptions. First though I had to stop thinking about it as a true GT; it is a sports car, it might even be considered a road-going race car. It is a 2-seater. For this old guy it was difficult to get in and out of (if you've seen the video of an old guy trying to exit a Lambo you know what I'm talking about).

The engine makes such sweet sounds. Writers of old used to liken the sound of a Ferrari V12 to ripping cloth. The sound of a high strung inline six is similar. The 3.0-liter, DOHC, turbocharged I6 produces 382 hp @ 6,500 rpm. The only transmission available is an 8-speed automatic.

Is the Supra quick and fast? Do bears do their business in the woods? Car and Driver says the Supra 3.0 hits 60 mph in 3.8 seconds, does the quarter mile in 12.1 seconds, and tops out at a computer limited 160 mph. I did not put a stopwatch to the Supra but on a relatively short on-ramp (maybe a 1/8 mile?) from a dead stop until merging into traffic I saw 94 mph! For the first time in a long time I had to brake to merge.

There are two settings for the Supra, every day and Sport. Sport changes exhaust note, ride and handling, and who knows what else. I know folks in the north east think California roads are smooth as glass but that isn't true. Many of our roads are crap. The Sport setting was unreasonably stiff and harsh. I used it once or twice just to see what it was like and after just a few miles had to switch to the more benign 'normal' setting.

Can I say something about the owner's manual, in fact most owner's manuals? Generally they suck. I tried to find out how to change the brightness and/or contrast of the center screen. Never did. When an owner's manual is like War and Peace and you still can find what you want there's a problem.

The Supra, like so many cars today, has about a zillion buttons and little knobs. I wear glasses to read; I do not need them to drive. Yet in order to see many of these controls I need my glasses! Many of these buttons, knobs, and touch screen controls require taking your eyes off the road to find them. It's ironic that you can't enter info into the Navigation system when driving but you can hunt for the screen to change the SiriusXM channel.

There were some exterior styling accents I could do without, faux vents. Faux vents here, faux vents there. Sorry Toyota but they just look stupid, like some stick-on stuff you'd find in the 'make your car look neat' aisle at the auto parts chain store. 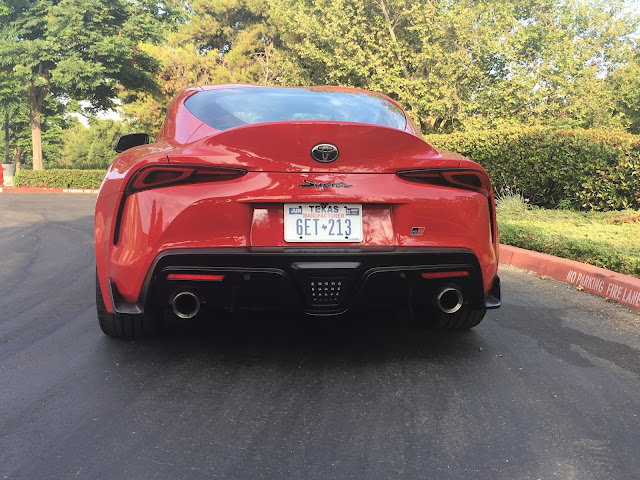 So when is a Supra not a Supra? When it is a sport coupe with only two seats. No matter, it's still fun.