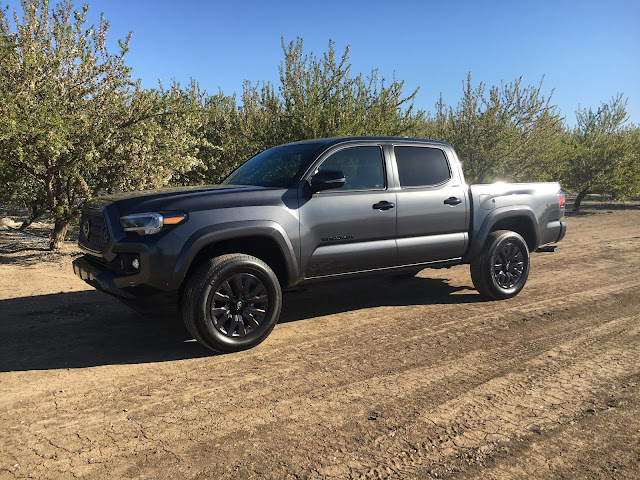 The 2021 Toyota Tacoma would almost be the perfect pickup for me. Only four things keep the test Tacoma from being ideal for me and I’ll get to them at the end of this article. None of them are fatal.

I will say that I seem to be in the minority in my opinion of the Tacoma. 2020 Tacoma sales were about 240,000 units (down slightly from the previous year like most makes/models). The next closest competitor was 100,000 + down from that number. So although the Tacoma is way off the F150’s numbers, in the mid-size market it rules. 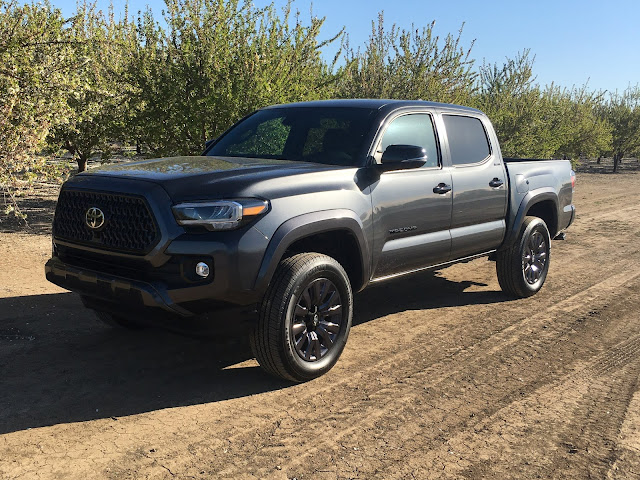 I’ve been a Toyota fan since the early ‘70s; I’ve owned eight. But nothing new in years. So whenever I’m offered a Toyota product to review I never, ever say no.

Which brings me to the 2021 Tacoma Limited 4X4 Double Cab “Nightshade Edition”. That’s a long name right? Nightshade is a trim package that includes 18’ Dark Smoke Wheels, Black Wheel Locks & Lug Nuts, and a bunch of black trim pieces. I prefer the blacked out trim to the chrome that is standard.

The Double Cab is a true four-door with seating for five, two up front and three in the rear. There are two bed lengths available – 73.7” or 60.5”. I’d opt for the shorter because it makes the truck itself shorter, down from 225.5” to an easier to maneuver 212.3”. If you use the Tacoma as a work truck you’ll probably go for the longer bed. 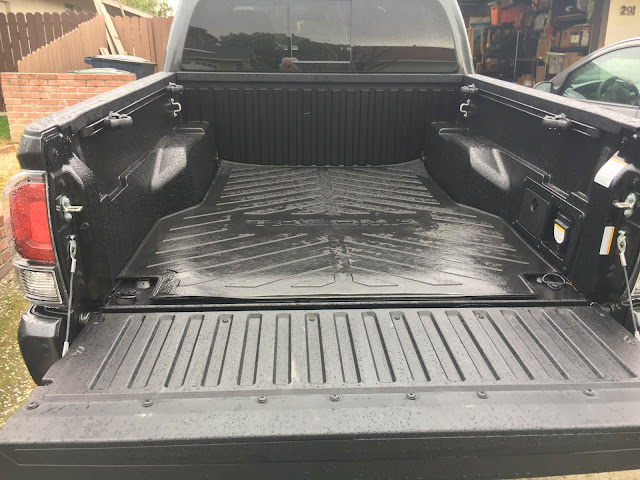 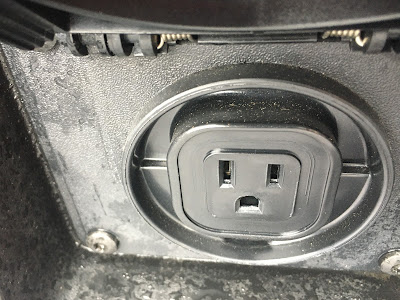 The test Tacoma was a 4X4, something that many people seem to prefer even where the weather is not severe. I have no idea why. Most 4WD vehicles are never taken off-road. But unlike 4X4s of old there is little extra maintenance, or complicated engagement, required for many 4WD vehicles. Remember when you had to get out and manually engage the front hubs, then with the wheels straight shift into 4WD? And as routine maintenance you had to take the front hubs apart to lube them. No more. On the Tacoma there’s a dial on the dash to select 4WD. Easy peasy. 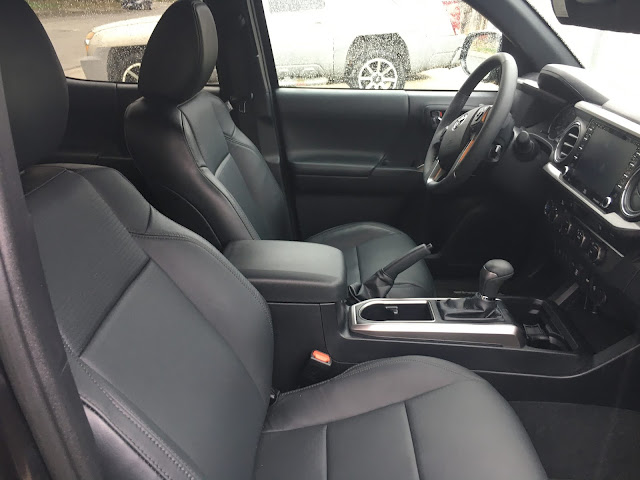 The Limited package moves the Tacoma upscale. There’s leather trimmed seats (power driver seat), premium audio with JBL speakers, 8” touchscreen, plus, plus. Thankfully Toyota doesn’t overdo it; this is a truck after all. The interior is all black (or dark charcoal gray), and it looks easy to maintain. The floor mats are thick rubber and made to hose off (out of the truck of course).
One little feature that I never noticed on other vehicles was the cup holders in the rear door panels. Many vehicles have cup holders in rear door panels but these allow you to put tall bottles – wine bottles – in them. Now this is of great importance to me as I've had two wine bottles clink together on a rear seat with one of them breaking. Oh the joy of having a car smell like Merlot!

I’m not sure why all 4WD trucks and SUVs need to be so high. Every Tacoma has 9.4” of ground clearance (even on 2WD!). I’ve driven many 4X4 makes and models from the ‘60s to now. They really don’t need to be so tall. A Jeep CJ5 had 6.89” of ground clearance. I drove one as a service vehicle during Connecticut winters in the late ‘60s; I never got stuck. You young folk may enjoy climbing up into a seat but not me. As I told someone recently “I got aches were I didn’t even know I had body parts.”

I enjoyed driving the Tacoma 4X4. It’s responsive with good sight lines all around. The engine sounds great when you floor it. The seats were comfy with one exception. Even with the lumbar support fully deflated I found it too stiff.

So why isn’t the Tacoma Limited 4X4 my ideal pickup? First I have no need nor desire for a 4X4. It also sits too high. The manual transmission seems to be only for dedicated off-roaders. I’m also not a fan of the styling, particularly the nose. But as I said many, many do not agree with me.

In the Tacoma's favor it is a Toyota. With proper maintenance it will last forever. And that is a huge plus.

When it comes to price I always have to reboot my brain as it seems to be stuck in the past. A Tacoma Limited 4X4 Double Cab lists at $41,980. The Nightshade Edition adds $1,000, and other options and delivery charge bumps the final price up to $45,847.

You can get a base Tacoma (2WD and 4-cylinder) for $26,250 if you just want a basic pickup. Hundreds of thousands have put down their hard-earned money for a Tacoma. You can’t argue with that.