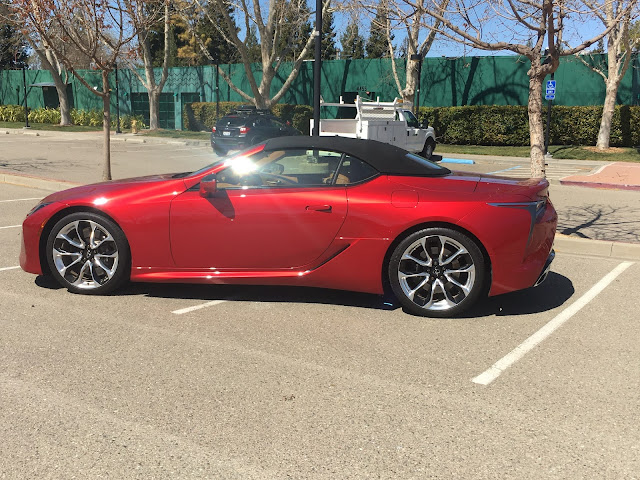 The engine delivers its power to the rear wheels through an excellent 10-speed automatic transmission. You can shift it yourself with the paddle shifter if you desire but unless you are driving switchbacks connected with short straights I don't see the need.

Front and rear suspensions are both independent. The brakes are more than up to the task of slowing the 4,540 lb LC from even triple digit speeds. Front rotors are 15.7", and the calipers have six pistons; the rear rotors are14.1", and the calipers are four piston - that's race car brakes. Tires are massive 245/40RF21 front and 275/35RF21 on the rear.

The interior was sumptuous. The seats, part of a Touring Package, were trimmed with semi-aniline leather (leather dyed exclusively with soluble dye; I had to look it up).

All these things were great but then there were the parts that brought love down to like. There was a time when reviewers would comment on the ability to judge where the ends of a car were; you know so you don't have to park by Braille. As far as I could see from the driver's seat the LC 500 ended at the windshield. Of course it didn't really but I couldn't tell. Now a lot of cars have sensors that warn you when you're getting too close to the nose or tail (or sides) and that helps but I still like to know where the extremities are, like is the front valance close to the curb when parking. Standard curb height is 6" (the curb at my local post office is a tad over 8") and the ground clearance on the LC 500 is 5.2". There is a system that should alert the driver that the car is too close to something. It works when the car is perpendicular to something in front of it; I pulled into an angled spot and scraped the front valance - no warning.

I think the LC 500 is made for valet instead of self parking. In many parking lots the standard parking space is 9' wide. Now this should be enough seeing as the LC 500 is only 75.6" (6.3 ft) wide but the doors on the LC 500 are about 56" long. So it would be best to either park in an empty part of the parking lot or let the valet park it.

Now comes the kicker, at least for me. It is the dreaded Lexus touch pad. I do not like touch pads, my fingers do not always work on them. And I find it impossible to adjust anything using the touch pad when driving. And there is a lot of stuff that is only adjustable through that darn square. The LC 500 had something called 'Climate Concierge' that automatically adjusts the seat warmers/coolers, headrest heater, and steering wheel heater depending on the temperature set. That might work for some folks but as my wife and I like totally different settings I had to access the control screen and set them all separately, and that meant parking so I could steady my hand (that touch pad is sensitive), lick my finger (helps it to work on touch pads and/or screens) and reset everything. Now maybe the voice control might overcome this problem but I often have trouble with voice control.

Convertibles are known for being somewhat flexible. I did not expect the LC 500 to experience any body flex or twist but over an admittedly rough road there was some creaking evident in the driver's side windows (I pressed my hand against the door window and the noise went away).

If it matters the fuel economy is rated at 15-mpg around town and 25 on the highway. But with an engine that sounds so sweet who cares?

So like I said, I really wanted to love the LC 500 Convertible. But I just couldn't.