Just last week I tested another Trailblazer. No changes except for color. The Trailblazer is a good-looking, perfectly sized SUV for a couple or young family. I still don't understand why Chevrolet uses a three-cylinder engine. I don't see any real advantage to it.

This Trailblazer had the larger 1.3-liter, 3-cylinder turbo engine with a 9-speed automatic.

The Trailblazer had a setting that retained the best fuel economy. Somehow someone got just over 50 mpg. That is more than 20 mpg over the highway rating of 30 mpg. I equaled the rating.

I drive test vehicles in the real world. When I check fuel economy I usually set the cruise control at 70 mph and drive between 60 and 100 miles. I would say that most of the time I equal or better the EPA highway figure. That was the case with the most recent Trailblazer; I got 29.7 mpg.

I also want to say something about 'performance'. It seems to me that ultimate acceleration gets too much attention. When I'm driving a family style vehicle I don't care what the 0-60 mph times are or the top speed. I'll report the numbers others have provided but I'm more concerned with a vehicle's ability to comfortably and safely merge into traffic. So far even the slowest cars I've driven are more than capable. 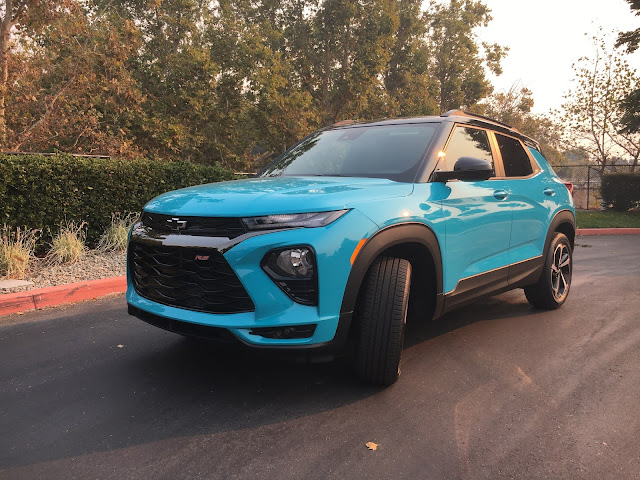 Sometimes I wonder if there really is a need to review new vehicles anymore. Let’s face it, there are no bad vehicles.

The Trailblazer is one of the smaller SUVs but not Chevrolet’s smallest (that would be the Trax). It’s about the same size as a Toyota C-HR. I call them sane-sized, at least for me. They are small enough that you can park them almost anywhere, easy to get in and out of, and large enough to carry most of the junk you take with you on a trip. (I say junk because I think we generally take way too much stuff with us.) 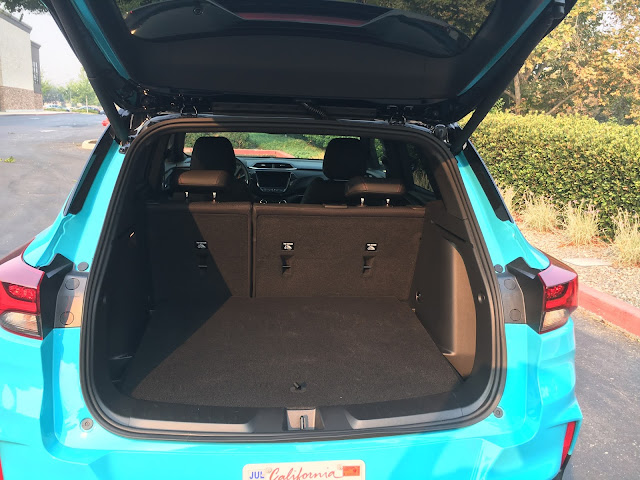 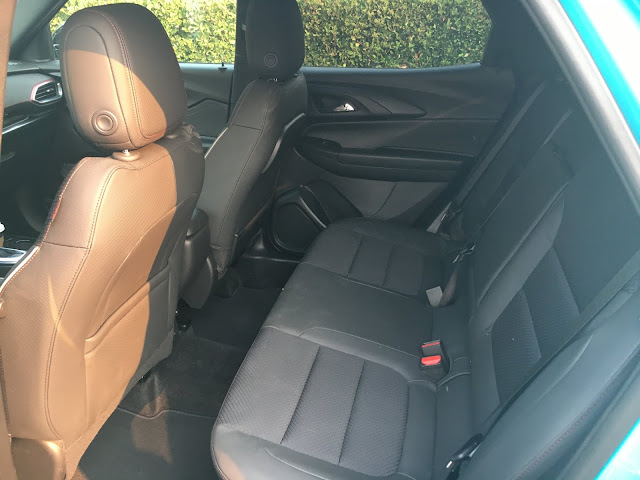 The Trailblazer has two of the smallest engines available in this segment. Both engines are turbo-charged - the 1.2 has 132 hp and 162 lb-ft of torque, while the 1.3 ups that to 155 hp and 174 lb-ft. Chevy seems to want to keep the fact that the only engines available are 3-cylinders; I couldn’t find a mention of the number of cylinders on either the public site or the media site.

I did not put a stopwatch to the Trailblazer but it performed okay, at least to my seat of the pants. A certain magazine called its acceleration “yawn-inducing”. Well it isn’t a race car for sure but they did say it hit 60 mph in just under 10 seconds. Back in the dark days of the late ‘70s and early ‘80s sub-10 second runs were considered not bad. If I wanted a performance car I wouldn’t buy an SUV.

Fuel economy is rated at 26-mpg in the city and 30-mpg on the highway. I saw an indicated 29.6-mpg on a round trip of about 70 miles, mostly highway with about 5-6 miles of city driving. I didn’t speed (well not too much) but I tried to keep a steady pace of 70 mph on the highway.

One little plus is the AWD is not full-time; there is a switch to engage it.

You can tow with a Trailblazer but you’re limited to 1,000 lb. That’s not much but you could tow a personal watercraft or a small tent trailer.

The ride was decent. The same magazine that said the Trailblazer was slow also said the ride was harsh. I did not find it harsh at all.

Can I say something about the color of the test vehicle? I hate it. Chevrolet calls it “Oasis Blue.” I don’t know about you but blue is not the first color that comes to mind when I picture an oasis. I see a lot of sand, some palm trees, and a small water source. Actually I think the shade of blue used is kind of like that used on some swimming pools. I did a short, non-scientific poll of some friends, 50/50 on the color.

One small complaint that a change of color will not fix - I did not like the fuel gauge. I like gauges that you just have to glance at to know what’s what. The Trailblazer’s fuel gauge shows a series of small boxes in an arc; one by one they disappear as the tank gets emptier. I’d prefer a needle.

But then there’s the engine choices. Looking at some competition, and all of them use a 4-cylinder, I don’t see that the Trailblazer has an edge in fuel economy so what is the point of using a 3-cylinder engine? Many of the competitors not only equal or better the fuel economy but they out accelerate the Trailblazer as well.

As I said at the start, there are no bad vehicles. But there are some I might not recommend. It bothers me that the Trailblazer falls into this category. I wanted to like it. Sure the color wouldn’t be my choice but I like the style. The interior was comfortable and well laid out. It is a size I like. But it seems like they used a 3-cylinder engine just because.

If you’re interested in a Trailblazer they start at $19,995 for a base L 2WD model up to $27,445 for either an Activ or RS model with AWD. Equipped like the test vehicle, with destination charges, the price as per chevrolet.com went up to $32,795. 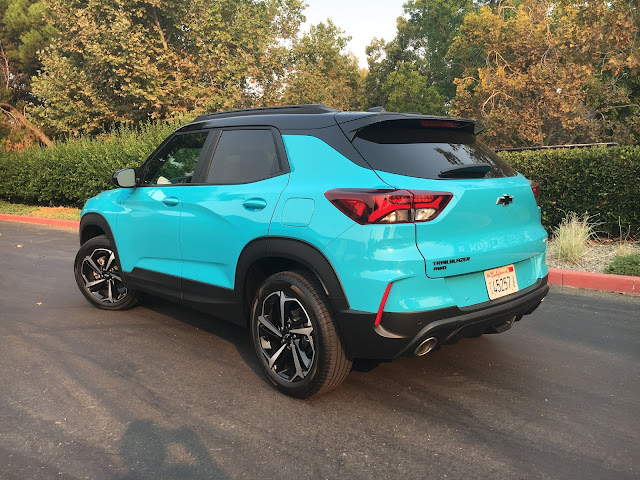 M209 said…
I’d have to say “Nope” on this one, Bruce. Get the impression it’s trying to be a grownup Smart car or something.
I bet plenty of young women will be thrilled to get this for graduation in the spring. And three cylinders. For the price, wouldn’t touch it.
August 24, 2020 at 7:26 PM