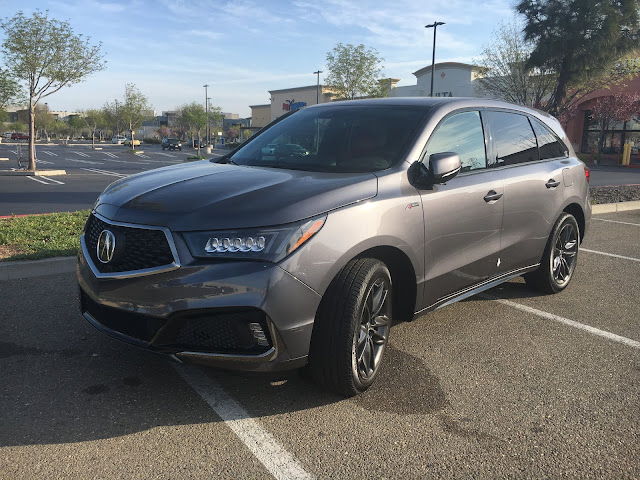 One of my first thoughts when driving the 2020 MDX was, "Acura made the right decision years ago to not develop a V8." Way back in 1989 Toyota stunned the world with the introduction of the Lexus LS400 with its 4.0-liter V8. Acura had introduced the Legend in North American three years earlier. But the Legend only had a V6. When the second generation Acura Legend came out in 1990 it still only had a V6, albeit a very good V6. There were discussion within Acura about the need for a V8 to compete with Lexus. I'm willing to bet that a V8 was designed but Acura decided to stick with the V6. In hindsight it was a good decision.

So here we are, thirty years later, with tightened emissions and fuel economy standards and Acura has honed their V6 to new heights.

Which leads me to the MDX's 3.5-liter V6 that puts out 290 hp @ 6,200 rpm, and 267 lb-ft at 4,700 rpm. The only transmission available is a 9-speed automatic. Most of my driving was done in Sport mode and I have to say that the engine seemed more powerful than the stated numbers. And it made really sweet sounds, especially when the VTEC kicked in. Magazines say an MDX will do 0-60 mph in about 6.5 seconds. That's darn good for a vehicle that weighs just under 4,300 lbs.

I found the interior nice but nothing exceptional. The seats were comfortable, easy to get in and out of but there was nothing that wowed me.

There was much to confuse me though; as in controls. I am so over high-tech that demands my attention. Little buttons and switches all over the place, many that I had to get the owner's manual out to even know what they did. And then there was the touch screen.

At least my "zombie fingers" worked on the touch screen. But the functions that were only accessible on the touch screen were too many and hard to use when you're driving. Keeping my eyes on the road is darned important; that's what makes knobs - large knobs - so useful. I know I'm old but technology should be dead simple to use. Now maybe there are some out there who can fiddle with the touch screen while they drive but I can't. Does any designer out there understand how easy it is to just reach over to turn a dial as opposed to scrolling through screens to find the right place to change the darn radio? 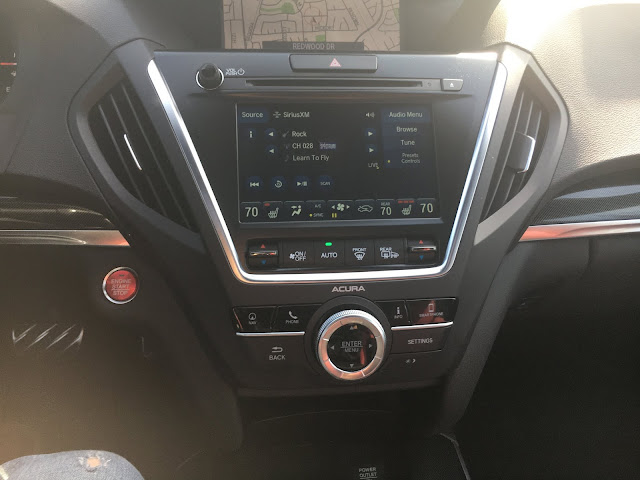 I did appreciate that the GPS map had its own screen. When I have SirriusXM turned on I like to see the song information and on many vehicles you either have GPS or the sound system showing but not both.

I did go through some of the controls and basically turned on everything I could find even all the nanny stuff. It's nice that you can turn this stuff off if you want. 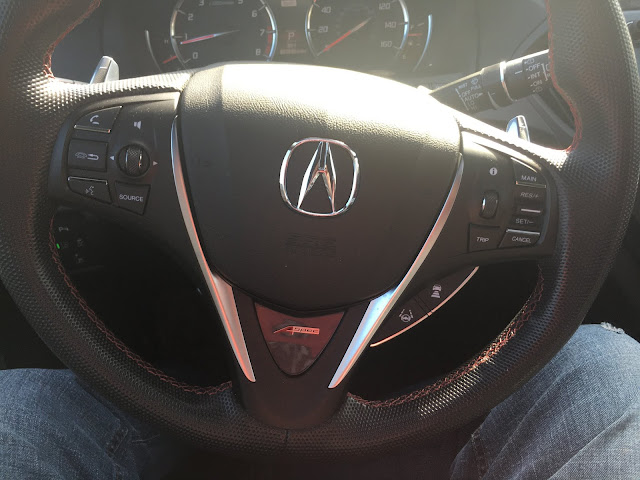 Despite all the controls on the steering wheel the only ones I actually used were the cruise control. You can see the paddle shifter levers poking up behind the steering wheel - I never used them. As far as I'm concerned they are an affectation for those who want to feel like they're driving a race car.

The test MDX was AWD or in Acura-speak Super Handling All Wheel Drive (SH-AWD). Front-wheel-drive only is available on the base model. I don't really see the need for AWD but I don't see a down-side to it either. The fuel economy penalty is negligible.

Speaking of fuel economy the base MDX is rated at 20-mpg city and 27-mpg highway. SH-AWD knocks that down to 19 and 26. A-Spec, possibly due to the bigger tires, goes down to 19 and 25. I did not confirm the ratings.

The tires on the A-Spec are 265/45R20 mounted on good-looking aluminum wheels. Besides the 20" tires you get a lot of trim changes and - drum roll please - heated and cooled front seats in the A-Spec package. According to the public Acura web site the "A-Spec is designed to make you stand out ..."

Acura calls the MDX a "Three-Row Luxury SUV." At least with the A-Spec I'd change that to a sporty SUV (that would make it a sporty Sport Utility Vehicle). Not that it isn't luxurious but that it is sport oriented.

The utility side of the MDX is its ability to haul stuff. That's 250 lbs of concrete in the cargo area - it didn't faze the MDX. In fact I didn't even notice a difference in the ride. With the right equipment the MDX can tow up to 5,000 lbs. 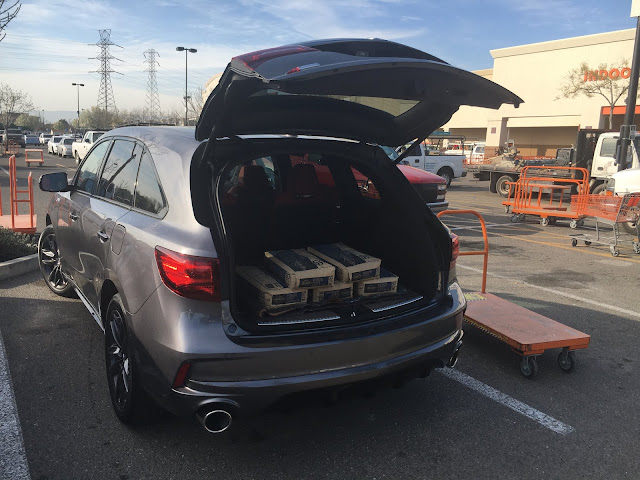 There are things I don't like about the MDX (the confusing, hard to locate controls) but all and all I enjoyed the car. I know that the MDX will last just about forever so if it fits what you're looking for put it on your list.