Lincoln is the official sponsor of the AFAS Reception and they do a great job. The venue is terrific, there's a hosted bar and hors d'oeuvres. But the stars of the show are the many artists whose art graces the pavilion. 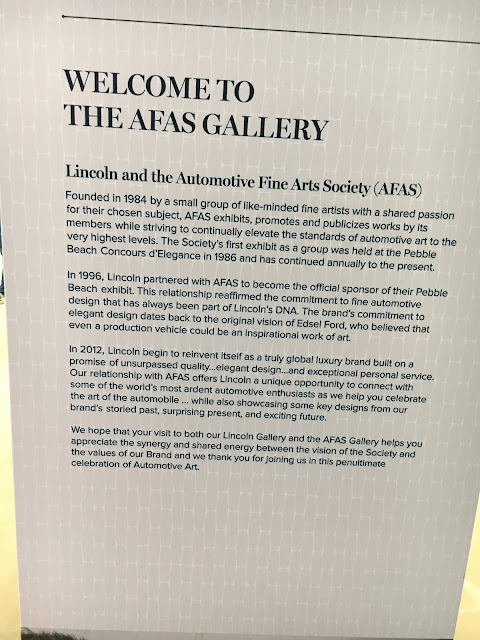 There are signs requesting that you do not photograph the art without the artist's permission. Due to the crowds I decided not to take any photos of the incredible art. To simply call it "car art" is not doing any of the artists justice. It is art. What is a better subject than something that touches an artist's soul?

I did take pictures of some of the Lincolns. And of two artists that I admire. 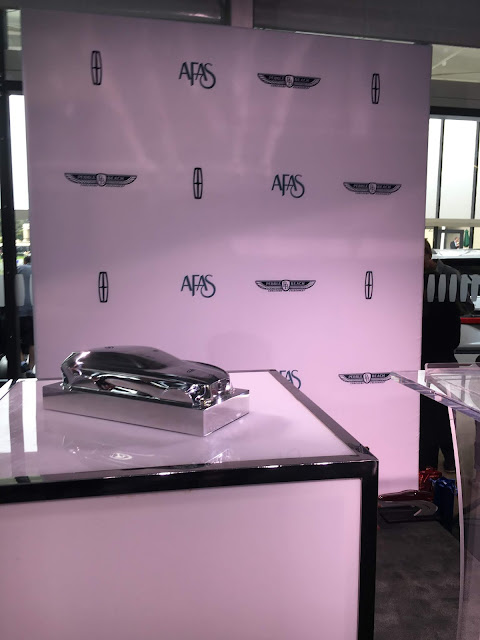 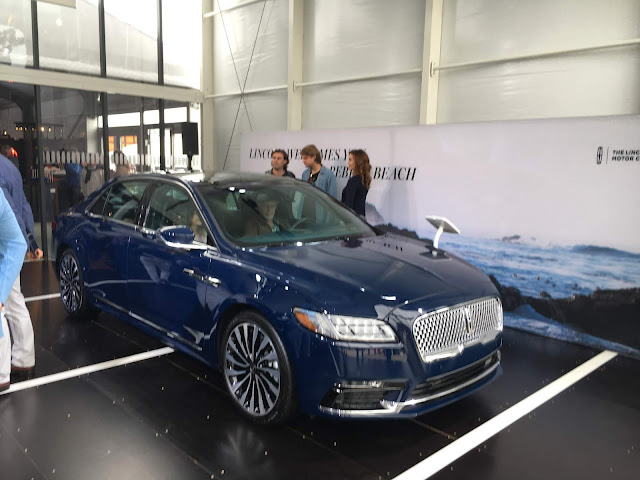 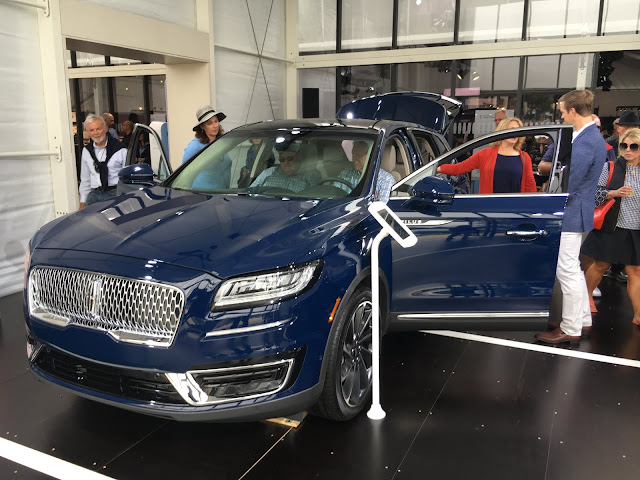 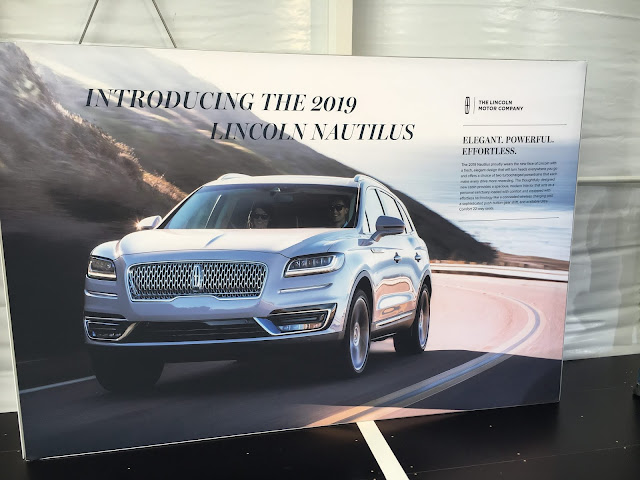 The first artist is William Motta. Those who poured through Road & Track know Mr. Motta. We grew up with his art in R & T's pages. Looking at what he had chosen to display literally brought tears to my eyes reminding me of years gone by and how his art brought life to so much. Thank you Mr. Motta. 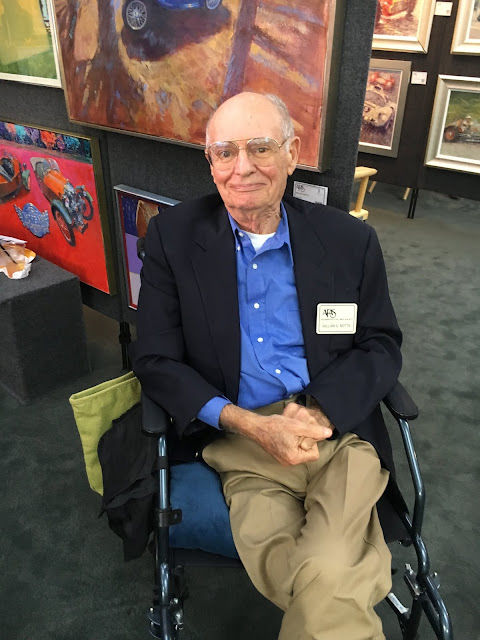 Next is Ken Eberts and his lovely wife Liz. I interviewed Ken a couple of years back and found him to be a very interesting man.

You might wonder why he is dressed as a train engineer. But take a look at the work behind them, that is the San Diego Santa Fe Train Station. Along side the painting are photographs of Ken and Liz at the station back when they were just kids. This is the kind of art Ken does primarily, art that goes back in time (not to say he doesn't do current themes).

I told Ken that when I get rich (as if that's going to happen) I'm going to commission him to do a piece of my Ranchero and call it 'Unfinished Project'. I think that would resonate with many out there. This is the only picture I took inside the gallery. It shows just a small portion of the art work. 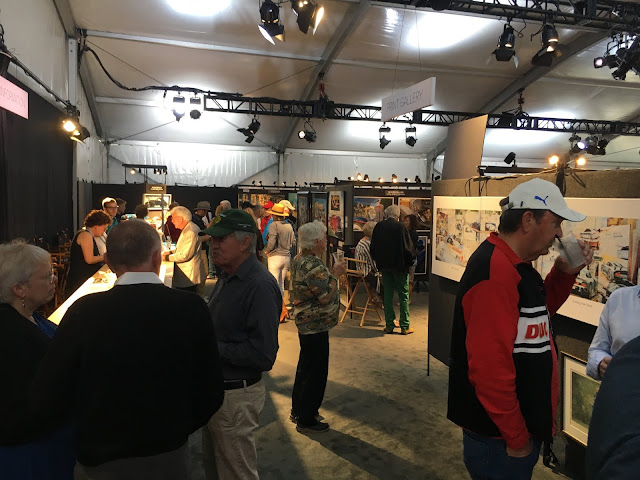 I arrived late for this strange Concours (whether it is the Concours, the entrants, the promoter or all three that is strange is open to debate). So I didn't get the complete strangeness. But here's a few of the strange. 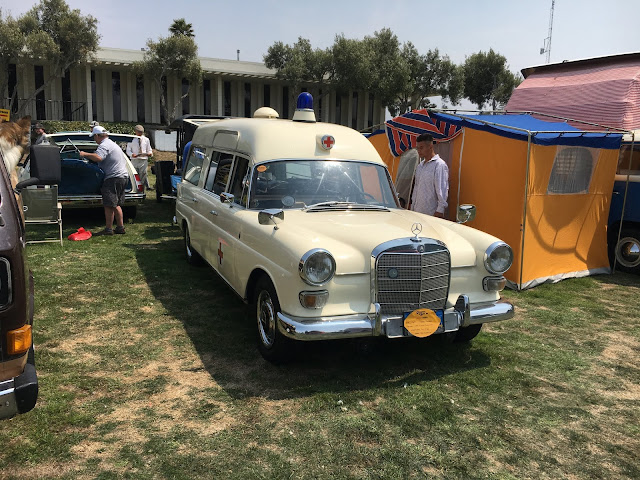 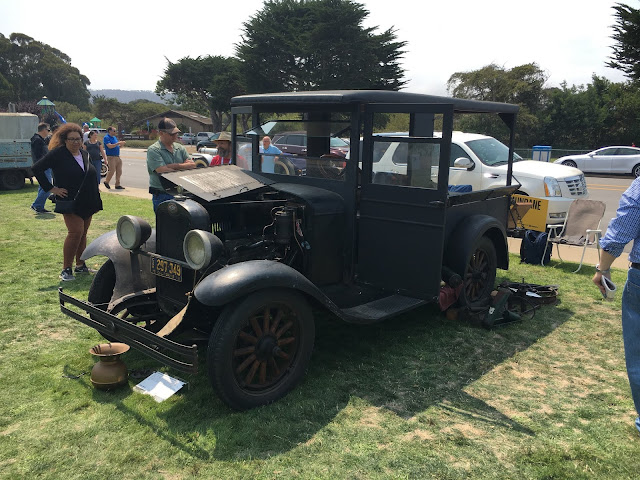 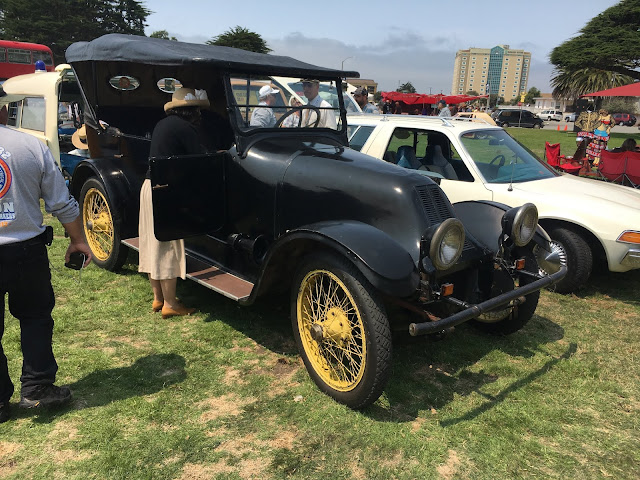 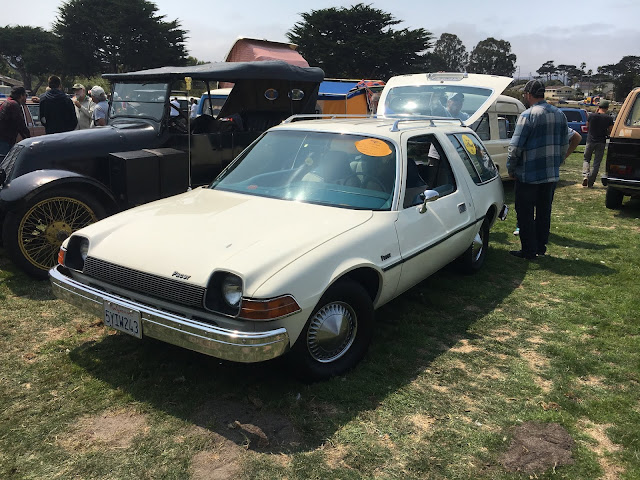 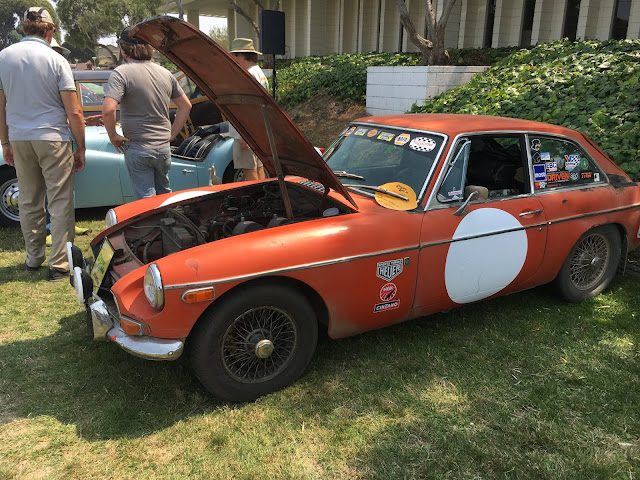 Pebble Beach Classic Car Forum - Big In Japan: Future Collectibles from the Model A to the 240Z

No photographs from here. This was one of many forums put on and the only one I attended. It was an interesting talk with an impressive panel.

Ed Loh (Moderator) has more than 17 years of experience in automotive journalism and has held leadership positions as editor-in-chief of Import Racer! Magazine (2003), managing editor of Road & Track Speed magazine (2005), and editor-in-chief of Sport Compact Car (2006). Loh moved to Motor Trend in 2007 and became editor-in-chief in 2011. In his time with Motor Trend, the brand has become more than just the leading automotive enthusiast magazine and is now the industry leader across the web, social media, and video. In 2016, Loh was promoted to senior vice president, in-market content for Motor Trend Group, overseeing the editorial direction of Motor Trend and Automobile magazines, and this April his role was expanded to include automotive content for all of the Motor Trend Group. In his spare time Loh enjoys surfing, cooking, and driving his Porsche 930.

Tom Matano has thirty years of experience in the automotive design industry. Prior to joining the faculty at the Academy of Art University, he held design positions at General Motors Design in Michigan, GM Holden’s in Australia, and BMW in Germany. In 1983, he became the Chief Designer at Mazda North America, and he went on to become VP of Design and EVP of the Western R & D operations. From 1999 to 2002, he was an Executive Designer at Mazda Headquarters in Japan. Matano currently serves as the Executive Director of the School of Industrial Design at the Academy of Art University.

Randy Nonnenberg is the Co-Founder and CEO of Bring a Trailer, the leading online auction venue and community dedicated to historic, special interest vehicles. BaT Auctions has handled the sales of hundreds of collectible Japanese cars and trucks, ranging from a Toyota 2000GT to a preserved Honda CRX and everything in between. Randy is a noted expert on their values and appeal, as well as trends in the marketplace.

Eric Bizek is the host of Motor Trend’s hit series, JDM Legends. Born of a passion for classic Japanese vehicles, Eric founded his Salt Lake City shop, JDM Legends, almost 10 years ago, in 2009. Bizek now serves as one of the only restorers of imported Japanese domestic market cars in the United States. With 20 years of restoration experience under his belt, Eric alongside his skillful team, build, create, customize and sell classic Japanese automobiles including Hakosuka, Kenmeri, Celica, Skyline, Fairlady, Bluebird, Trueno and Cosmo.

RJ de Vera is a former editor at Super Street magazine, RJ de Vera became well immersed in the automotive industry. De Vera was a consultant and actor in the first Fast and Furious film, helping to launch one of Universal Studios’ most successful movie franchises. Over the last decade, de Vera has consulted on numerous projects within the automotive aftermarket community and has served as a spokesperson for major brands such as PepsiCo, Xbox, Valvoline and various OEMs. De Vera has served as an automotive stylist for more than 30 high profile vehicles and remains active within the car hobby. He currently holds a position as a Marketing Leader at Meguiar’s, leading Global Communications and Digital Marketing efforts.

Alfonso Albaisa is Senior Vice President for Global Design for Nissan Motor Co., leading global design teams to reinforce a common essence across all models within the Nissan, Infiniti and Datsun brands and deliver inspiring and exciting designs for customers. Albaisa is a Cuban-American who takes a multicultural approach to design. He has spent his entire career, since 1988, at Nissan, where he has risen to become one of the leading automotive designers in the industry. Prior to becoming NML’s head of global design, Albaisa served as Executive Design of Director at Infiniti, leading that premium brand’s new design language.

I really didn't hear anyone suggest any really out there cars might become collectible. There were the usual suspects and some rarer (especially here in the US) Japanese cars but I think we all know what they are - think Datsun 510, 240Z, first gen Miata and RX7, early Celicas, etc.

I wonder if some of the smaller cars such as the Datsun B210, Toyota Starlet might one day actually be worth some money.

Two comments that stand out are, first from Albaisa (and I don't know if he coined this or not) that great design comes from knowing when to lift your pencil from the paper. And from Matano when asked about passion for cars he said "if when you park your car and start to walk away you stop and look back at it" that is passion. (I look back at the Lumina and think, "Darn it's ugly. But I still love it.")