A Team of Horses 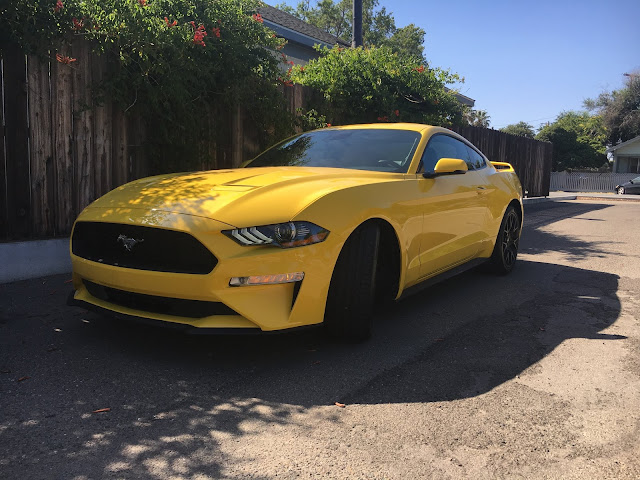 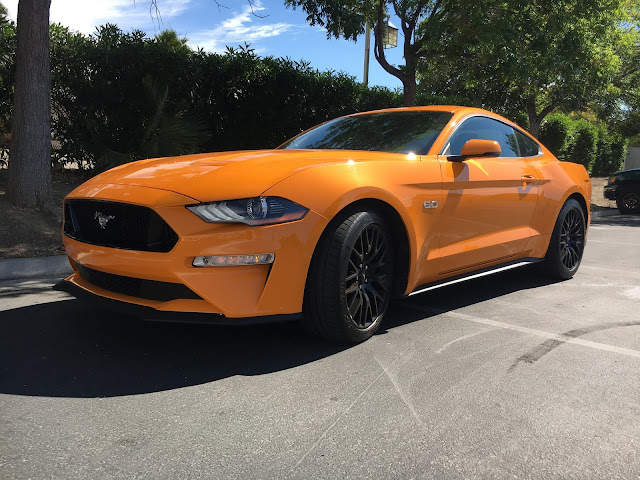 If it wasn't for the "5.0" badge you couldn't tell the difference - Until you started the engines.

Two Mustangs; different but the same. One with a four-cylinder the other a V8. I’ll start with the 2.3-liter EcoBoost 4-cylinder because it’s the first one I tested.

The first thing you have to do is erase from your mind the thought that the EcoBoost four-cylinder is an economy engine. In 1989 I bought a 5.0 Mustang, a 225 hp V8 that won rave reviews for its performance. The EcoBoost puts the old pushrod 5.0 to shame with its 310 hp and 350 lb-ft of torque.

Performance tests back in ’89 put the 5.0 at 6.5 seconds to 60 mph and a top speed of 142 mph. Tests of an ’18 Mustang EcoBoost with the 10-speed automatic say it will hit 60 mph in 5.3 seconds. Top speed of the EcoBoost is limited to 123 mph according to other testers. By any test the EcoBoost is a performance car.

The two ’18 Mustangs are identical in size – 188.5” long on a wheelbase of 107.1”, and 54+” high (slight difference between fastback and convertible). The biggest difference is in weight; at 3,532 lbs. the EcoBoost is 173 lbs. lighter than the V8. That’s less weight on the front wheels so at least in theory the EcoBoost should handle better. 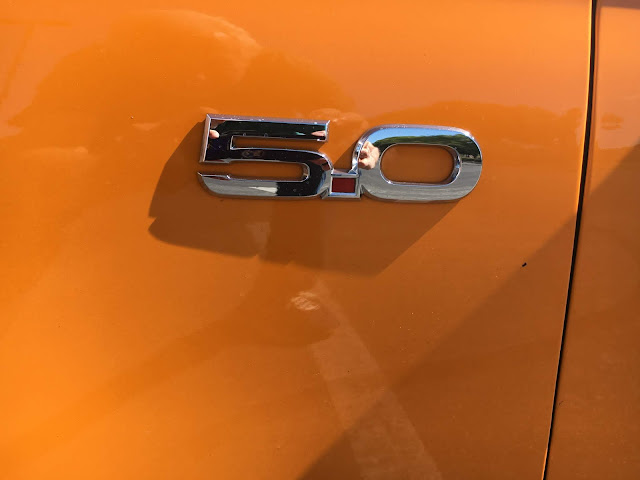 The badge says it all.

Then there is the new 5.0. OMG! It is quick and fast. Standard output is 460 hp @ 7,000 rpm and 420 lb-ft of torque at 4,600 rpm. The 5.0 I drove was a 6-speed manual which I prefer over the automatic simply because I like to shift. Ford says the 5.0 with the 10-speed automatic will hit 60 mph in under 4 seconds, slightly slower with the manual transmission. I don’t use a stopwatch (it’s a little difficult to hold a stopwatch, watch the speedometer, and drive all at the same time) but I know it is quick. I had a little stop-light to stop-light run with a Grand Cherokee SRT and although it was close the ‘Stang was ahead.

One thing I absolutely loved about the 5.0, and probably the one thing that would get me in trouble, was the sound of that DOHC Coyote engine at speed. Not the raucous exhaust but the scream as it approaches redline. It really made me want to keep my foot in it and that in turn would ultimately lead to speeding tickets.

I could live without the loud exhaust though. Teddy Roosevelt famously said, “Walk softly and carry a big stick.” A little burble is nice but for me this was just too much noise all the time. It seemed a little boy racer to me. To be fair to Ford there is a switch (well not exactly a switch as it’s part of the computer program accessible through a menu on the instrument panel) that changes the exhaust noise level. I couldn’t figure out how to access it because a) there was no owner’s manual, and b) I didn’t look it up on the Internet. Even if I had known how to access the menu I would have had to do so in a shaded spot – the glare on the instrument panel was terrible. I could see the large gauges (tach and speedo) but the little stuff was easily obscured. And then there were the two gauges in the center of the dash – impossible to see in the sun. 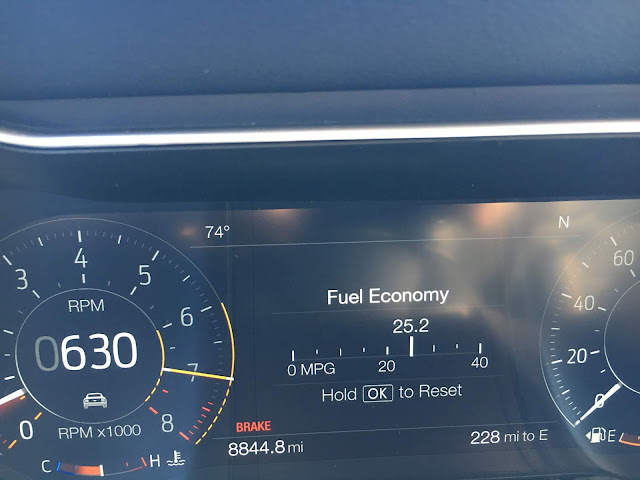 Depending on the angle of the sun there is just too much glare on the instruments. 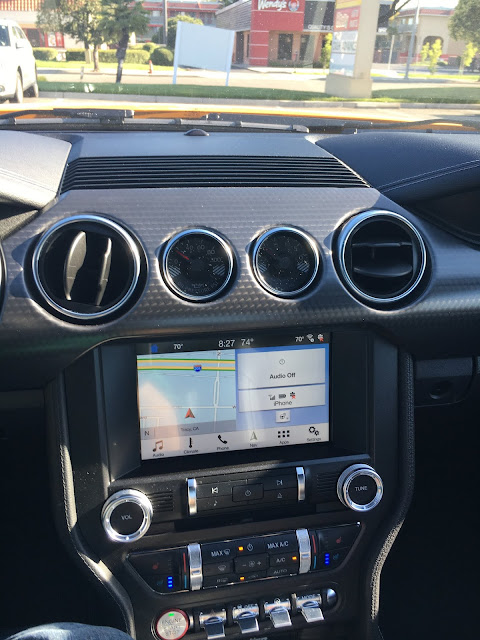 And these two gauges were just about useless during daylight hours.

There are a wide array of wheels and tires available for either the EcoBoost or the 5.0. The test EcoBoost had P255/40R19s all around while the 5.0 was shod with P255/40R19s on the front and P275/40R19s on the rear. Any of those are huge tires. Normally this is where you’d read my rant about super-low profile tires and how stiff they are, and make no mistake the sidewalls are very stiff. But it was the combination of tires and suspension that got me. 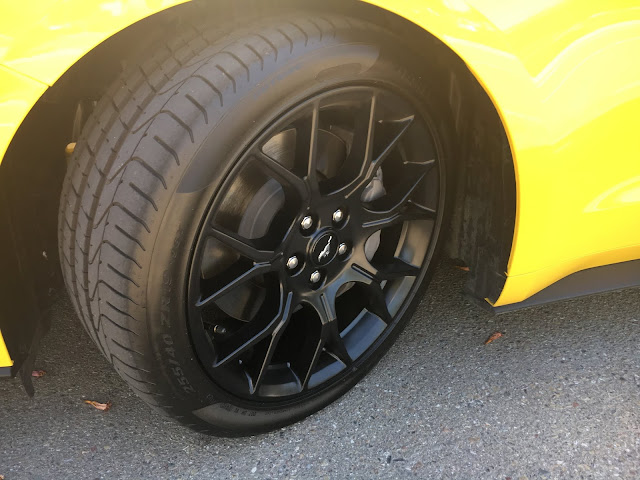 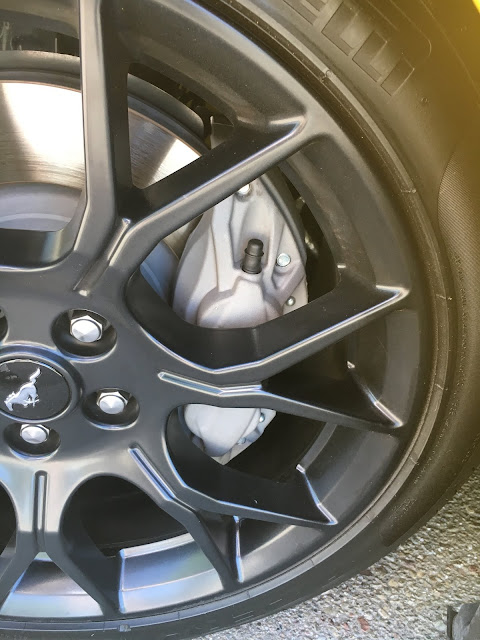 Tires, wheels & brakes of the EcoBoost

Ford has gone to the trouble and expense of using a four-wheel, independent suspension when they could have just used solid axles with no springs. Okay that’s a little harsh. But then so was the ride on either the EcoBoost or 5.0. I suppose that when you’re driving over 100 mph and the downforce becomes a factor the ride might smooth out. BUT I DON’T NORMALLY CRUISE AT 100 MPH!

It seems to me that ever since car magazines started testing g-force and lap times on race courses car makers have been building cars – road cars – to track specifications. (When I worked for an importer of note in Canada we were stunned to realize that cars for our market, you know with cold weather and snow, were equipped with tires spec’d out for a skid pad.)

Maybe, just maybe, the automakers should make these super-stiff suspensions an option? I mean what’s the point of an expensive IRS if it rides like there’s no suspension at all? And yes I know that with the Magne-Ride Suspension you can change the settings.

While I’m on this rant, you know we live and drive in the real world. Even here in sunny California many of our roads are falling apart. Maybe that’s one reason for the popularity of pickups and SUVs? When you drive a car like the 5.0 you either try to avoid all the bumps (intended or not), potholes, and cracks or your back and kidneys take a beating.

For anyone who needs more power there are even more powerful Mustangs. Like the GT350R. Or the upcoming ’19 Bullitt.

Each Mustang has its pluses. I would love to see an EcoBoost with over 400 hp and a manual transmission. I know the engine is more than capable of that much power. Maybe a somewhat de-contented version that cuts the weight but ups the power?

Fuel economy is not much of a concern for those who buy a Mustang but either version if (and that’s a huge if for the 5.0) driven sensibly can be relatively frugal. The EcoBoost is rated at 21-mpg city and 31-mpg highway, while the 5.0 is rated at 15 city and 25 highway. I actually saw 27 mpg on the highway from the 5.0. (Do you have any idea how much restraint it took to get that kind of economy?)

A word about the color of the 5.0. Ford calls it Orange Fury Metallic. Yeah it stands out. But it has history. It goes back to at least ’69 or ’70 when it was a color on some Boss 302 Trans-Am race cars. It’s not a color I’d choose but it has meaning. 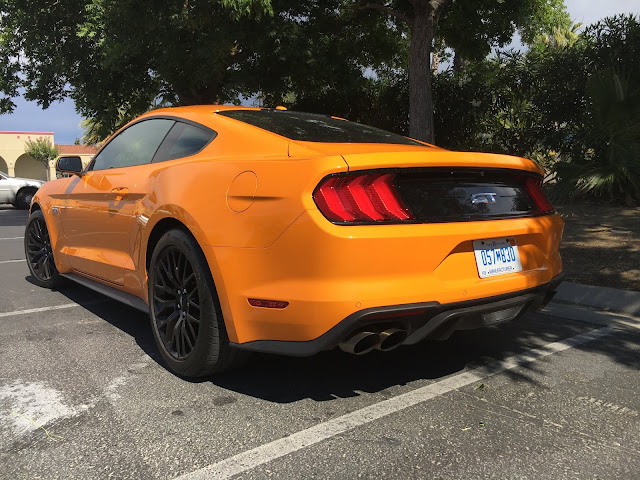 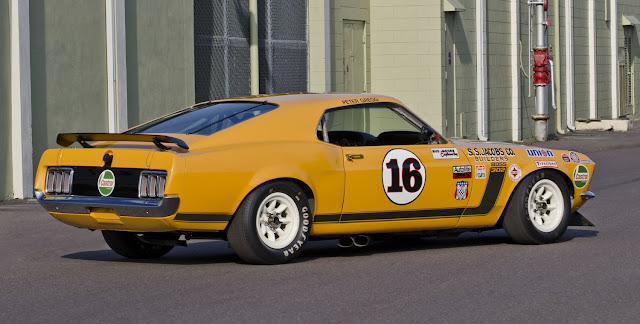