Last night I posted on the Spring Classic Showcasing Nitro Revival at WeatherTech Raceway Laguna Seca. This morning, after a good night's sleep, I'm feeling reflective. That's what "historic" race cars do for me. I haven't been to hundreds of races but probably more than some so seeing race cars that I saw 20-50 years ago brings back those times for me. I hope those cars give the younger folks an idea of what it was like "back in the day."

The Can-Am cars were running when I arrived at the track. Boy did that take me back. I only saw one Can-Am race in person - St. Jovite, Quebec in 1970. The track is Le Circuit Mont-Tremblant. It was a beautiful setting in the Laurentian Mountains, kind of in a bowl. When I arrived the cars practicing and sound of those big V8s echoing was awesome. Seeing and hearing the cars again brought back memories of a skinny kid in his beat-up VW Beetle looking in awe at his heroes. It was the last trip that old VW ever made

Watching the IMSA cars brought back more recent memories, if the 1990s are recent! I had a friend, Stan Ferrell, who worked for a couple of IMSA teams; he was their truck driver and a general crew member. Stan and I were really tight in our teens.

Stan's first team was an independent out of Florida. They ran a Camel Light car. The driver slapped the outside wall on Turn 11 onto the main straight. It wiped out the whole right side of the car. Evidently the owner wouldn't get the rental fee if the car didn't make the race. There was no money for a new body panel so the team manager set about cutting off all the damaged fiberglass and replacing the flat side with the thinnest plywood I've ever seen. They then covered it with white Mylar. I pitched in and got fiberglass bits in my eyes. But I loved it.

A couple of years later Stan landed a similar gig with Comptech and I hung out with him at what was then just Laguna Seca. I vividly remember seeing Phil Remington sitting in front of one of Gurney's Toyota GTP cars making a little winglet. I wish I had snapped a picture - an old master at work.

I watched the SCCA GT & IMSA RS race and watched that little Mazda RX-3 hold its own against the much more powerful Corvettes. I don't think I ever saw a RX-3 race before and it was so much better than reading about it in a magazine.

The final race that stirred me was the bikes. It was supposed to be "demonstration laps" meaning they weren't racing. They look real to me. I've drive the track in a car and it can be scary but on a bike!? I've only seen one bike race in person and that was at a basically flat race course - Shannonville - where I watched more than a few riders go down. Watching the historic bikes made me think of my friend and former co-worker Warren Milner who raced that day at Shannonville.

There was a small moment that got to me. One of the hot rods was being loaded onto its trailer in preparation for the long haul home. Although it had a modern(ish) engine it was a kind of ratty looking gasser, the kind of drag racer someone would build in their backyard. I circled the car looking at all the parts, taking a few pictures. Most of the guys around the car were my age (old) or older with the exception of one man maybe in his fifties and one in his twenties. One of the older guys, maybe the car owner, looked at me and mouthed "thank you". No sir thank you. That's how we did it way back - we built cars with what we had. This is that car - 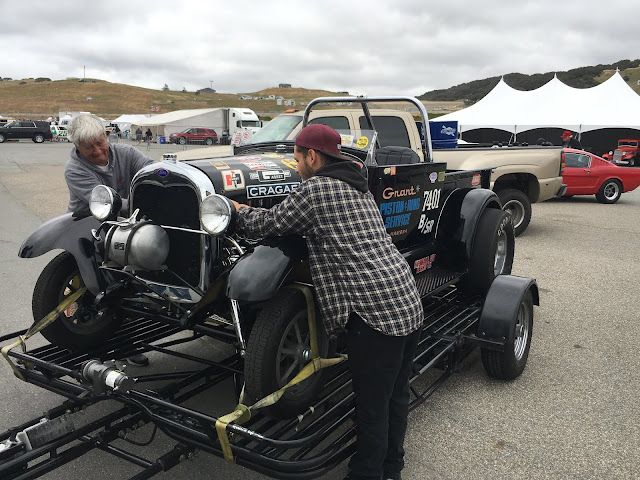 I haven't mentioned the people - drivers, owners, crew members, fans, etc - that I've met and who I remember. That's what historic racing does for me. I hope it gives younger fans a hint at what racing was all about.

There are many events at WeatherTech Raceway Laguna Seca. Check out the schedule at http://www.weathertechraceway.com/. It really is a world class venue situated in one of the most beautiful areas of this nation. Take your kids and show them there is so much more than autonomous driving.
Email Post