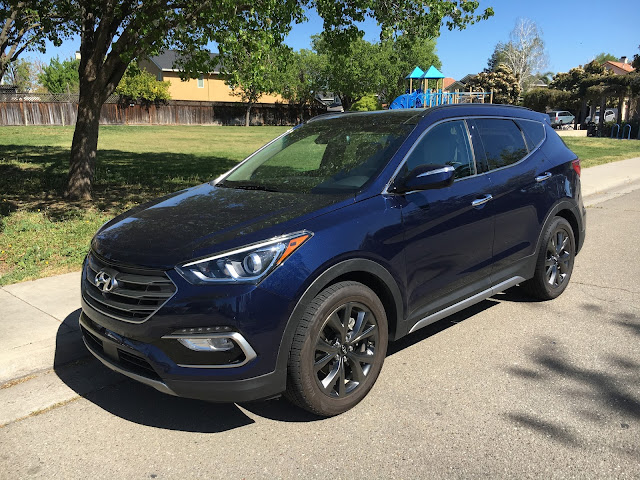 I drive a different car just about every week. I'm used to people asking, "What are you driving this week?" It's normal. For some reason though more people showed interest in the Santa Fe asking, "What do you think of it?" or "How's the Santa Fe?" My answer will come later in this article.

The small(ish) SUV market is crowded. Every major auto maker has something in this field. And really it is getting hard to tell them apart. I've driven a number of them and they all seem similar to me. The Santa Fe in some ways is just another small SUV. But that doesn't explain why so many people asked me about it.

The Santa Fe Sport 2.0T follows common practice for this genre - based off a front-wheel-drive passenger car, seating for five, and fuel efficient (relatively).

There are two engines available in the Santa Fe; a 2.4-liter 4-cylinder and a 2.0-liter turbocharged 4-cylinder. The bigger engine has less power and the fuel economy differs only slightly. The 2.0T puts out 240 hp and 260 lb-ft of torque. FWD is standard with AWD optional.

Given that the 2.0T ULT model tested weighs almost two tons (3,949 lbs) the performance and economy are very good. Zero to sixty has been reported at 7.6 seconds. Fuel economy is rated at 27-mpg highway and 20-mpg city.

Like so many vehicles today you can switch drive modes between "Eco", normal, and "Sport". Starting off in either Eco or normal the Santa Fe Sport 2.0T felt sluggish, like it was starting off in 2nd gear or there was too much turbo lag. It was much more responsive in Sport. I only wish the default was Sport.

If you're a regular reader of my reviews you know I do not like harsh suspensions or tires. The Santa Fe suffered from both but thanks to the Tire Pressure Monitoring System's readout on the instrument panel I realized that the tires were way over-inflated. I deflated them down to the recommended 34 psi and the ride was much better. But tire pressure wasn't the problem with speed bumps - the Santa Fe Sport was just too harsh. I don't believe you should have to come to a dead crawl to go over a speed bump. I mean slow down for sure but c'mon.

Like all SUVs/Crossovers utility is the word. Although most are used mainly for people there is a ton of cargo room - behind the rear seats there is 35.4 cubic feet, and if the rear seat folded there is 71.5 cubic feet. I really wish car companies would state the length, width, and height dimensions of the cargo area because that's is what is important. And of course I always forget to get out my tape measure.

You know it's been a long time since you've bought a new car when every single car out there seems expensive. The test Santa Fe Sport 2.0T ULT listed for $38,325 including $1,725 in options and $950 freight and handling.

So let me answer the question asked at the start of this article. The Santa Fe Sport 2.0T ULT is on par with many in its class and better than some. It has "America's Best Warranty" according to Hyundai. It was a comfortable vehicle, the interior was generally well laid out, and it had all the amenities I could want. I'd have no fears buying one. Maybe its biggest negative is that it doesn't really stand out in a very crowded field. But then none of them do; if you were to park all the different SUVs of this general size next to each other, all in the same color, and removed the names, how many could you pick out? 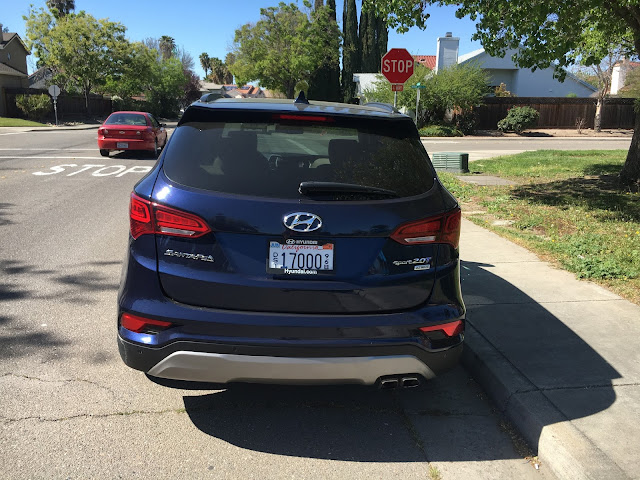