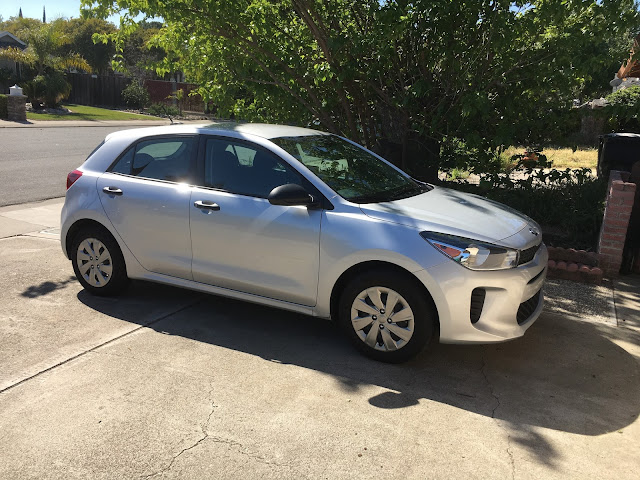 I have to hand it to Kia. Not many car companies provide a base model for review. Most cars I get (and I assume all reviewers) are pretty well loaded. But not the Kia Rio LX with its roll-up windows and manually adjustable side mirrors.

What really blew me away about the Rio was the fuel economy. The EPA reports that it is capable of 28-mpg around town and 37-mpg on the highway. I exceeded the highway figure by a huge margin; on a short trip from Livermore back home, a distance of 24 miles up and over the Altamont Pass, the Rio returned 47-mpg! And I tried to maintain a speed on the highway of about 70 mph. To say I was gobsmacked would be an understatement.

Now I know what you're thinking, "Who wants to drive an underpowered, tiny, econo-box on the highway?" Let me assure you the Rio felt neither underpowered or tiny. Stated 0-60 times are around 9 seconds, not blazing fast but decent. And my 5' 11" hefty body did not feel cramped in the driver's seat. Yes knee/leg room for the rear seat is minimal if the front seats are all the way rearward but a little compromise on the part of those up front should make it acceptable. 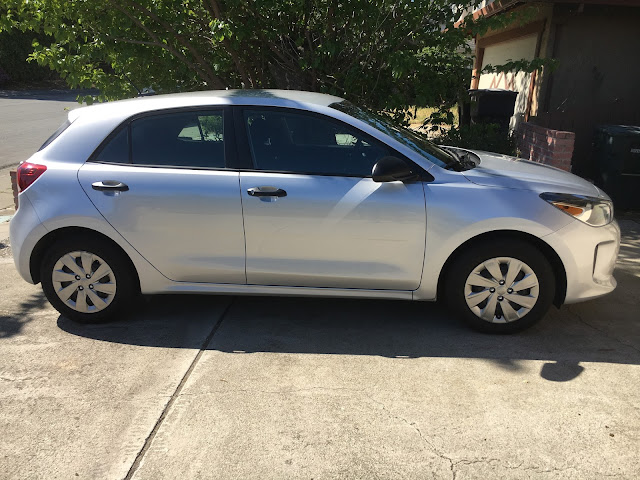 The Rio LX I drove was a 5-door, or a 4-door hatchback. It is powered by a 1,591 cc (1.6-liter), DOHC, 4-cylinder that puts out 130 hp and 119 lb-ft of torque. Either a 6-speed manual or automatic is available; the test car had the automatic and as much as I like to shift for myself I have to admit that the automatic makes more sense for most driving. The Rio is front-wheel-drive.

I like hatchbacks, especially 4-door hatches. They are kind of like a station wagon. They offer the option of seating or large storage space. With the rear seats in use there is 13.7 cubic feet of storage. Fold the seats down and that expands to 32.8 cubic feet.

Unlike economy cars of old the Rio LX has real tires not the "rim protectors" (as a colleague in Canada named the puny tires that used to be on base models). The tires are P185/65R15 in size.

The brakes were disc on the front and drum on the rear (the top of the line EX has disc front and rear). The front rotors are 11" in diameter. I would prefer four-wheel disc brakes but you take what's available.

There are three Rio versions; the base LX, a S, and an EX. They all have the same engine/transmissions so the fuel economy should be the same. Even though I'd prefer four-wheel disc brakes I'd probably opt for the S model. It ups the content some without jacking the cost up too much.

Total price minus tax but including freight and handling came to $16,315. A similar equipped S would be about a grand more.

If you commute and you're on a budget (or just budget conscious) a Kia Rio should be on your list of cars to look at. 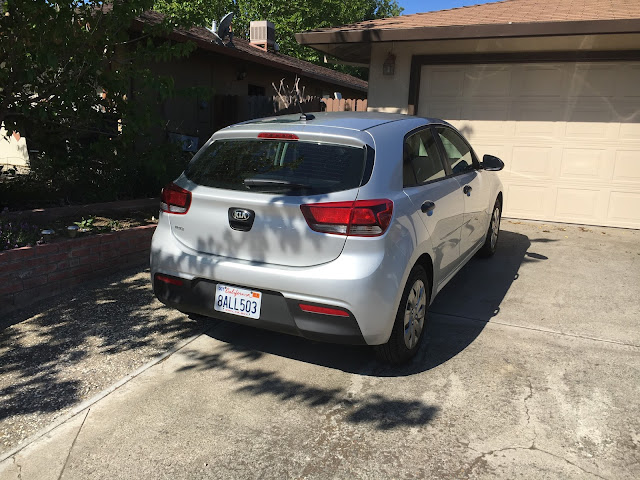