I've been told you can't really compare these three trucks, and that's correct. They are as different as night and day. So I decided to do it anyway.

This isn't a complete review of any of the three; those may appear in the Tracy Press. This is my impression of three kind of similar trucks.

All three are 4X4s. All three have four doors. I have no use for 4X4s - it doesn't snow where I live and I don't go off-road. I do like pickups with four doors because they allow you to seat up to five people and carry a load.

I'll start with the Raptor because Ford comes first alphabetically (Dodge would but now it's Ram). 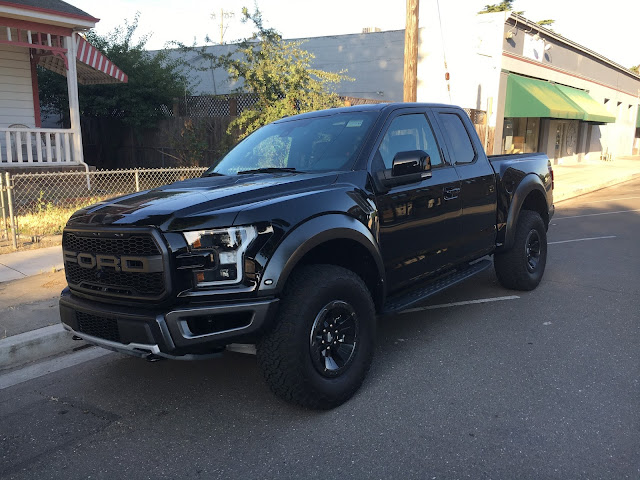 The Raptor has a massive stance and looks mean in black.

In the world of off-the-shelf, off-road 4X4s the Raptor may rule supreme. Ford believes so and I can’t dispute it.

My first impression of the Raptor was “dang that’s big!” And it is.

When originally introduced as a 2010 model the Raptor came with two different displacement V8s; a 5.4-liter and 6.2-liter. In 2015 the 6.2-liter, was dropped in favor of the 3.5-liter EcoBoost V6. Now the EcoBoost, in all its 450 hp and 510 lb ft of torque glory (considerably more than the 6.2 V8) is the only engine. Magazines say it can cover the quarter-mile in just over 14 seconds. 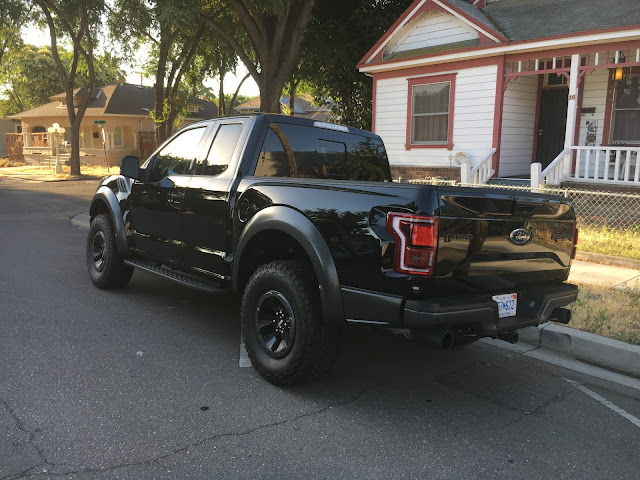 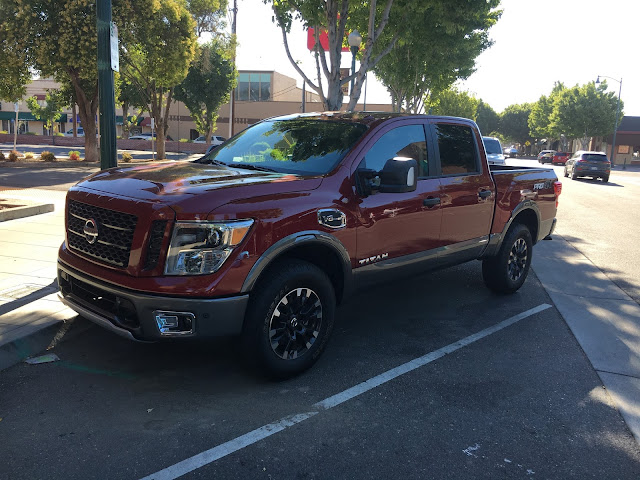 Compare the front-end of the Titan to a standard F-150 or Silverado.

The Titan's been around for a few years now. Nissan has redesigned it and in my opinion (and others) it kind of looks like some of the competition.

Nissan went the traditional route for power (except for the XD that uses a Cummings 5.0-liter V8 diesel) and installs a 5.6-liter V8 under the hood - 390 hp and 394 lb-ft of torque sent through a 7-speed automatic.

The Titan is a thoroughly modern pickup with all the conveniences. The interior might have been the best of the three, but only by a nose.

The suspension and steering just weren't up to par in my view. The steering, despite being a rack and pinion, felt like it was a rather loose old style box with center link, idler arm and pitman arm. There was a secondary shudder that went through the steering from bumps that I didn't expect. 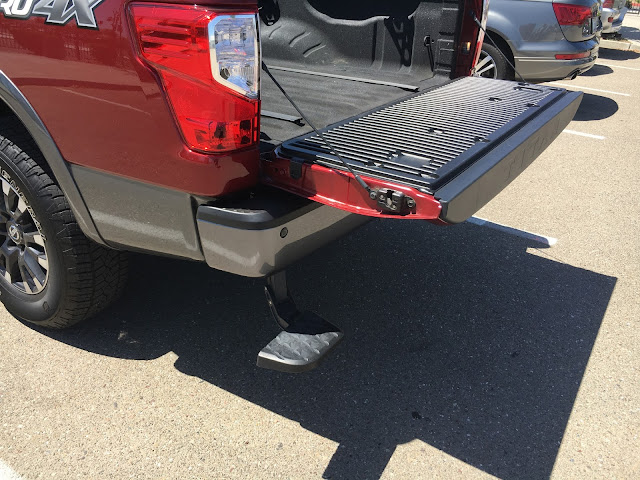 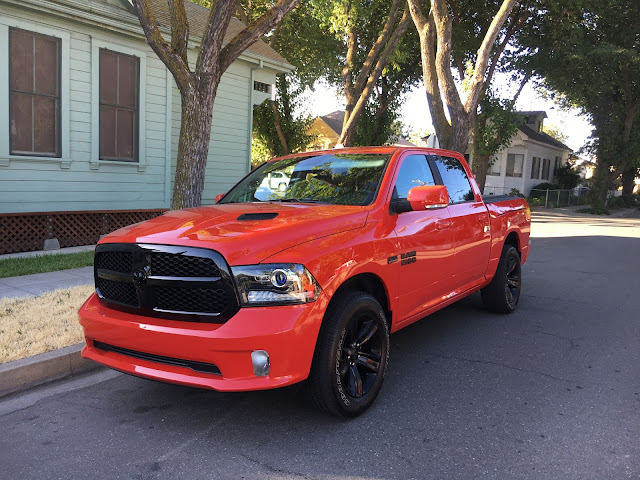 Ram's (I keep wanting to say Dodge; old habits die hard) Night Edition grew on me. When Dodge first came out with its "new style" Ram in '93 (as a '94 model) I wasn't a big fan. To me the front end looked too massive. I like the current Ram because of its distinctiveness.

Ram uses its 5.7-liter Hemi V8 to power the Night Edition. It makes 395 hp and 410 lb-ft of torque. That's more than ample for most people. Ram uses the corporate 8-speed TorgueFlite automatic. Then they install a rumbly exhaust to let everyone know it's got a Hemi. Nice - just what a V8 should sound like. 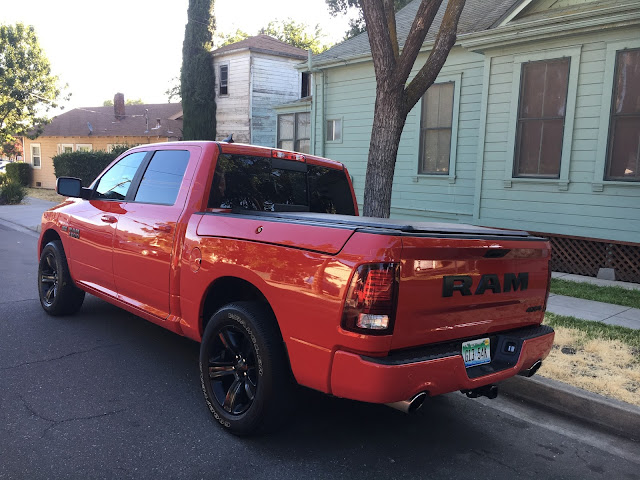 And the rumbly exhaust comes out here.

I flat out love the built-in locking tool boxes in the box sides. I used them to haul my groceries and it worked just fine. (I thought about filling one with beer and ice.) 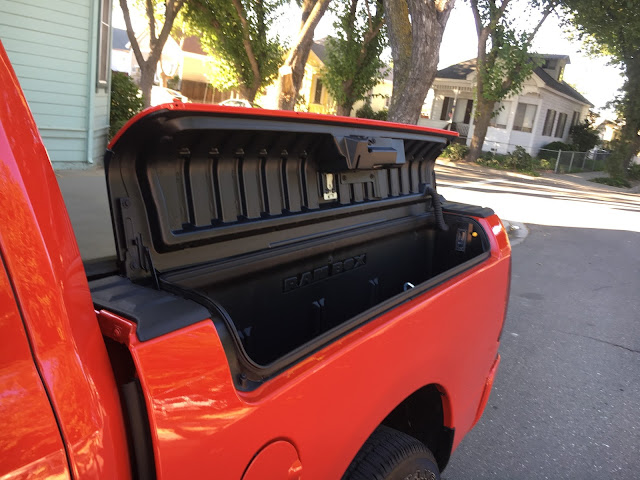 I wasn't sure about the bed cover - it looked good and I suppose it helped fuel economy but if I routinely carried stuff in the bed it would get in the way. (It is removeable but then you have to stow it somewhere.)

Who's the Winner?
I don't have all the sophisticated equipment the big magazines have so you won't see any documented acceleration times, stopping distances, or skid pad numbers. All I have is my opinion and the seat of my pants.

It's no surprise that the Raptor has the best ride. It really does have a super suspension. I'm sure that's a big part of the cost of a Raptor. The Raptor has a very specific market - the more hard core off-roader who doesn't want to build his own.

But the Raptor is only available as a 4WD and as I've said I have no use for 4WD. Both the Ram Night Edition and the Titan are available in 2WD.

As nice as the Titan is I just find it to derivative of other trucks.

So I have to go with the Ram. It looks different. With the V8 it sounds so sweet. I wouldn't go with the Red; I guess I'd have to choose black because there is no blue for the Night Edition (l like blue!).

The one thing that amazed me with all three was the fuel economy. Every single one of them returned over 18 mpg on the highway at about 70 mph. One, the Titan topped 19 mpg.

These are not work trucks, they're too nice. These are trucks for the person who wants a truck but needs space for passengers.

So Scott, I did compare the three. I think it came out okay, don't you?