I am not a candidate for an electric car. Don't get me wrong - I love the idea of green tech and of never having to wait in a Costco gas line again. It's just that the best range and the fastest recharging rate still do not work for me. Maybe if I was commuting back and forth to work again an electric would work. But I'd still need another vehicle for trips and I really can't afford two new cars.

But these reasons do not negate my enthusiasm for today's electrics. 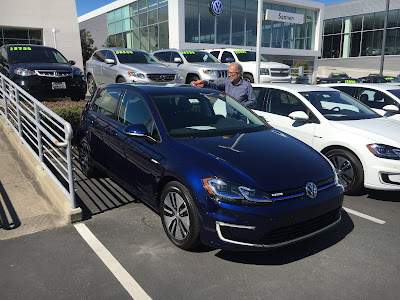 VW has spruced up the e-Golf for 2017 making it more exciting looking (and I love the Atlantic Blue).

Yesterday I got to drive a 2017 e-Golf. And it was, well it was just like driving a car. More or less.

Volkswagen invited a few area writers to drive from Sonnen VW in San Rafael to The Ritz-Carlton in Half Moon Bay, where we had lunch and conversation, and back; a distance of about 45 miles each way. A fellow writer, musician and green car aficionado Steve Schaefer drove to The Ritz. He fiddled with the settings (there's a "normal" and different energy saving profiles) while I navigated.

We had a nice lunch, interesting conversations with the other writers, and then I drove back to San Rafael. But before I tell you how well (or poorly) we fared how about some specs?

There is currently an e-Golf on sale - it's a 2016. It looks just like any other 4-door Golf except for the "e" designation and the lack of a tailpipe. The '16 has a range of up to 83 miles on a full charge. That is the most pertinent spec as far as I'm concerned. Eight-three miles was just enough to get me back and forth to work before I retired. For the SF Bay Area's "mega-commuters" (those who drive 50 miles or more one way to work) a recharge station would be needed at work.

I'm no electric nerd so I don't really care about most of the other specs but for those of you who do care here they are:
- The electric motor is upgraded from 85 kW & 115 hp ('16) to 100 kW & 134 hp ('17). Torque is up from 199 ft-lb to 214.
-There will be three trim levels, an SE, SEL Premium and a Limited Edition.
-There are all those nifty graphics to tell you how little energy your car is using.
- There is an available "fast charger" that allows the batteries to reach 80% charge within an hour at Fast Charging Stations. Normal charge rate @ 240 volts is less than six hours. 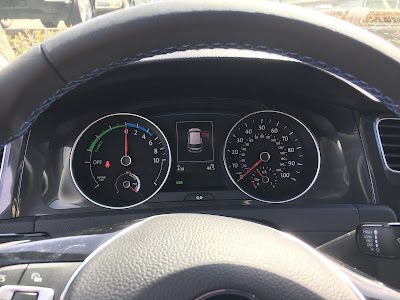 Instead of a tachometer you get a usage gauge - to the left into the green is regen; to the right usage. 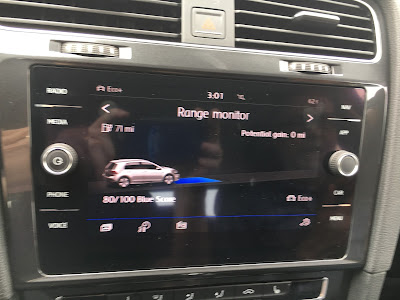 When Steve drove he mostly used the "B" setting. B provides automatic regeneration - take your foot off the accelerator pedal and the car slows down rapidly, regenerating power to the battery pack. When I drove back I used B and Eco Plus. Overall I think we did fairly well for the 90 mile round trip. We started with a full charge (125 mile range) and when we got back the readout said we had 50 miles of range left.

I wouldn't recommend the Eco Plus setting for anyone except the most hard core energy savers. Acceleration is very leisurely, the A/C isn't and the top speed seemed to be limited to 60 mph. I think the best bet is to always use the B profile and otherwise drive normally.

Probably the biggest two differences most people will notice between a gas-engine Golf and an e-Golf is the absence of noise in the e-Golf and its extra (430 lbs +/-) weight. Driving it is just like driving any Golf. And that's a good thing.

I haven't mentioned energy rebates because they change. Check your area to see what is available.

If an electric vehicle suits your needs the 2017 e-Golf might be the car for you. VW hopes to have them on dealer lots by the end of this summer. 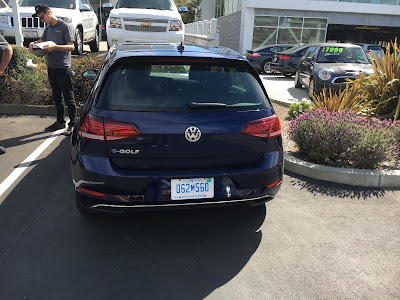 A little hard to see here but below the thin chrome strip at the corners are two faux exhaust outlets.