I attended a dinner last night at the Basque Cultural Center in South San Francisco (great food) to celebrate one of the great race tracks in the world, Mazda Raceway Laguna Seca, formerly known as just Laguna Seca. It was also a celebration of the recent three-year management contract given to the creators of Laguna Seca, SCRAMP (Sports Car Racing Association of Monterey Peninsula).

In case you didn't know the past few years have been very chaotic for SCRAMP. For whatever reason (reports vary) the Monterey County Board of Supervisors, which owns the land the track is on, decided they weren't happy with the arrangement with SCRAMP. (For more background dig through the Monterey Herald's archives.) It looked for awhile like SCRAMP would lose their contract. But for at least the next three years they have a reprieve. Fingers crossed that things will settle down for much longer.

Way back in 1957 a group of sports car "nuts" decided the Monterey Peninsula needed a permanent road course. From 1950 through 1956 sports cars raced through the Del Monte Forest in Pebble Beach. The race ended when the course, on public roads, was deemed too dangerous. The genesis for Laguna Seca came from the Pebble Beach Road Race. The first race at Laguna Seca was held on November 9, 1957. 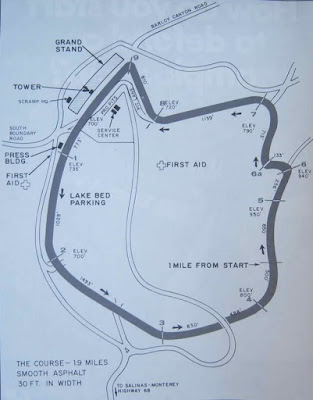 My first trip to Laguna Seca was in 1990 for the Historics. I had flown to California from Toronto for a job interview and a friend suggested we go see the races. I've been to a number of races since including all but two Monterey Motorsports Reunions (the new "historics"). My media group, Western Automotive Journalists (WAJ) have held their Media Days there for years. I actually was a volunteer crew member on an IMSA GT Light team in the mid-90s.

As a kid growing up on the East Coast, Laguna was just a fantasy. By the time I first visited I had been to a few tracks - Lime Rock, Mid-Ohio, Watkins Glen, Waterford Hills, St. Jovite, and Mosport. No matter how many pictures you've seen of Laguna it takes the real thing to bring the place into perspective. The first thing that hit me was how dry the place was; let's face it East Coast tracks are green, park-like places. I'd been to Riverside before it closed but that was in the desert.

What I wasn't prepared for was seeing so many of my boyhood idols in the flesh. Racers whom I had only read about.

Since my first trip I've driven Mazda Raceway Laguna Seca (MRLS) a few times during WAJ's Media Days. I've done the Walter Mitty thing even if in reality it was more like a Sunday cruise. It gave me more respect for the real race drivers and for what a demanding track MRLS is. 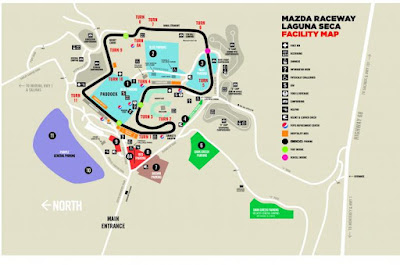 It was said at the dinner that most race tracks do not make money. I'll take that at face value. Certainly many, many tracks have disappeared over the years. Some, like Riverside, to make way for other development and others simply because they were a money pit. The answer to "How do you make a small fortune in racing?" is to start with a large fortune. The same I suspect holds true for a race track.

MRLS has additional barriers to even breaking even. For a long time the track has been limited to five major events per year. (They do rent the track at other times to clubs, race teams, car companies, etc.) If one event doesn't pay off for whatever reason (weather, fickle fans) there is a large hole in the proposed yearly budget.

Under the new contract MRLS can now hold seven events. Two more events to either make money or not.

Another barrier, one that many tracks face, is noise restrictions. When Laguna was built it was almost in the middle of nowhere. The land was part of Ford Ord. There was little to no development along Highway 68. Noise was not a problem. But things have changed. And even though those who built houses and those that bought them knew there was a race track nearby they now complain about the noise, just like so many complain about airports that have existed for years. (I once lived near three railroad level crossings - I can tell you about noise.) I'd like to remind those who complain about the noise that the noise is the sound of money.

Money? I thought you said the track is lucky to break even Bruce? The money comes not from the track but from the people who go to the track. A large proportion of race goers leave behind a lot of money on the Monterey Peninsula; a lot of money. As in hundreds of millions.

Tourism is a double edged sword. It brings in much needed money but it also brings in - gasp - tourists! Tourists who clog the roads. I have friends who live on the Peninsula and they always complain about the traffic; heck I complain about the traffic. But without the people who cause all that traffic there would be far fewer jobs on the Peninsula.

I'm not bright enough to have answers to all the problems but I know there are answers even if there is no perfect solution. I believe the County Board of Supervisors ultimately wants more money from MRLS but maybe there isn't any money to be directly had from the track. That doesn't mean there isn't money to be had. The revenue from all those tourists is a huge benefit. Maybe there is a way the county could increase their share of the taxes the tourists pay? I know many cities levy a Transient Occupancy Tax on hotel rooms. Is it possible for a county to do the same?

Whatever happens I hope that Mazda Raceway Laguna Seca can be separated from the politics. The County Board of Supervisors is an elected board and it will change. It could change for the better or worse. That hurts long-term planning. Politics - must it always come down to politics?

I urge everyone who cares about auto racing, not just those who reside in Monterey County or California but world-wide, to tell the Monterey County Board of Supervisors what Mazda Raceway Laguna Seca means to you. Let them know how much money you spend in Monterey County because of the track. I know that when I go for The Week in August spend somewhere between $200-$500 and I stay with a friend, as a journalist get passes to events, and get feted (sometimes) by car companies.