I had lunch at the Silicon Valley Auto Show a couple of weeks ago with some folks from Mazda Motorsports and Mazda Raceway. Well not just me but a few other writers as well.

Mazda is huge in racing. As they say, on any given weekend more Mazdas are being road raced than any other brand. Mazda is the single biggest name in grass roots racing - you know the racing nobody goes to watch. And it's a pity that so few actually see some of the best, closest racing ever. Have you ever been to an SCCA race weekend? If not go. You will probably see as many Mazdas as are on the lot at your local dealer - and most of them will be MX-5s (Miatas). And if you look in the engine bay of other race cars you just might see a Mazda engine. In fact Mazda has a 55% share of all SCCA club racing entries.

One of the reasons you see so many Mazdas and Mazda powered racers is that Mazda provides a lot of contingency money; over $1,000,000 in 2016. That's a ton of green. Another reason, especially for the MX-5, is that it is a great race car whether in the Global MX-5 Cup (Spec Miata) or in specific SCCA and NASA classes. 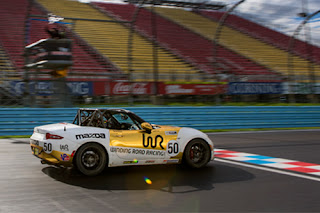 A Global MX-5 Cup car costs just $58,900. That is a an incredibly low price for a ready to race car. I've been a fan of spec car racing since I worked for Honda Canada back in 1989. In spec racing all the cars are as equal as can be. I asked a MX-5 Cup driver about cheating and he said it was virtually impossible, that Mazda Motorsports makes sure of that. If you want to watch some close, and great racing, take in a Global MX-5 Cup race. And if you think you're a hot shoe plunk down some bucks and buy your own race car. Mazda Motorsports has sold over 3,000 Spec Miata kits to date.

The Global MX-5 Cup is not the only spec series Mazda participates in, there is also the Formula Car Challenge presented by Goodyear. These are spec formula cars (open wheel) powered by Mazda engines. This is a stepping stone for racers who may graduate to endurance racing, IMSA, etc. 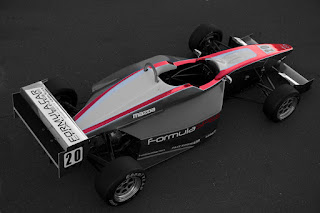 Being from Northern California I can't talk about Mazda without mentioning Mazda Raceway (formerly Laguna Seca). I've been going to the track since 1990. Many of the improvements you see today are a direct result of Mazda's involvement. Despite all the controversy that has been swirling around the track over the past year or so Mazda Raceway lives on. I believe that no matter who ends up in the driver's seat Mazda Raceway is too important, not only to Monterey County but to the world to fade away. I was heartened to hear that Mazda Raceway is on track for another great year.

So a couple thoughts. Get out and watch some of the greatest racing you'll ever see - Go see some spec races. I'm sure Mazda would love you to buy one of their cars but they'll welcome you regardless of what you drive. And patronize one of the world's most renowned race tracks, Mazda Raceway.