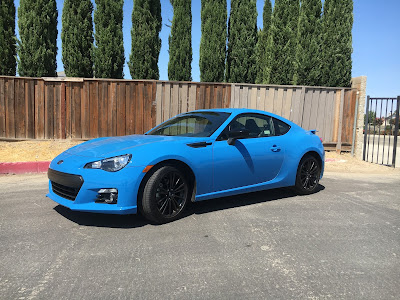 Subaru. What does Subaru conjure up for you? For me it’s the WRX STI; for others it might be the Forester or Outback.  And for others it is the BRZ.

What is the BRZ? It is Subaru’s sports car. Those in the know also know it as Scion’s FRS. “They” say it was jointly developed but both cars seem more Subaru to me.

Nominally the BRZ is a 2+2, two seats up front and two in the rear. If you want to give a ride to someone you truly despise the back seat of a BRZ is the place to stuff them. Think of it more as a parcel shelf with seat belts than an actual seat. You might be able to get two kids back there but they better not be claustrophobic.

The front seats, both racing style bucket seats, were pretty comfortable. I’m not as limber as I used to be so getting in and out (the seats are way down there) was not a dignified procedure for me. My wife on the other hand had no problem.

This is a sports car, make no mistake about it. It’s meant to be driven. The main gauge in the instrument cluster is the tachometer. The speedometer is much smaller. So small in fact that Subaru has a digital speedo in the tach’s face. I learned to rely on the digital speedo because my old eyes had trouble reading the analog one. 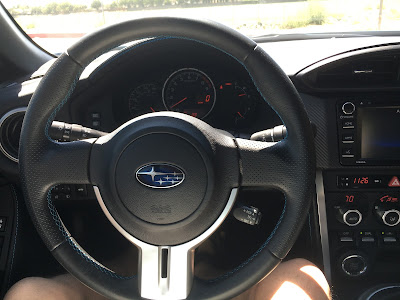 Unlike every other Subaru the BRZ is a front-engine, rear-wheel-drive vehicle. Subaru has made their name synonymous with All-Wheel-Drive so it seems like a huge leap to go to just driving the rear wheels. But this is a sports car so live with it.

The engine is Subaru’s 2.0-liter, DOHC, 200 hp, 4-cylinder boxer engine. Considering the STI’s engine makes 105 hp more you might ask why this engine wasn’t used. I know there are some folks out there that have converted their BRZ to STI status and they are fast. I don’t know why Subaru decided to stick with a non-turbo engine but I can guess. Price would be one reason. Insurance might be another. Car magazines put the BRZ’s 0-60 mph times in the mid-to-high six seconds.

The BRZ is quick. Part of that is gearing – the final drive is 4.100 and only 6th gear is an overdrive. But the engine is plenty of oomph. At lower rpms, say under 4,000, the engine feels and sounds like a typical Subie engine – harsh. But once you get into that sweet spot right on up to redline (7,000 rpm) it is singing.

The test car had a 6-speed manual transmission. I’d call it a close ratio tranny because when you wind out the engine in a gear the engine speed doesn’t drop drastically in the next gear. The transmission lets you keep the engine “on the cam” as we used to say. There is a 6-speed automatic transmission available as well.

The transmission was a little notchy, especially on the first to second shift, when it was cold, and it was never that cold when I had the BRZ. And the stiff final drive made the BRZ a little buzzy at highway speeds. In fact the car was noisy. But it is a sports car not a Grand Touring car. It didn’t bother me. I’m sure there is less noise insulation in the BRZ to save weight.

Speaking of weight the BRZ hits the scales at no more than 2,874 lbs. That’s a lightweight.

For once I didn’t mind the harsh ride of low profile tires. A car like the BRZ is what tires like the 215/45R17s are meant for. No all-season b.s. here; these are summer performance tires.

The BRZ is all about the driving. It doesn’t have a ton of trunk room, just enough for a weekend. It isn’t the most economical car out there. It’s rated at 30 mpg on the highway and 22 in the city but I doubt most owners will see that, it’s just too tempting to press down on the accelerator just a little more.

I’m not a race driver and I didn’t drive the BRZ like I was on a track. But in my so-so hands it felt balanced, not like your traditional front-engine, rear-wheel-drive under steering behemoth. In NASCAR speak it didn’t push. There were a couple of times when cornering it felt like I could have nudged the rear out a bit but I was on public roads with traffic so I restrained myself.

The BRZ is decently priced. The base BRZ lists at $25,395. The test car, a BRZ Series.HyperBlue/GZS goes for $27,690. Destination and delivery is $795. Yes the test car had extras but you get the same engine with any BRZ.

I like the BRZ. For me it couldn’t be an only car, I often need a car that comfortably holds more than two people. But if I had a fleet of cars, or I was younger, I’d seriously consider a BRZ. Especially in light of Subaru’s reputation for reliability and longevity. 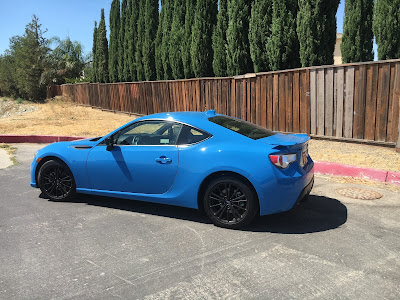