Jaguar Shows Off the F-Pace and XE at Cole European 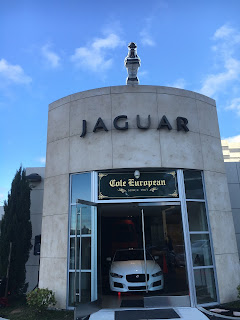 The other night I, along with dozens of up-scale clients (and a few other poor writers like myself) got treated to a "New Generation of Jaguar" consumer VIP event for the new Jaguar XE compact sports sedan and F-Pace performance SUV at Cole European in Walnut Creek. Cole European has been in business since 1963. 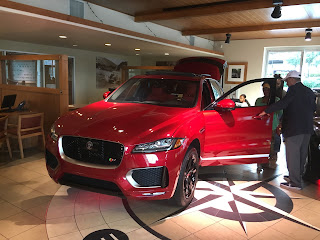 I'm not a big SUV fan regardless of performance. But I fully understand Jaguar's reason for getting into the market. SUVs are everywhere; on a recent vacation in Hawai'i (Maui and O'ahu) the number of SUVs astounded me. Who needs all-wheel-drive in Paradise?

I kept trying to think of the F-Pace as a tall wagon but it didn't work. I still saw an SUV. A darn good-looking SUV but an SUV no less.

What sets the F-Pace apart from the pack, at least for me, is the inclusion of a diesel engine. The 2.0-liter 4-cylinder diesel puts out 180 hp and an amazing 318 lb-ft of torque. The 0-60 time is 8.2 seconds. Fuel economy has yet to be announced. 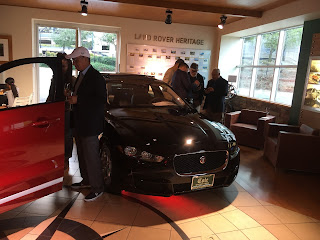 The XE is Jag's compact sports sedan. It is similar in size to the Lexus IS series. Like the F-Pace there are two engines and one is a diesel, the same 2.0-liter diesel. The other one is a turbocharged 2.0-liter, 16 valve four-cylinder that produces 240 hp. It will hit 60 mph in 6.5 seconds. No fuel consumption figures have been announced yet. All-wheel-drive is available with the diesel. An eight-speed automatic is the only available transmission.

The rear-wheel-drive V6 XE has a starting price of $34,900; the AWD diesel is $38,900. Given that the average transaction price of an entry level luxury car is around $40,000 the new offerings from Jaguar should sell well.

Obviously I can't give you any driving impressions - this was a static display. Most of the people present were either current Jaguar owners or prospective ones. I would say the F-Pace garnered the most attention. I prefer the XE though (just my anti-SUV bias). Now if they were to make a XE Shooting Brake (station wagon) ... 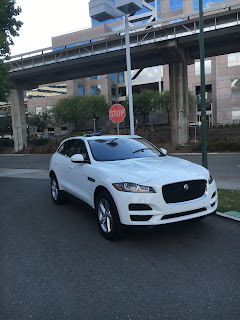 Now what would a new car VIP event be without food? There was a food truck outside; shrimp, crab, sushi, fresh oysters and some wonderful bacon wrapped shrimp inside. A wine and beer bar and an ice cream bar. Life is tough. The food, except for the food truck, was catered by Scott's Seafood Restaurant of Walnut Creek. 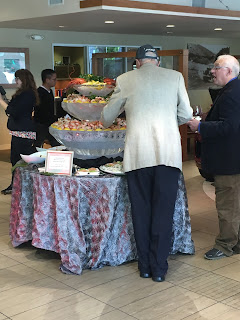 I have to give a big THANK-YOU to Jaguar for inviting me. Jaguar has had a very up and down history. It seems to be on very solid footing now and I'm glad. When I was writing for the Pacifica Tribune I didn't receive too many Jags. I did get a XJ. An older man I knew had lusted after a Jag his whole life. He quizzed me on the XJ wanting to know how it drove, what equipment it had etc. He wanted to know if it had "all the bells and whistles." He wasn't a wealthy man but I guess he was okay. After my article came out and his quizzing me he went out and bought an XJ. He said he couldn't afford the Vanden Plas but he was really chuffed to have his Jag. I think there are many people who view a Jag as their dream car. Don't let the dream pass you by.

You can check out all the Jaguar models at www.jaguarusa.com