DeltaWing - How Fast Can it Run?

Had dinner the other night with Don Panoz. Yes that Don Panoz. Not that I actually had dinner with him but he was one of the guest speakers at a Western Automotive Journalists dinner I attended. Katherine Legge, the driver of Dr. Panoz's DeltaWing race car was the other speaker. She is an excellent driver; at the age of 35 she has been racing for over 15 years. She has successfully raced in some of the toughest series.

Those unfamiliar with the DeltaWing racecar might recognize it from this picture: 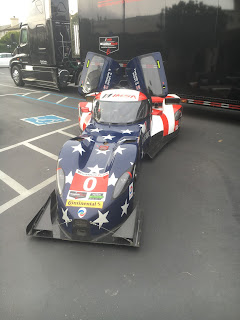 Now I don't agree with everything Panoz said or believes (I have to think he believes what he says) but you have to take the man seriously, he is a self-made man (invented the nicotine patch) and he has been extremely successful in automobile racing, a sport he did not come to until an age when many are retiring. He said something during his talk that highlights what drives him - people telling him he can't do something. So he does it.

Besides the race car Dr. Panoz (not alone of course) is working on a DeltaWing road car, or rather a couple of variants - internal combustion and electric. 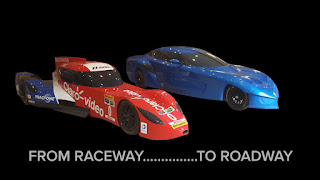 Now my interest in the DeltaWing is more with the race car. I thought if it will hit 200 mph with 350 hp how fast would it go with say 1,400 hp? I was thinking of the BMW F1 2.0-liter turbo engine that made a reputed 1,400 hp in qualifying set up. Could the DeltaWing set a new world record for a piston engine powered, wheel driven car with that engine?

I may never see that because it isn't the direction Panoz is going. That's okay. His belief in himself and his visions was inspirational, especially to us geezers. If he can do all these things at 81 years of age there is no excuse for us younger geezers.
Email Post