Spec Racing the Mazda Way - So Much Fun

Overcast, chilly and breezy; that can be normal for Mazda Raceway Laguna Seca in Monterey especially in the spring time. But the Battery Tender Global Mazda MX-5 Cup race presented by BF Goodrich warmed things up. 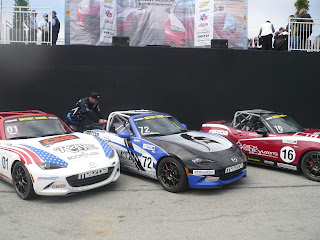 Take forty mechanically identical Mazda Miatas and put them all on one of the world's great tracks and you will have one hell of a race. There was close racing, rubbing, bumping, and off-roading (not by design) for forty minutes in the first MX-5 race of the year and the first for the all new 2016 Miata. There will be another race tomorrow, April 30, 2016. 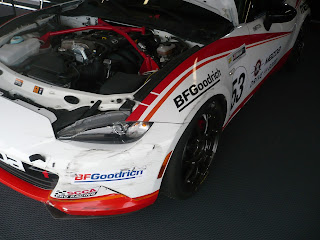 But first a little info on the cars, the 2016 Mazda MX-5 Miata Cup cars. They come as a turn-key racer for $53,000. Now at first blush that may seem like a lot of money, about $30,000 more than a stock 2016 Miata, but for a race car it is affordable. Mazda pares the weight down to around 2,100 lbs. from about 2,300. A driver's weight of 220 lbs. is factored in bringing the total weight up to 2,320 lbs. Ballast is added to make sure all cars weigh the same. The engines, ECUs, transmissions and differentials are tamper sealed. There's a full roll cage for safety and grooved rotors to dissipate the brake heat. The engine remains basically stock (155 hp) but with the reduced weight it is quick. Tires are BF Goodrich g-Force tires (slicks or rain). There is a custom exhaust header; although there is a muffler there is still a nice exhaust note. 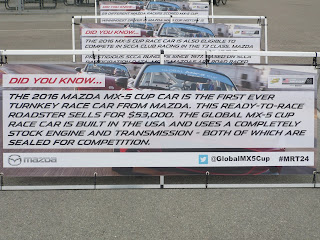 A lot of people will watch a race like the Battery Tender Global Mazda MX-5 Cup and think, "I could do that." They'd be wrong. Anyone who has ever raced will tell you it isn't as easy as it looks. I haven't raced but I have driven at Mazda Raceway Laguna Seca. Out of a field of forty I'd probably qualify fiftieth and I'm here to tell you it isn't easy. This track is demanding and the first time you crest the hill and start down the Corkscrew you're likely to soil your pants. The track literally falls out from beneath you. You can't see the track and to set your car up for the first turn of the Corkscrew you aim left off track at a tree. I've driven the track in street cars dozens of times and the pucker factor has lessened but not by much. Now imagine doing this over and over again at speed with other race cars all around you.

Racing a spec car like the '16 Maita helps a driver hone his/her craft. One of the secrets to doing well is the same as it is in any race - consistency. In the race more than a few drivers lost places because they went off line and lost precious seconds. In a race of equal cars it's hard to make up lost time.

John Gallagher won the race, followed by John Dean II (2nd) and Nikko Reger (3rd). Reger was later disqualified because his car was underweight. Robby Foley who was 4th was moved up to 3rd. Gareth Nixon won the Battery Tender Hard Charger Award - he started dead last and finished 17th. 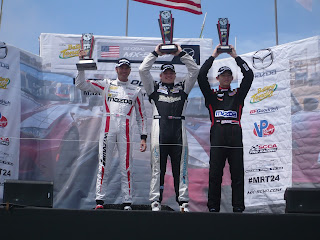 A huge shout out to Mazda. Mazda has almost single handed reinvigorated grass roots racing with the Miata. Single spec racing or SCCA you will see more Miatas than any other model.

It was an exciting race at a great track. The whole weekend should be great. Due to a scheduling conflict (work) I couldn't be there all weekend. But there's still time for you to get there. Besides the next Battery Tender Global Mazda MX-5 Cup race, there will be a Porsche GT3 Cup Challenge USA by Yokohama, Continental Tire SportsCar Challenge, Lamborghini BlancPain Super Trofeo, and the Continental Monterey Grand Prix Powered by Mazda race for WeatherTech SportsCar Championship.
Email Post