No not a Chevy. I was a Ford guy. I had a thing for '56 Fords probably because dad bought a '56 Ranch Wagon 2 door brand new. (When I say he bought it that really means he put the down payment on it and ordered it; mom actually paid for it.) 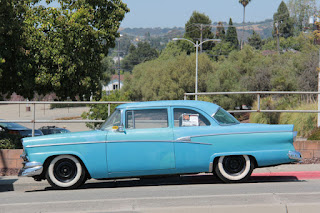 Some time before we moved from Wall Street to Avery Shores I bought a '56 Ford Mainline Tudor. It almost looked like a police car - it was black with a white roof. It had a 272 V8, 2 barrel carb and 3-speed manual trans. After we moved to Avery Shores and I had another car to drive I decided to do an engine swap. I bought a well used '61 Ford Connecticut State Police car from a guy who worked for the Post Office in Wethersfield. It had a 390 solid lifter engine with a 4 barrel carb and 3-speed manual.

I wasn't quite ready to do the engine swap so I agreed to let my buddy Danny put the engine and trans into his '57 Ford 2-door hardtop. It must have been early November. We worked late into the night but I had to work the next morning so I left Danny to finish up. That night the temperature dipped just below freezing. The '57 was in my mom's garage but the damage was done anyway. A huge crack in the block. That was the end of the 390.

I probably waited until spring before I started working on the '56. By this time I had purchased a top loader 4-speed but still couldn't find an engine that I wanted. Finally in desperation I found a well-worn 332 at Parker Street Used Auto Parts. The big problem with finding a suitable FE for the right price was finding one with a flywheel and bellhousing. Most inexpensive FEs had automatic transmission. The 332 fit the bill.

A FE fits fairly well into a '56; I think I had to wrinkle the firewall just a tad but otherwise it was a bolt in. I even lucked out with a driveshaft. I had three or four hanging around and it was a simple matter of finding the right length and swapping the front yoke. I had to cobble together an exhaust system not having the funds to have one custom made. The front pipes were cut short and I snaked some flexible (leakable) pipe through the frame (the frame was X'd with cutouts for the exhaust) on each side to the dual mufflers. No tailpipes.

Before even putting the hood on I took it for a drive to the center of town. Going down Monument Hill Road, just past Wall Street near where the driveway that runs to the rear of Rankin's house, I got pulled over by one of the local cops. He said he was going to write a ticket for having no hood. He began flipping through his vehicle code but couldn't find the right section. As he was flipping through I saw the section and pointed it out to him. He put his ticket pad down and told me to just go home and put the hood on.

I always regretted never really finishing the '56. Maybe if I'd used the 390, maybe if I hadn't let Danny "borrow" it, maybe if I'd been more mature. Woulda, coulda, shoulda. But I didn't.

I drove around in the '56 for that summer. Had a good time with it. But like so many things in my life I just never got around to finishing it.
Email Post