Porsche yesterday (September 14, 2015) unveiled an electric sports car, or rather a concept car, at the Frankfurt Motor Show. 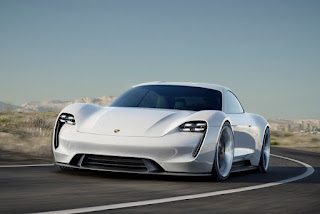 Porsche says the Mission E concept has a range of over 300 miles and can accelerate from zero to 100 kilometers per hour in 3.6 seconds. And when the batteries are almost dead you will be able to recharge them in 15 minutes!

Of course the Mission E is a concept. Concepts can do just about anything your mind can imagine. Porsche is a company that demands respect but for me the hype of the Mission E is akin to the crap GM used to spew about almost every new model. Remember the Vega? It was going to push the Japanese back to Japan. The X-cars? How about more recent models like the Solstice? That was going to revolutionize sports cars and kill the Miata. And then of course there is the Volt, a nice car but hardly the Prius killer we were told it would be.

So pardon me if I say I'm from Missouri; Porsche I'll believe it when I see Mission Es rolling off an assembly line.
Email Post

William Haskins said…
Love it! I'm a tutonic-autophile. Mercedes-Benz, Porsche, and Audi are some of the best-built autos for many decades.
September 16, 2015 at 11:26 AM