Cars as Mobile WiFi Hotspots? Give me Autonomous Cars!

I detest the idea of autonomous cars. I enjoy the art of driving. But there is a group, a growing group, of people who evidently see a car as an extension of their home, office or coffee shop.

This became obvious to me when I saw a Chevrolet television commercial recently. A focus group sits around a table; in front of each person are some car badges including the Chevrolet bowtie. They are asked to arrange the badges in order of which company they think is leading in 4g connectivity. All chose a company other than Chevrolet. Then it is revealed that Chevy is the leader. The end tag line is something like, "4g WiFi - it's all you want in a car." 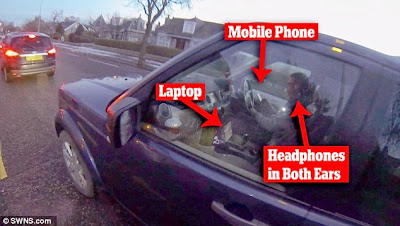 When Chevrolet decides to become a WiFi provider instead of an auto maker I have to rethink autonomous cars.

If there are going to be (or are already) millions of people driving on our highways connecting to who knows what instead of actually paying attention to driving it scares me. It is bad enough with cell phones and texting but now we are going to have rolling high tech cubicles. And it is obvious to even the most casual observer that the police have no real intention of cracking down on people who use their cell phones while driving. Our world has been taken over by people who are intent on multi-tasking behind the wheel and the police have simply given up (if they ever truly cared).

It is a testament to the safety of new vehicles that there aren't more deaths caused by those texting their bff's about who knows what while driving. I see so many close calls every day it scares me.

I really don't know what everyone is talking and texting about; I don't have that much to say to anyone. Business people say their cells make them more productive but I don't really see it. Statistics seem to be all over the place but it seems to me that we may be more productive in the things that don't matter. We were probably most productive during the Second World War and there were no cell phones then. If productivity is holding meetings I guess we rule.

All of this has made me rethink autonomous cars. If the techies don't have a company bus with WiFi to get them around let's put them in an autonomous car. Prevent them from actually controlling a vehicle because they really have no desire to do so - a vehicle to them is simply a means to get them where they need to be next.

But don't take over all the roads for autonomous cars; give them a lane or two but leave the fun stuff to those of us who want to experience the thrill of taming a machine.

I'm not picking on Chevrolet. Many car companies are racing to see who can have the best connectivity. They are all at fault in my book. They all say they are giving people what they want. Maybe but is it really what is needed?