Update! Can Mary Barra Change the Culture at General Motors? 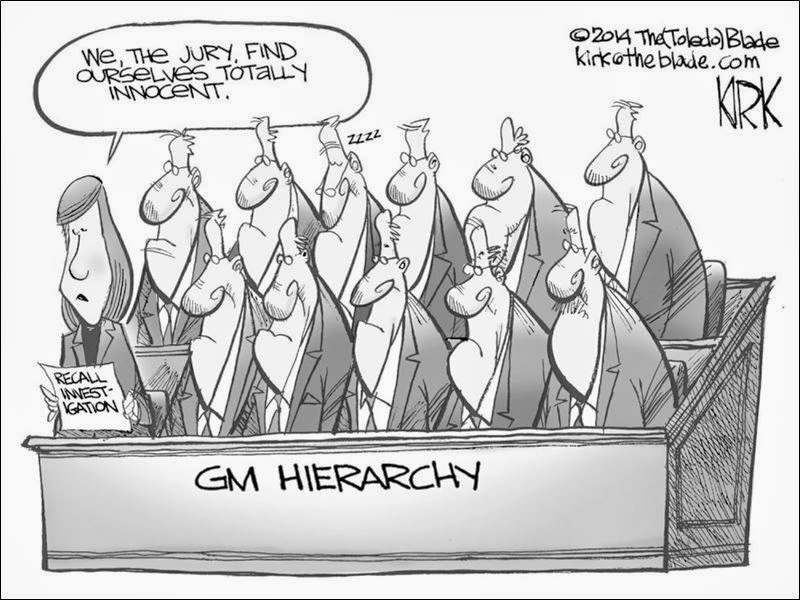 If you've been following the ignition switch debacle at General Motors you may wonder how it ever got so bad. For me that isn't the question; the question is can it be fixed.

A series of articles in Automotive News posed that question and also theorized that GM CEO Mary Barra has a unique opportunity to reshape General Motors. I am hopeful but at the same time doubtful.

The cartoon above echoes my sentiment. Although GM has fired what they say are the worst offenders - those who ignored all the warning signs - they have basically absolved the hierarchy of any blame.

I give General Motors and Barra credit for going outside for an investigator. The Valukas Report was very damning. But will the General really change course. I remember years ago reading that GM was like a huge ocean going tanker, almost impossible to change its course.

Over the years we have heard platitude after platitude heaped on the GM CEO du jour. I've met a few of them and although they were nice guys (and until Barra they were all guys) who had "gasoline in their veins" they all simply stayed the course. Even as they lost market share and shed divisions they professed that GM was the greatest. I remember one executive telling a group of auto writers that the only thing wrong with their cars was that buyers didn't truly understand how good they were.

Think of every single General Motors failure. The Chevette? It was going to turn back the tide of Japanese imports. The Cadillac Allante? The best combination of Italian design and American technology. Misstep after misstep that had many asking, "what were they thinking."

General Motors has a long, long history of arogance. I wish Barra all the best and hope she can change the culture but I'm not betting it will happen.
Email Post