Mustang Turns 50! The History of My Mustangs.

Mustang. The name says it all. From Wikipedia, "... the United States Congress recognized Mustangs as "living symbols of the historic and pioneer spirit of the West, which continue to contribute to the diversity of life forms within the Nation and enrich the lives of the American people."" And they were talking about the animal, not the car.

Last month, April 2014, the Ford Mustang turned 50. The first Mustang was sold on April 15, 1964, two days before the introduction at the New York World's Fair.

I went to the Mustang celebration at Las Vegas Motor Speedway and Shelby American. Huge number of Mustangs of all years and models. I'll post pictures and my thoughts later. But now I'm reminiscing about the Mustangs I've owned. There have been four.

My first Mustang was a '65 Coupe. I had a '67 Fairlane 390 GT that I had to sell. (It seems strange now that I was strapped for cash at that time - the Fairlane only cost $1,200 when I bought it and it was only a year old). The '65 was on a used car lot. It was gold with a black vinyl roof. I'm pretty sure it was originally a base 289 with a 3-speed manual. The engine had been modified when I bought it - solid lifters, Tri-Power, Mallory dual point distributor but with the 3-speed transmission.

I put a 4-speed top loader in it. That in itself presented problems. A top loader is physically larger than the 3-speed manual. When I tried to put the shift levers on the 3rd and 4th lever wouldn't fit if installed correctly; it jammed up against the trans tunnel. So I flipped it over. Fixed the problem but now the shift pattern for 3rd and 4th was reversed too (in the H pattern 3rd was where 4th should be and vice versa).

Someone had put a 9-inch rear in the Mustang. I have no idea why they did this but there was no filler plug. Some Fords had the plug in the rear of the axle housing, others it was in the pot. Whoever "built" this one used parts without a filler plug. They must have filled it through one of the axles; that's what I had to do.

The car ran well sometimes. The carburetors were always a problem. The end carbs would "freeze" shut and I'd have to stomp on the throttle to get them open. Then they wouldn't shut properly and the engine would idle at about 2,000 rpm. 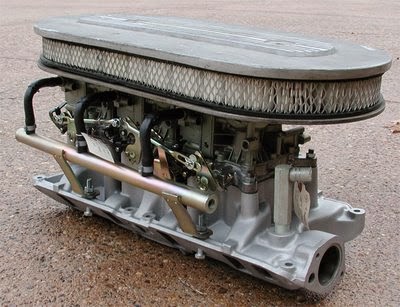 The Mallory distributor was a pain in the neck. The picture below shows the style of distributor cap. 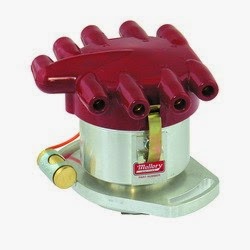 The front of the air cleaner sat directly over the distributor cap. In the winter snow would pack into the air cleaner, melt and drip onto the cap. There was a casting mark/ridge that was dead center for all the plug wire connections. The water would create a perfect path to ground and eventually the cap would crack and instant misfire.

I took the Mustang with me to Canada. Not exactly a great car for winter and definitely not a great car for someone living almost hand to mouth. In time I replaced the distributor with a stock Ford unit - it ran much better. The snow and salt took it's toll. I hit a chunk of frozen slush and cracked one header. I sold the Mustang.

Around 1973/74 I decided I wanted another '65. I bought a Fastback. I don't remember too much about the car except it was another solid lifter 289 this time with an automatic. And the floor was rotten. I didn't keep it very long. Body work was beyond me and floor pans were expensive (well more expensive than I could afford as a fledgling apprentice). I'm pretty sure I at least broke even on it though.

Next up was my beloved and missed '89 5.0. I bought it new in Toronto. It was around $16,000 Canadian. It got me to California. It went through some rough times. My ex spun it out in a snow storm in Toronto and over a center divider during it's first winter. I was not a happy camper. I got rear-ended by a '90 Mustang GT in rush hour on 280 near San Francisco. It leaked oil like a sieve. But it always started and ran strong. The gray paint fell off, evidently a problem because Ford repainted it under warranty but it never looked right after that. Despite all its faults I loved that car and hated to sell it but it was time to move on.

This isn't mine but except for the wheels it's the same. 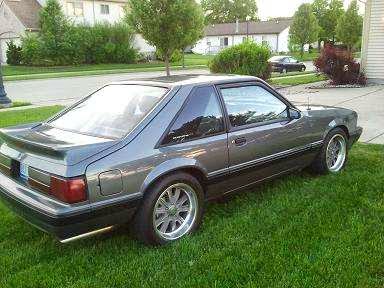 The last one was an early '65. Originally it was a 260 automatic generator coupe. I stripped its mechanicals and spent a lot of money on it. I got a 5.0 for free (it was recovered stolen property without any numbers), bought a 5-speed, 9-inch rear end, upgraded suspension, the works. I had it running but never finished it and then, again for financial reasons, had to sell it. I lost money on it. It was going to be the Mustang of my dreams. I asked the guy who bought it to keep me informed of his progress but I never heard from him again.

Those were my Mustangs. I miss every single one. I may never be able to afford another. Mustangs have gotten too expensive. Heck even new ones are priced too high for me. My '89 was one of the last affordable performance cars. But no regrets, there were valid reasons for moving on from each one.
Email Post