Are Pickup Trucks Too Big?

Every now and then I get into a discussion about our current crop of pickup trucks. My opinion is that half ton pickups are too big. The industry argument is that they get better fuel economy than ever before, which is true. But they are still physically too large.

Years ago my brother, a carpenter, worked on a house on The Filbert Street steps on Telegraph Hill in San Francisco. There was a lot of construction activity on Telegraph Hill at that time so parking was at a premium. My brother drove an '85 Toyota truck and he could always find a place to park. Many contractors were either forced to park blocks away or double park and pay the tickets.

There is more to a pickup truck than fuel economy. I really don't understand the "need" for a huge pickup. First off so many have such a high lift over height to load anything into the bed. Maybe every modern pickup owner is a muscle man but I'm not and neither is my brother. Why does anyone want a pickup bed that is shoulder high?

And the fuel economy argument isn't as simple as it seems. Yes modern pickup trucks get much better economy than even a truck ten years ago, and equal or better than many of the mini-trucks available. But wouldn't a mini-truck of today benefit from the same technology that the full-size trucks use? My '87 Toyota truck was rated at  27 mpg on the highway. It would seem to me that with modern technology a similar size pickup should be capable of at least 30 mpg.

Auto makers argue that they are giving the people what they want. I find that a strange argument. Ford introduced the Transit Connect as a smaller, urban friendly van. Yet they killed the Ranger because no one wanted it. Maybe part of the problem, as with all the remaining mini-trucks, is that the Ranger grew to non-mini proportions. 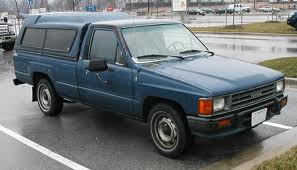 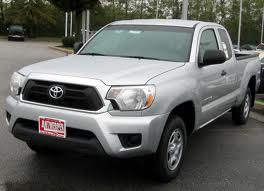