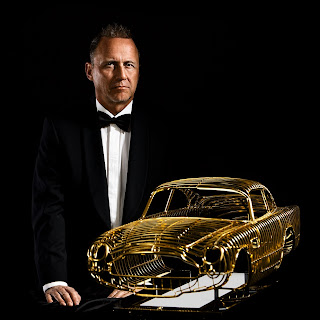 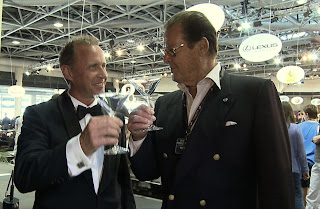 In 2010, Sir Roger Moore joined Dante at the Top Marques event in Monaco to unveil a second sculpture in his Iconic Sports Car series: the legendary Aston Martin DB5. The exploits of agent 007 and his gadget-laden car produced a world of avid James Bond fans, following the release of the 1964 film Goldfinger. “I was flattered to have Sir Roger Moore unveil this piece to the world,” said the artist. “His reaction when he unveiled my 24-karat interpretation of this great car confirmed to me that I have succeeded in creating art that brings people great pleasure.”
Dante’s works of art have been exhibited in glamorous and exotic locations such as Cannes, Florence, London and Miami and the premieres have attracted a host of royalty and celebrities. “It is fitting my newest sculpture be unveiled during a week that gathers the most significant automobile collectors and designers in the world, and during the event which is the greatest expression of class and elegance: the Pebble Beach Concours d’Elegance,” he said. The name of the individual who will unveil the Ferrari 250 GTO has not been revealed.
About Dante:
Dante Rubli is an artist based in Bern, Switzerland. He has been producing works of art for twenty-five years. Working with a variety of textiles ranging from wood and steel to gold and platinum, Dante has created custom furniture, sculptures and even automobiles for celebrities and collectors the world over. The Iconic Sports Car series delivers his most recent works in three scales, each of which can be supplied in traditional gold, white gold, silver and a selection of other luxury finishes. Each design in the series is limited to ten exceptional pieces. To date, the series includes the Aston-Martin DB5, Mercedes-Benz 300 SL Gullwing and Ferrari 250 GTO.
For more on Dante and his work go to http://www.dantedesign.ch/de/8858/sculptures.9212.html
Email Post