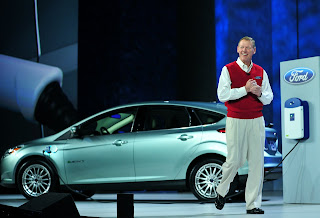 Automove News has a funny way of laying out its "Final Assembly" page. Top story is about how Bob Lutz didn't run for governor of Michigan in 2010. A far more important story is lower down on the right side, "Magazine calls Mulally top CEO."

Chief Executive magazine named Alan Mulally the top CEO of 2011. A panel of a dozen CEOs evaluated the 10 CEOs most frequently nominated by the magazine's readers and chose Ford's Mulally.

Here's a quote from the piece in AN, "The turnaround and triumph of Ford is an amazing success story, due largely to his talent, leadership and courage."

Strange that what Bob Lutz didn't do trumps what Alan Mulally did. Mr. Mulally doesn't run his mouth, he just gets the job done. My congratulations to Alan Mulally and Ford for a job well done.
Email Post