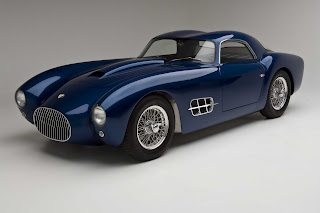 The Gatto, a daring high-performance coupe from the works of Oakland, CA, coachbuilder Steve Moal, will be shown among an exclusive section of sleek performance cars on display in the 3rd Annual Marin Sonoma Concours d’Elegance,  held May 15 at the at the Marin Civic Center Fairgrounds in San Rafael, CA.
Created for Marin County collector and sports car enthusiast Bill Grimsley, the steel blue Gatto is powered by a rare Ferrari V-12 3.0 liter 300 hp GTO engine and has been hand-fabricated and assembled over a near three year period in the classic European carrozzeria – or coachbuilding -- method. From its Borrani wire wheels to Zagato-like double bubble roof, braking vents and Maserati-like grille, the Gatto fulfills its appellation as the Italian cat.
Utilizing Moal’s unique touch with aluminum bodywork, which is affixed to a semi-monocoque chassis in an early 20th Century technology known superleggera  -- or super light – the coupe weighs only 2300 lbs.
Moal, whose family has perfected custom automobile styling and craftsmanship for a century in Oakland, is renowned for his ability to unite motifs and motoring themes from various disciplines – everything from early American hot rods to mud-tossing Midwest sprint cars and Grand Epoch European classics.
More than 175 vehicles and a flotilla of classic wooden speedboats (on display in the fairgrounds lagoon) will be shown at the Marin event. The featured marque is Rolls-Royce and is headlined by one of the world’s most opulent motorcars, the 1925 Rolls-Royce Torpedo Tourer built for Indian maharaja Bhupinder Singh.
Honoring a century of two American motoring institutions – that of Chevrolet motor cars and racing at the Indianapolis Speedway – there will be a display of Chevy vehicles and rare Indy roadsters that graced the starting grid at the fabled Brickyard.
Vintage motorhomes and trailers will be on display along with a rare collection of metal-bodied American station wagons and micro cars. The event will play host to a special British car club gathering.
The Marin Sonoma Concours d’Elegance is a non-profit fundraiser to benefit Hospice By The Bay and will also include “The Drive,” a separate motoring event on Saturday, May 14.
General admission to the Concours d’Elegance is $20 adults, free for kids under 16. Hours are 10 a.m.  – 4 p.m. For information, phone (415)479-7727 or view the event website, www.marinsonomaconcours.org.
Email Post