The Toyota Makes the Trek to Vegas 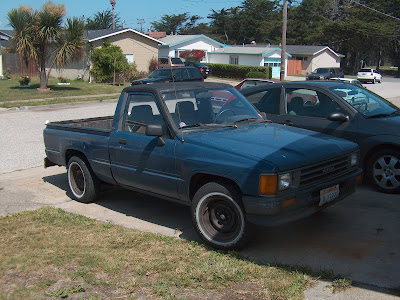 As many of you know I have a 1987 Toyota truck. You may have also heard that I’ve moved to Las Vegas. Against the advice of a friend (Tony) I opted to drive the Toyota from Pacifica to Vegas, a distance of just under 600 miles.

Now this is not your average 1987 Toyota truck (or maybe it is); it has well over 200,000 miles (the odo shows just under 204,000 but it stopped working back last spring). It’s spent the past eight or nine years on the coast so it’s got some rust, hence the bedliner faux vinyl roof.

When I bought the truck it only ran on three cylinders, one exhaust valve was burnt. I replaced the valve, lapped in the others, put in a new timing chain with guides and it’s been purring like a old but satisfied cat since. A year or so ago I replaced the noisy 4-speed manual with a used 5-speed. Within the past year I sprang for four new Michelin tires.

There were two reasons for taking the truck to Vegas. First was it is my primary means of transportation when I don’t have a press vehicle to drive. Second I had to get all my tools and equipment there and as movers charge by the pound I figured I’d save a bunch. I probably loaded close to a half ton into the Toyota’s bed.

Early one morning in the first week of January 2011, I pointed the Toyota southeast and in around 10 hours I arrived at our new home. Outside of one worrisome stretch in the Mojave when I was sure I was going to run out of gas, the trip was uneventful. The trusty Toyota averaged 61 mph (plus or minus a couple) and 21 mpg.

All of this isn’t bad for a truck I paid $900 for all those years ago. She ain’t pretty but she sure can cook.