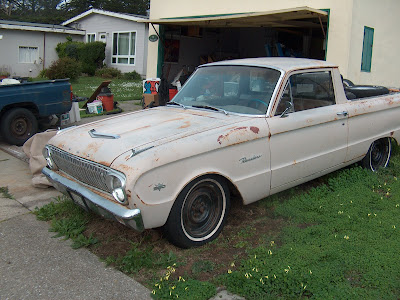 I've had this '62 Ford Falcon Ranchero for 4 0r 5 years. It is a 260 V8, manual transmission car - it was a 6-cylinder car that was "updated" to '63 V8 specs before I got it. It overheated terribly when I got it, I mean Old Faithful eruptions.
The guy I bought it from said he'd replaced the head gaskets twice and the problem didn't go away. He figured it had a cracked head or something and foolishly I accepted his diagnosis - until two weeks ago.
For some reason I decided to tear it apart and find out what was wrong once and for all. First out was the radiator. Don't know why I didn't bother to check it earlier but yup, it was at least 50% plugged. As soon as I took it into my local radiator shop the guy took one look at it and said, "65 Mustang 6-cylinder." No I said. Well, he said, it's a 6-cylinder radiator, you can tell because the bottom outlet is smaller than a V8's. Okay, new radiator.
Figuring I ought to check the heads, I pulled them off. Problem number two. The head bolt torque was all over the place, either a result of erratic torquing or from the overheating. One head bolt broke - center top bolt on the left side. It broke off flush with the block. I've never drilled out a head bolt or used an bolt extractor. Of course it didn't go well; broke off a starter drill bit in the bolt and that was that.
So I figured that there should really be much tension on the bolt; the clamping force comes from the bolt against the head. I reasoned that maybe the only thing holding the bolt in now was gunk. So I sprayed penetrating oil down the threads, blew it out, and repeated many, many times. Eureka! It worked, the bolt loosened up enough that I was able to gently tap it counter-clockwise and it came out.
Before taking off the heads I had removed the distributor (it doesn't need to come out for the heads but it was advanced (physically but not timing-wise) too far. (Ford distributors usually have the vacuum advance unit point just about straight ahead, this wasn't). Pulling the distributor out and the oil pump shaft came with it; it's not supposed to but no biggie.
I then pulled the timing cover figuring that maybe the timing chain had jumped (it had about 20 degrees of slack in it).
Then I went out and bought parts; engine gasket set, timing chain set, and new head bolts (note: ARP does not list a 260 V8 but upon checking bolt length, 289/302 bolts are correct).
I laid a straight edge over the heads and found them to be acceptable but I had a quandary. The 260 valves (1.59"/1.39") are minuscule and I have a set of 302 heads with 1.84"/1.54" valves. Hmmm. Well the 302 heads will fit but they have a larger combustion chamber so they will lower the compression ratio a tad. Plus the bigger valves really don't do much at low rpms and this engine is old so I'm not going to crank it too high. So I reinstalled the 260 heads.
Next up was to replace the timing chain. When I removed the cam sprocket the little locating pin that's pressed into the cam came with it, or a part of it did. Great. But I did find out that the chain hadn't jumped, the sprocket turned on the cam. Now I need more parts, a camshaft.
But I don't have money for a camshaft. Wait, there's that 302 sitting there and yes, the cam fits. Swapped cam and lifters. This project is getting more involved by the day.
It's not finished yet but it's getting there. I've decided to do this old style, junk yard style. Used parts. Got an Edelbrock aluminum intake and 600 cfm Edelbrock 4-barrel carb. Found a used set of Tri-Y headers to put on. Then engine came with a set of Weiand valve covers. I just might make a driver out of this thing yet.
Stay tuned.
Email Post