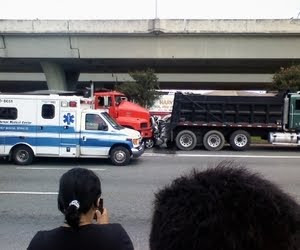 Have you seen that new VW commercial? The “Shoot the gap!” television ad. I normally don’t pay that much attention to most ads on television; I find many to be confusing (It took forever for me to figure out that the Dodge commercial with the two red stripes was a new logo), silly (the Ford Fiesta ad with the unicyclists), or just forgettable. A few are cute.

Then there are the ones, like “Shoot the gap!” that I find irresponsible. If you haven’t seen the ad, it shows a youngish couple going for a test drive in a Jetta. The male is in the driver’s seat, the salesman is in the front passenger, and the woman is behind the salesman. The salesman is extolling the performance of the Jetta. The male driver says something to the effect that “they” are conservative drivers. Just then the woman, seeing that a gap between two big rigs is closing, jumps up and down screaming, “SHOOT THE GAP! SHOOT THE GAP!” urging her partner to scoot between the big rigs into the ever decreasing gap.

Yeah, VW shows the prerequisite disclaimer about it being performed by professional drivers on a closed course but the subliminal message is not all that subliminal – You can be a jerk and weave in and out of traffic in a VW Jetta. Just what we need on the road, more self-centered idiots driving like they own the road. I wonder how a 2010 Jetta will fare sandwiched between two or three big rigs?