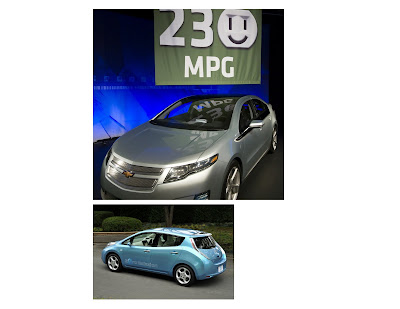 In the world of public relations reality is fluid. Chevrolet announced today that the Volt will get 230 mpg. Can you imagine that? 230 freakin’ mpg! Man, I’d be able to commute to work for about $4.50 a week, as opposed to the almost $42.00 I’m spending now! I could save just under $2,000 per year on fuel alone!
Of course the Volt is expected to cost north of $40,000, and my Toyota truck is paid and depreciated. But think of it, if I saved $2,000 per year in twenty years the Volt would pay for itself! Of course that’s leaving out the increased insurance costs.
And then there’s the problem that the 230 mpg is dependent on the Volt running on electricity almost all the time. Chevy says the Volt is expected to travel “up to” 40 miles on a single battery charge. Hmmm, I work just over 30 miles from home, and there’s nowhere to plug in at work so I guess my mileage may vary, as the saying goes.
Then there is the sticky problem of the EPA not having certified the Volt’s mileage yet. Maybe that’s what the press release is about, convincing politicians to intervene to pressure EPA to give the Volt a great rating.
Admittedly figuring out the mileage for a hybrid is difficult. And figuring out how long a charge lasts is complicated. But let me ask you; is the estimated charge life of your laptop accurate?
I do not wish the Volt any ill; in fact I hope it is a smashing success. I just think that all the hyperbole Chevy has put out may doom it. They may have raised expectations way beyond the reality.
Toyota ran into this problem with the Prius. They hyped the heck out of the EPA mileage estimates for the second generation Prius and when normal people, driving normally found that they got much less there was a PR nightmare.
The Volt, like every other hybrid, should be taken for what it is. Chevy needs to get the Volt into full production and onto dealers’ lots. Let the car speak for itself. If you tell me it will get great mileage, fine. But if you tell me it will get 230 mpg and it only gets 100 mpg, I might be pissed, even though that is a fantastic figure.
Chevy also needs to rethink its pricing - $40,000 grand is just too much. A Nissan Altima or Toyota Camry Hybrid starts at around $26,000; I really don’t know if people are going to be willing to pay an extra $14,000 for the Volt, at that price the Volt will be the hybrid for the upscale.
Meanwhile Nissan recently announced the “Leaf,” an all electric vehicle that they say will be on sale in late 2010. The Leaf doesn’t get any mpg – it doesn’t use any gas or diesel, it is purely electric. Nissan says it will have a range of 100 miles per charge. No price has been announced.
Now an electric car that goes 100 miles per charge would be useful, especially here in the San Francisco Bay Area where many people commute almost that far every day and technology rules. If Nissan prices the Leaf correctly I expect it will be a hit in many urban markets.
Email Post