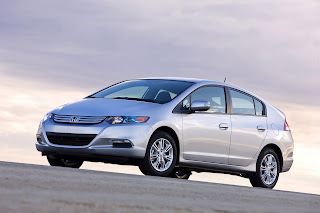 I had to drive to LA a week ago (I guess I could have flown but flying isn't that much fun for me) and I wanted a car that got great mileage. Often the auto makers don't like us to put too many miles on their cars so a long trip is frowned on. Honda was kind enough to let me take a 2010 Insight hybrid on my trip and I am most thankful.
The Insight is all new for 2010, replacing the Civic Hybrid that just didn't seem to catch the attention of the hybrid fans. Rather than building a hybrid that looks just like their bread and butter Civic, Honda decided on something that stands out in a crowd.
Honda also decided to make their hybrid price attractive - it is available for less than $20,000 and Honda says it is the most affordable hybrid available.
Although nominally a five passenger vehicle, like most cars its size the Insight is really better suited to four. I had four adult males in it and they fit fine with one exception. If you're over about 5' 6" you better make sure to duck when getting in or out of the rear seat. The roof line slopes and although there is ample headroom inside, the door opening follows the roofline and cuts into the entry headroom.
The Insight is rated at 43-city, 43-combined, and 41-highway. I drove a steady 75 mph on I5 and the Insight returned just about 42 mpg.
Except for the head bumping issue I can't fault the Insight - fuel efficient, clean, reasonably priced, comfortable, and Honda reliable. Check it out.
Email Post