Is this what you expect from a company on the ropes? 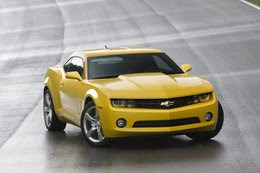 The new Camaro is at a dealer near you.  That's right, you can run on down to your local Chevy dealer and plunk down some long green on a 2010 Camaro.  But you better bring some Vaseline with you because some dealers figure you're good for a whole lot extra.
You would think that Chevy dealers, who like most dealers, are suffering from poor sales right now might use aggressive pricing to get a fanny in a driver's seat.  Well they are being aggressive, aggressive about getting every cent they can from you.
Putnam Chevrolet Pontiac, a local Chevy dealer, has one Camaro in stock, a bright yellow V6. A base Camaro V6 lists for $22,995.  Putnam wants $5,000 over list for theirs.  So while they can't sell a Hummer to save their soul, they want to stick it to you for the one car they might actually have more than one customer for.
Putnam isn't alone.  Other Chevy dealers are doing the same, as are Dodge dealers for the Challenger.  You would think that these two companies, one filing bankruptcy and one on the brink, might actually try to move some iron by cutting prices.  You might think that dealers, many who are on the edge and reeling from huge financing costs and non-existent sales, might follow suit.  Think again.  When the going got tough they just try to stick it to you a little deeper.
Don't forget that you are already giving both Chrysler and General Motors billions of your tax dollars; both have received billions in bailout funds.  Yet their dealers want to stick it to you even more if you decide to help them out and buy one of their products.
To be fair, neither GM nor Chrysler can force a dealer to sell at a set price.  The Manufacturer's Suggested Retail Price (MSRP) is just that, suggested.  It is a shame that some dealers want to make up for poor sales by sticking it to the very customers that still support them.
My suggestion?  If you really want a new Camaro or Challenger, find a dealer who is interested in selling you one at MSRP.  Show your support for a dealer that isn't out to gouge you.  Tell the guys who figure you should give them extra money just for the privilege doing business with them that you'd prefer buying from someone with a long term view.
Email Post