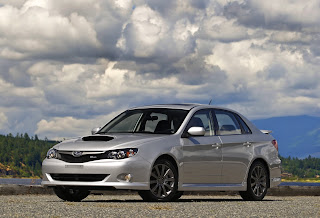 Okay, so I caved in and took a Subaru. It doesn't mean I've forgiven Subaru for dissing my town. Two years ago I requested a WRX STi and was turned down because Pacifica is too small a market. It still irks me. If anyone in Pacifica buys one STi, Subaru more than makes up for the expense of letting me drive one for a week.
Griping aside, I got a '09 Subaru WRX Sedan delivered yesterday. You know I've always liked Subarus, from way back when I had a friend who worked for one of the first Subaru dealers in Canada. They are rugged, enough off center to appeal to the rebels of the world, and well appointed. Until the WRX showed up they were never considered powerful.
The '09 WRX's 2.5-liter, DOHC, flat-four pumps out 265 turbocharge horses, giving the 3,200 (+/-) pound 4-door sedan enough power to keep up with the big boys.
I've only had the WRX for a day so I haven't fully settled in to it. I do have one complaint, it's not specific to Subaru but it does seem worse on this WRX, the off-gasing, the chemical smell from a new car, is intense. I actually had to leave the sunroof open last night to air out the interior.
The WRX Sedan is a very nicely equipped car, kind of a combination luxury and performance. It is priced at $30,190, not cheap but competitive.
Email Post