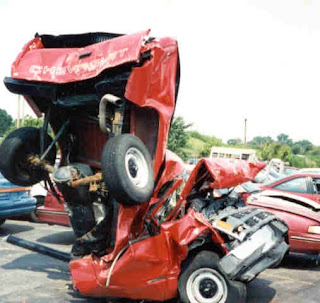 Wow, who would believe that if you slam a large car into a mini car that the mini car would get the worst of it? This is ground-shaking news, stop the presses, scrap the front page!
The Insurance Institute for Highway Safety (IIHS) smashed who knows how many cars and spend untold dollars to prove that BIG will crush small in a head-to-head slam fest, generally speaking. So their conclusion - That you are much safer in your big gas-guzzling behemoth than in your fuel-sipping, small carbon footprint mini car.
Hey IIHS, thanks for the scare tactic. Now let's look at reality. The National Highway Traffic Safety Administration (NHSTA) reported that the 2008 highway death toll was the lowest since 1961. Not only that but the number of deaths per 100 million vehicles was 1.28, the lowest figure on record.
So while the IIHS is trying to scare buyers away from small cars, the truth of the matter is no matter what you drive, you have a much better chance of surviving an accident today than ever before.
Another side of the coin is that no matter what you drive, if you drive like an idiot and you run into something, you run the risk of injury or death. Slam your gigantic SUV head first into a solid object at 70 mph and you will probably die. Slam your gigantic SUV head first into a semi and you most probably will die.
Choose your vehicle carefully because its safety enhancements are important. But hone your driving skills first, pay attention when you drive, avoiding a collision will do more for your physical well-being than all the air bags, seat belts, and the size of your car.
Email Post