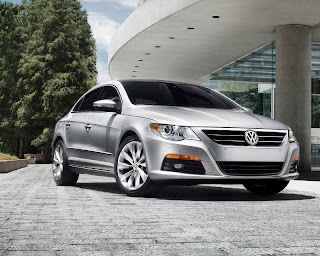 Sometimes I think I may be just a touch thick.  I don't understand why VW keeps trying to sell upscale vehicles.  A few years ago VW tried to convince the buying public that the Phaeton, priced up to 90 grand, was just what they needed.  The buying public said otherwise.

Now VW has introduced the CC, a "coupe-like sedan" that is priced to do battle with pricey Euro sedans, including VW's cousin Audi.  On first glance I thought the CC was a bit pretentious, maybe once again trying to reach too far.  After a few days in the CC I'm still not convinced of the marketing strategy but the car itself has grown on me.

There are many things that drive me nuts on many German cars.  The controls may be second nature to many but not me.  There are often zillions of tiny switches with hieroglyphics.  For the most part the CC's controls are pretty straight forward and easy to use.

The CC is not as large as it looks; it's about the same size as a Honda Accord.  (VW I have seen in a long, long time.  The gaps between panels are kept tight and even.  The materials, even the plastics, are first rate.  And the paint, well this is one of, if not the, best paint jobs I have seen outside of a custom job.

The CC drives really nice - the suspension is taut, the brakes right there, and the power is excellent.  The 6-speed automatic can be shifted manually both in Drive or Sport mode.

To give you an idea about whether VW might be successful with the CC, the day I got it when I went out to the office parking lot two guys were looking it over.  When the saw me getting into it they said, "We can't believe it's a VW.  We thought will probably hate that I compare the CC to a Honda.)  This is one of the best assembled cars it was a Mercedes."