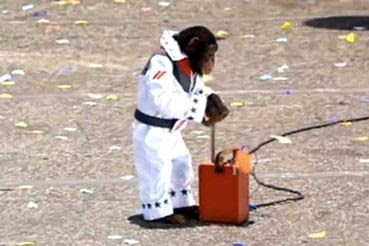 In this weird world we live in one car company is taken to task for using a chimpanzee in its ad while another gets no notice for featuring a "side show."
Dodge originally ran a TV ad for a "tent event" that featured a chimp in an Evel Knievel suite pushing the plunger to detonate a confetti bomb (http://www.youtube.com/watch?v=fCEsSqUYBjE). Not exactly high art but kind of funny. PETA (www.peta.org) went ape shit. So Dodge did what any politically correct person or organization would do, they removed the chimp; literally (http://www.youtube.com/watch?v=CXYfDO9mS4o).
BMW has an ad that no one seems to find offensive except me (http://www.youtube.com/watch?v=tN7J7NyrEsY). The commercial extols the BMW 3 series and includes a fleeting scene in the 30-second ad of a sideshow. You know, one of those impromptu gatherings of idiots who spin their cars in circles amidst a crowd of other idiots. Sideshows are illegal in many jurisdictions yet BMW seems to thing they are neat.
Dodge gets taken to task because the chimp, by simple virtue of appearing in the ad, is being mistreated. BMW gets a pass for showing an illegal act that often hurts (or kills) real people. Go figure.
Email Post