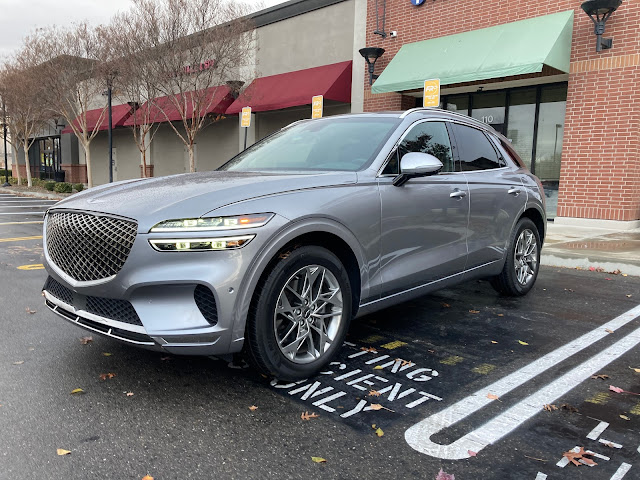 In six short years Genesis has come from a newbie on the luxury auto scene to a real contender. I've driven a fair number of Genesis models and they have all impressed me. The 2022 GV70 is not an exception. 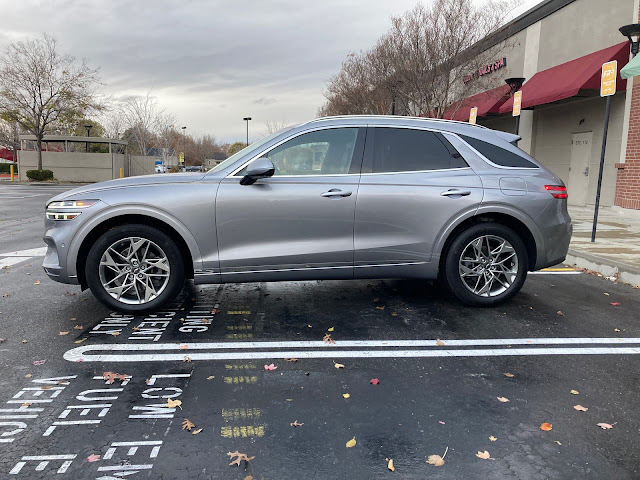 With an overall length of 185.6" on a wheelbase of 113.2" the GV70 is maneuverable enough for around town but long enough so that everyone inside has ample legroom.

There are two engines available, a 300 hp, 2.5-liter 4-cylinder, and a 375 hp, 3.5-liter V6. The test GV70 had the 4-cylinder. Now I'm not one to shy away from more power but the V6 is substantially more expensive and it gets less mpg. I have to say the 4-cylinder is one of the smoothest I've driven. And considering that the GV70 weighs around 2 tons it is darn quick - it gets to 60 mph in around five and a half seconds.

Fuel economy is rated at 28-mpg on the highway, and 22 around town. I had no problem equaling the highway figure but I guess I drove it too hard around town because it fell short there. 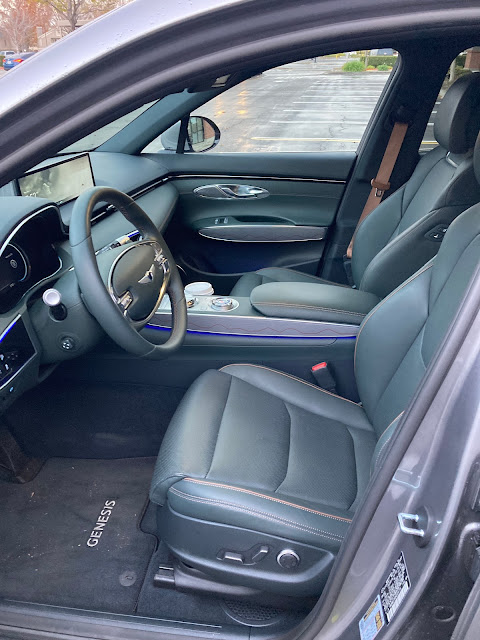 Thankfully the GV70 does not have white seats although a 'Vanilla Beige' is available. I found the front seats comfy and supportive. 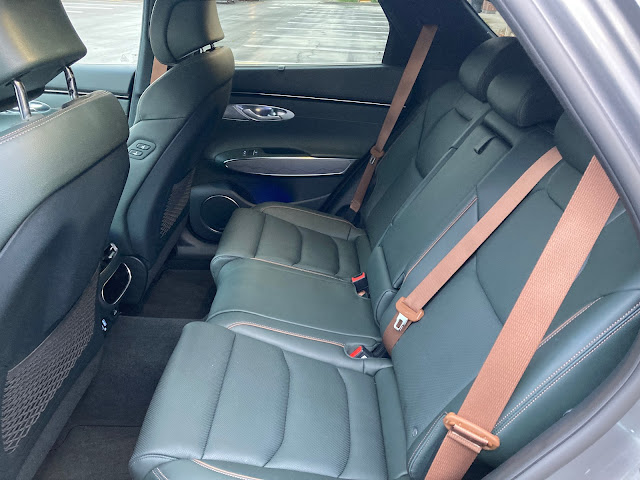 Although the GV70, like so many vehicles, is listed as a five-person vehicle. The rear center seat looks (and is) less than inviting. I'm not sure about the contrasting color of the seat belts but they sure are easy to find.
My wife thought some of the trim didn't look luxurious enough. I thought it was fine. I am not a fan of shift dials especially when they are next to another similar size dial. Shift levers work just fine; I don't know why so many auto makers are intent on reinventing things that everyone is familiar with and can instinctively use. 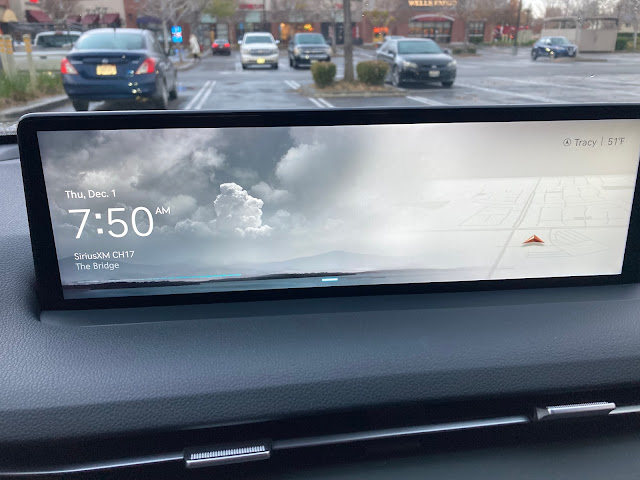 I found it humorous that the touch screen depicted the weather that I could see out the windshield when you get in the GV70. "Oh look it's cloudy!" 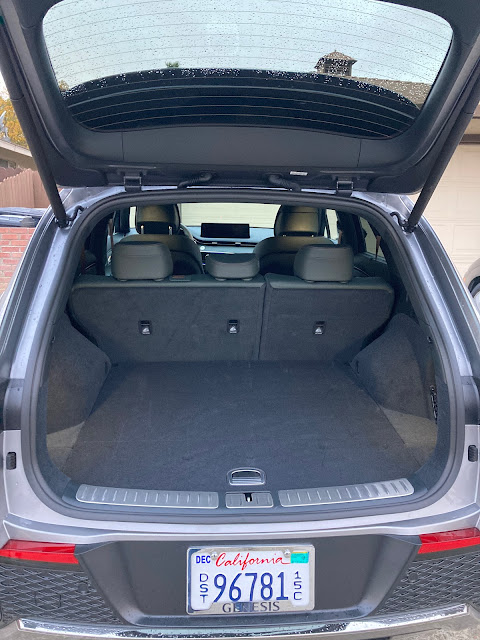 One of the benefits of a SUV, any SUV, is the cargo room. The GV70 is no different. There is 28.9 cubic feet of storage behind the seats, and 56.9 cubic feed with the rear seats folded down.

The GV70 is not your load up the whole football team SUV, it's more in the vein of a comfortable vehicle for you and two or three others to head up to ski country for a weekend. Get some ski racks for the roof, stow all your other ski gear in the back and off you go.

The test GV70 had optional 19" wheels and 235/55R19 tires. Even with AWD out here in sunny California if you head to ski country you are going to have to chain up. If you live where it regularly snows you shouldn't depend on AWD with all-weather tires to get you where you're going. Buy some snow tires! 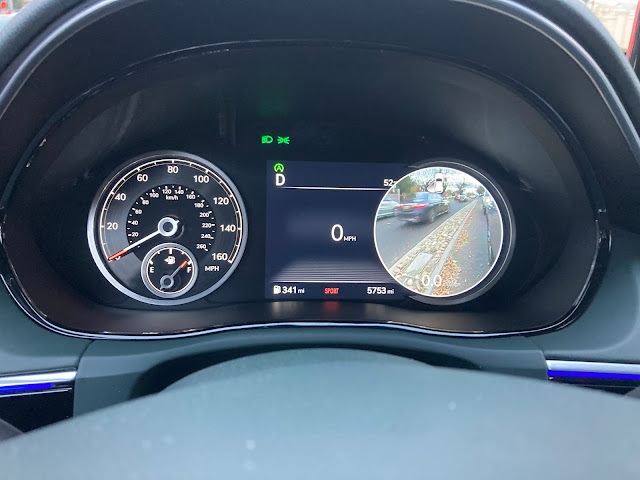 Although the GV70, like all Genesis models, is loaded with high tech stuff it generally stays in the background. One feature I like is the screen that shows up in the instrument panel when you use the turn signal (that lever on the left of the steering column that so many can't locate). The screen shows what is behind you on the side you indicate you are turning. Nice safety feature.

There are five different drive modes - SNOW, ECO, COMFORT, SPORT, and CUSTOM. Eco is the default and other than checking to see the differences I just left it in Eco.

I really could not find a fault with the GV70. It is a great SUV for four people (yes it seats five). Settle in for a road trip or just to the grocery store, it's got you covered. 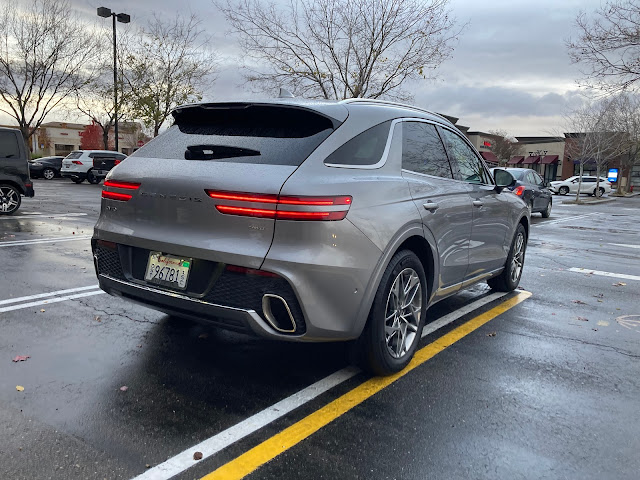