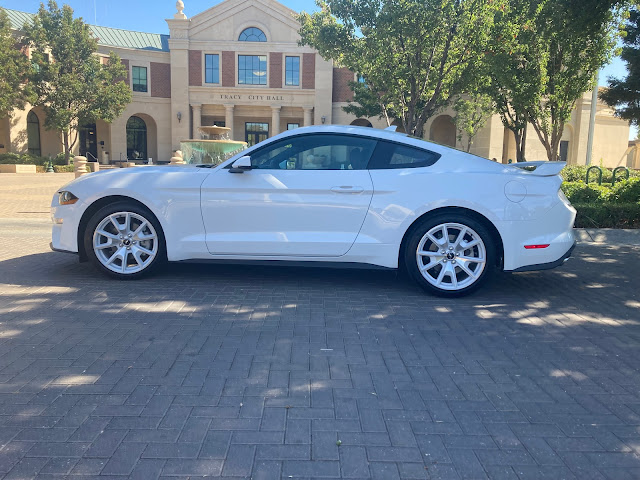 I like Mustangs, in fact I've owned four (three '65s and an '89) so you'd think I'd be over the moon about this 2022. I liked it but it just wouldn't be on my 'gotta have' list. You might also think this is because it only has a 4-cylinder engine. Nope, the 2.3-liter EcoBoost is great. In its base form it makes 310 hp. and 350 ft-lbs of torque. That is more than enough to embarrass many V8 cars. Zero to sixty mph takes just around 6 seconds. A performance version ups that to 330 hp.

Regardless of the vehicle weight the EcoBoost is a fantastic engine. It's smooth, and maximum torque of 350 ft-lbs is at 3,000 rpm. When the power comes on it doesn't swat you in the back, it builds steadily. This is not your economy four, although it is frugal. It is rated at 29-mpg on the highway and 21-mpg around town. I saw a tad over 30-mpg on a 70 mile round trip highway run with a few miles of city driving in the mix.

The front seats were excellent, at least for me. The back seats are another story. Sometimes my wife likes to ride in the back seat. Getting into the back seat even with the long doors requires more than a little agility. Even my wife needed to put the front seat forward to have comfortable legroom (and she's just a wee lass). This is the way it's always been with a Mustang; the back seat is not a place for adults.

Those long doors, needed to allow access to the rear seat, can be a problem in a parking lot too so use caution.

One of the great things about many modern cars, and the Mustang is no different, is that you can tailor the car to your desires. It's also one of the problems with many cars - too many choices. There are four modes for Exhaust Mode - Quiet, Normal, Sport, and Track. Quiet is okay but the rest were just annoying to me. Maybe kids like a loud car, and I don’t mind the rumble of a V8, but Sport and Track make the EcoBoost sound like one of those 4-bangers with the big ‘fart can’ muffler. I prefer stealth. Unfortunately Normal is the default and it is not that quiet. Why there is a default is beyond me, just set it how you like it and let it stay that way.

Then there are five drive modes - Normal, Sport+, Track, Drag Strip, & Snow/Wet. So many choices! You know that the younger owners want the exhaust LOUD and the drive mode Drag Strip all the time. But most of the younger buyers will opt for a V8.

Once behind the wheel I enjoyed the Mustang. Yes it feels big and heavy but it also felt relatively nimble. As much as I liked the 6-speed manual transmission the 10-automatic would be my choice if I was buying. Why? Because the automatic is a fine transmission and it provides slightly better economy. You can shift the automatic yourself if you’re so inclined. Heresy I know. 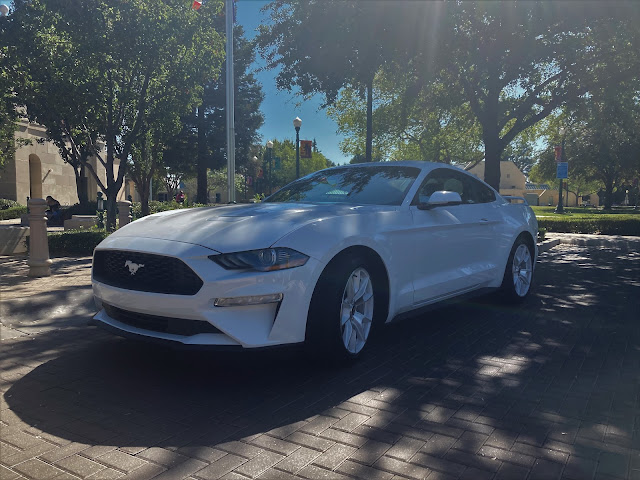 I would never – NEVER – opt for a white Mustang though. And the test version was white everywhere. The paint is “Oxford White”, there was the “Mustang Ice White Appearance Package” that included 19” white aluminum wheels and white interior accents. It is just too much white.

I’m torn over the EcoBoost Mustang. A part of me, a big part, likes the engine. But it is over shadowed by its bigger brother, the DOHC, 5.0-liter V8. What the EcoBoost needs is a rear-wheel-drive car that weighs no more than 3,000 lbs. Now that would be a 4-cylinder Mustang I’d buy. .

There are two versions of the EcoBoost Mustang. The base starts at $27,470, and the Premium that starts at $32,495. The test Mustang was a Premium with almost $7,000 in options (yup that fancy exhaust is part of an optional package). You would pay about ten-grand more for the lowest priced V8 so I can see the appeal of the EcoBoost. 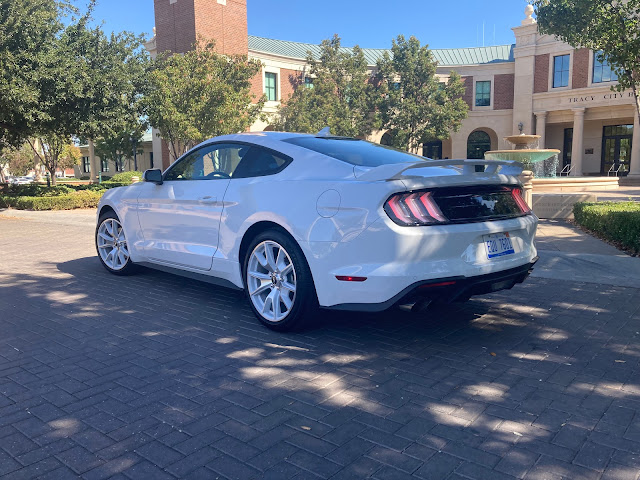 Cindy Meitle said…
Very curious why you took issue with the weight of the car. If the power and speed is there, what is the negative of the weight?
October 11, 2022 at 2:09 PM

Bruce Donald Hotchkiss said…
Without that extra weight it could be the equal of the V8 and probably get better economy.
October 11, 2022 at 2:16 PM