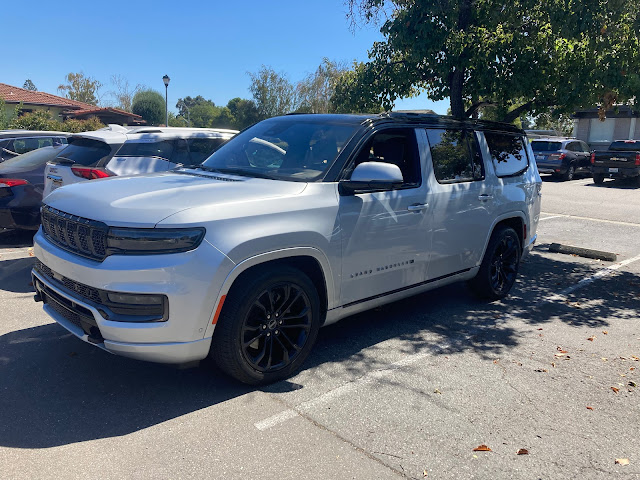 I read a review of the new Grand Wagoneer that basically said that there is really no reason for the vehicle. I can think of two reasons; first because people want big SUVs, and second because there is a ton of profit for the auto maker.

But is the Grand Wagoneer really a Jeep? It is part of the Jeep web site (jeep.com) but it is listed apart from the 6 Jeep Brand vehicles. The Grand Wagoneer and the Wagoneer are under the heading 'Wagoneer' and separate from the 'Jeep Brand Vehicles' Grand Cherokee, Compass, Cherokee, Renegade, Wrangler, and Gladiator.

The transmission is an 8-speed automatic with a 2-speed transfer case. I doubt too many Grand Wagoneer owners will actually go off-road but it's nice to know that if you have to, you can. You might want to change the tires though. The 285/45R22XL All Season tires may be okay for most conditions but not rugged off-roading (just my opinion).

I think the Grand Wagoneer is in the vein of an Escalade. It is rapid and comfortable, meant for first class travel wherever the road may take you.

The exterior styling? I could take it or leave it. The fit and finish is great but it's just a big, squarish vehicle. But inside, ah that's what matters. It is one of the nicest SUVs on the market in my opinion. No matter how good the photos are they don't do justice to the luxury inside the Grand Wagoneer. Attention to detail is what does it.

There's no shortage of technology packed into the Grand Wagoneer. Most of it was fairly intuitive but I had to get out the manual now and then, and the manual is bigger than some novels I've read!

Like most modern vehicles the Grand Wagoneer has a wireless phone charger. Except I couldn't find it. The manual said it was under the center screen. Huh? There are two screens the upper main one for maps, sound system, etc., and a lower one that shows the seat adjustments. I couldn't see any charger below either. I gave up. Then a little later I was pushing buttons to see what they control and lo and behold the lower screen opened to reveal the wireless charger! It's also a great little hiding spot.

The first challenge when driving a vehicle of this size is the size. I'm not used to driving big vehicles, I have to relearn how to drive. The commanding view of the road is great. It's just that lanes and parking spots seem so narrow. But I coped. The upside is that all those big rigs don't seem quite as big. 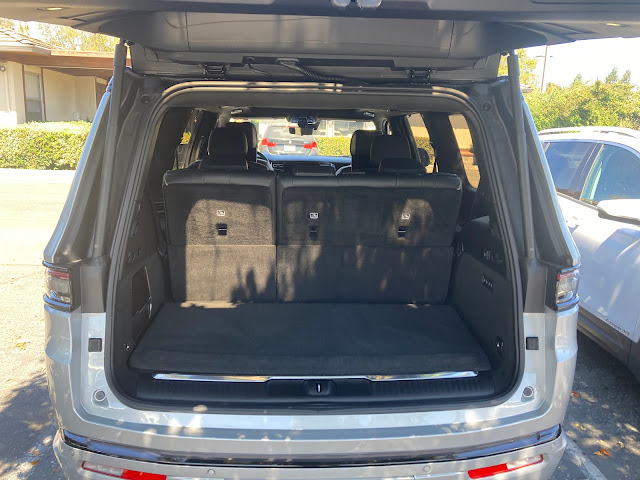 With the second and third row of seats up there is 27.4 cu. ft. of storage, put the rear seat down and that goes up to 70.8 cu. ft., and with the middle seats down you have 116.7 cu. ft. But you know it's almost too nice to put anything but luggage back there.

If you tow the Grand Wagoneer can handle up to 8,850 lbs. That should handle your horse trailer or boat just fine.
One feature I really like is the fold down running boards. The ones on the Grand Wagoneer are a perfect height and wide enough for my big feet. I like the way they blend into the rocker panel.

For a vehicle this size the fuel economy isn't that bad, and at 13-mpg city and 18-mpg highway (I saw 20-mpg on one short highway trip) it is competitive.

If you're in the market for a full-size, luxury SUV you owe it to yourself to check out the Grand Wagoneer.