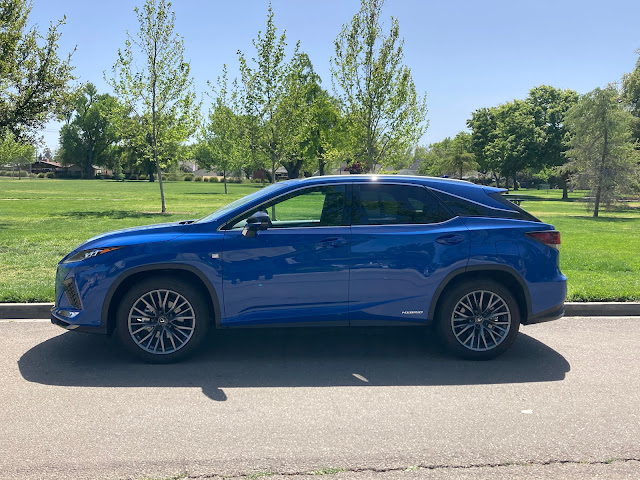 Lexus equals luxury right? That got me thinking "What does luxury mean in an automobile?" Luxury to me may be, and probably is, different than it is to you.

Way back in the 1950s through the 1970s luxury to most North Americans meant being insulated from the harsh world, being able to spread your Grey Poupon without fear of getting any on your Savile Row suit. Potholes were for peasants.

Those who bought cars based on how well they cornered sneered at the 'land-yachts' and 'luxo-barges'.

Then as the demographics of luxury car buyers trended younger, luxury became more European, meaning you could be insulated but still enjoy the driving experience. Miss Daisy moved from the back seat to the driver's seat.

I think that today's medium priced cars have many amenities only found in yesterday's luxury cars. It seems to me that unless you go to one of the uber-luxury vehicles (say something well over $100,000) the jump from the middle to the top is more of a small step. Many luxury vehicles from the major manufacturers are based on models from their less expensive lines.

I'm not saying that a Lexus that is based on a Toyota model isn't more luxurious but that the devil is in the details. 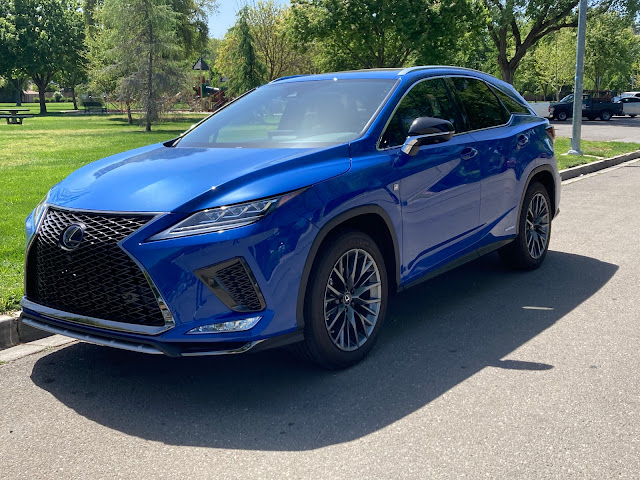 Which brings me to the 2022 Lexus RX 450h F Sport AWD. What makes a Lexus a Lexus? Attention to details and sweating the small stuff. You can buy a darn nice Toyota so at first glance you might not notice the differences. People like me get paid (well I don't really get paid for what I do) to notice the differences though.

At first you might not notice the increased quietness, the extra isolation from road noise. You probably won't notice the little touches here and there, the better quality upholstery, carpet, trim pieces, and even vinyl. And I think that's part of the idea, that you shouldn't notice you are being coddled, you should just sense it.

All of this is a long-winded way of saying that the RX 450h is deserving of being called a luxury SUV.

The RX 450h is a hybrid that doesn't scream hybrid. If you drive it like you drive any other vehicle you probably won't even notice the switch back and forth between electric drive and internal combustion engine (ICE). There is a little green 'eco' leaf icon that is illuminated when it is in EV mode, and you might notice the RX is a little quieter, but that's it. You will notice that you don't have to visit the gas station as often as the pure ICE version.

Motivation is by a 3.5-liter, V6 gas engine and two electric motors, one for the front wheels, and one for the rear wheels in the AWD model. The transmission is a CVT. Total power output is 308 horsepower, more than enough to move the 4,740 pound RX to sixty miles per hour in 7.9 seconds according to Lexus. Towing is limited to 3,500 lbs.

Fuel economy is rated at 28-mpg on the highway, and 31-mpg around town. I didn't check the economy but I can say that in the week I had the RX 450h the fuel gauge didn't move. 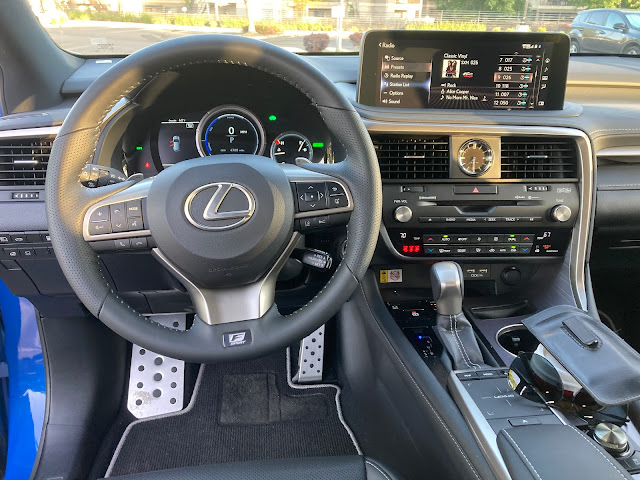 There is decent room for five inside and their luggage. 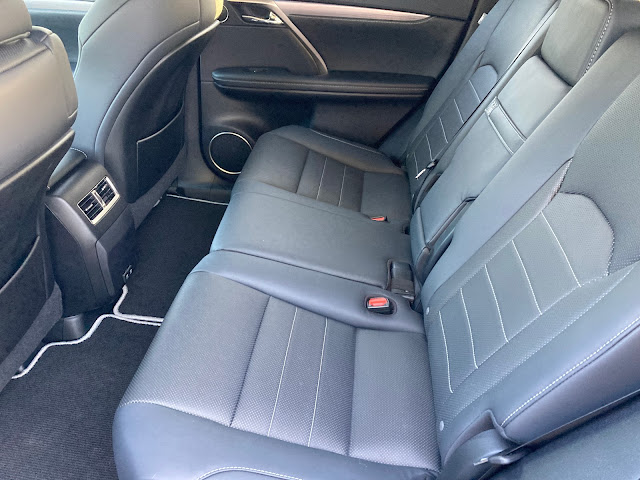 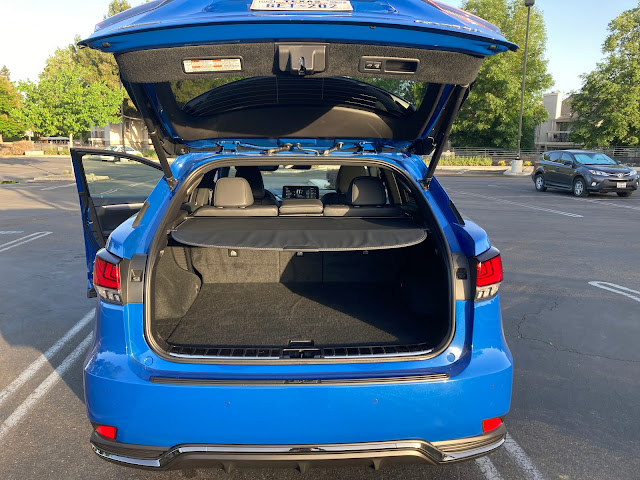 The 15 speaker, Mark Levinson sound system may seem like overkill but let me assure you it was fantastic. It is a pricey option ($3,365 for the Nav and sound system package) but if you enjoy music it is worth it. Rear seat passengers get their own door speakers. 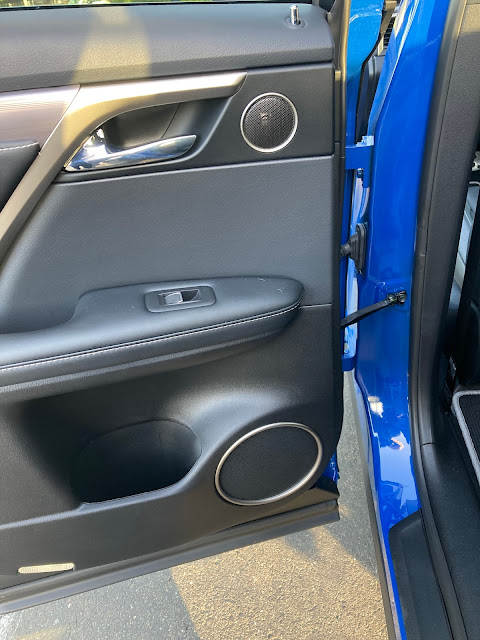 With just one exceptions I enjoyed my time in the RX 450h. It isn't an exciting ride but it is more than competent. Sometimes excitement is over-rated. Very little intruded into the cone of serenity of the cabin. Yet I didn't feel detached from the world outside. The ride was comfortable without being too cushy. There are a few potholes on my route to and from "my" coffee shop but nothing that upset the RX 450h or threatened to spill my latte.

The exception, the downside, was that darn touch pad Lexus thinks we all need in a vehicle. Seeing as I have so much trouble with these touch pads I just avoided it. A minor annoyance was the switches for the seat heaters/coolers; they were just hard to see.

I found the turn signal sound a tad annoying. It was too quiet and it reminded me of a Tick-Tock the Crocodile from Peter Pan.

There are literally dozens of choices if you are in the market for a SUV/Crossover. My preference is for something a little smaller than the RX (that would be either a UX or NX) but if this size - mid-size (192.5" long) - is right for you, and you want something nice, you should consider the RX 450h AWD F Sport. Pricing for the RX 450 F Sport AWD starts at $52,825. Add in $6,755 in options, and destination charges and taxes and you're over $65,000. For that you get a very nice ride that should last you a long time and have great resale. 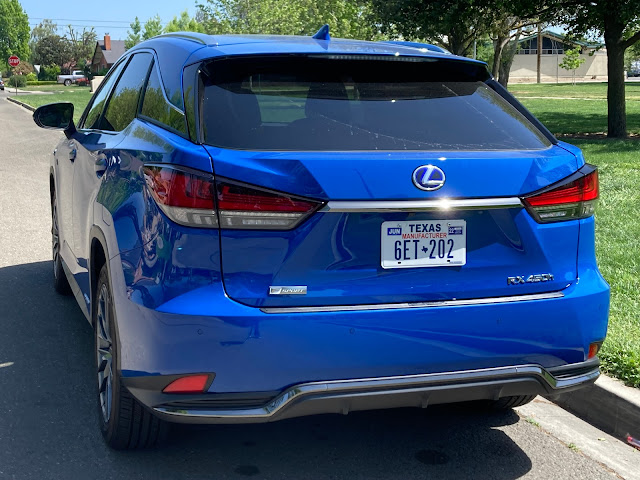