2022 Hyundai Santa Cruz - Is it the perfect pickup for suburbia? 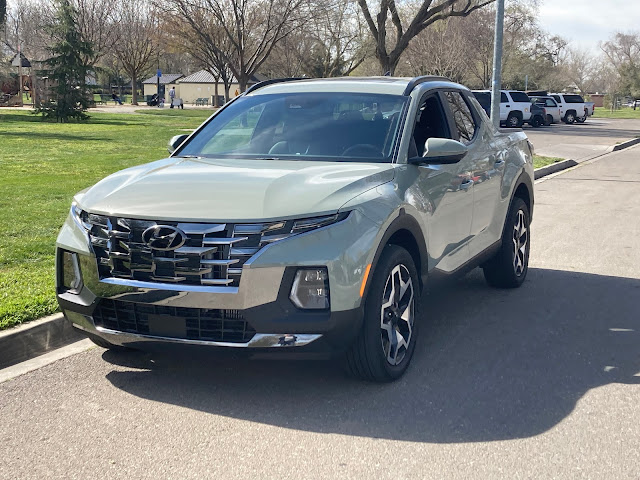 Two auto companies have decided there is a market for a smaller, car-like pickup truck. I got to drive the Hyundai version, the Santa Cruz, for a week and I liked it. If you know me you know I'm a Ranchero guy, and the Ranchero was a true car/truck mashup. So of course I was eager to check out the Santa Cruz.

I can't tell you which is better, Ford's Maverick or the Santa Cruz, because I've only driven the Santa Cruz. It would take a back-to-back comparison to really make a decision.

One criticism I've heard about both is that the bed length is too short to be a 'real' pickup truck. I think those that say this miss the point of the Santa Cruz. This is a pickup truck for someone who now and then needs something from the home center. 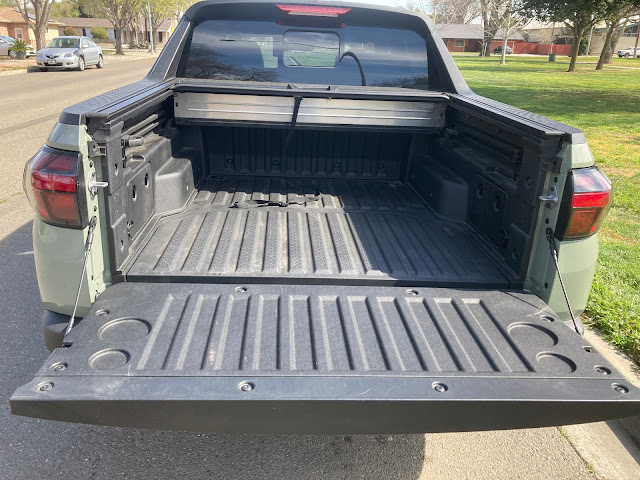 There is extra storage in the bed; two small covered cubby holes on either side, and a large area under the rear of the bed (it has a drain plug so you could fill it with ice to keep your soft drinks cold). With the tailgate up and locked this large storage area is inaccessible. 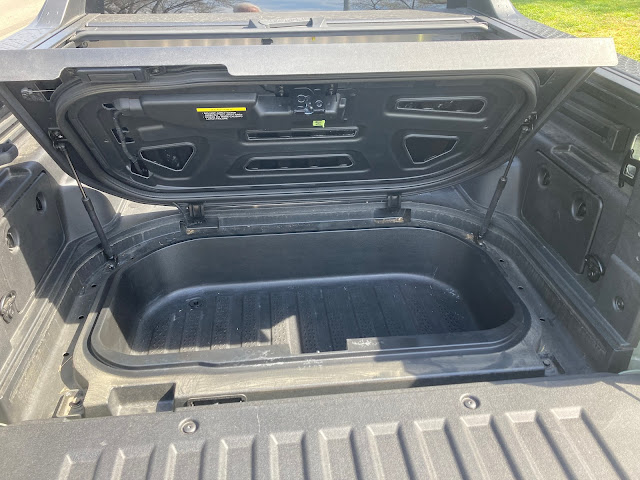 The bed has plenty of tie-downs including the adjustable side rail ones. Included with the SEL Premium and Limited models is an integrated tonneau cover. 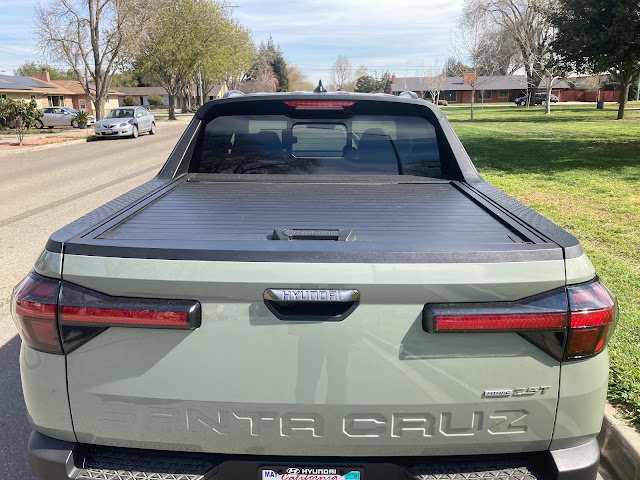 Fuel economy for the test Santa Cruz is rated at 19-mpg in the city and 27-mpg highway. As you can see I didn't meet the rated highway economy which came as a surprise. Normally with a Hyundai or Kia vehicle I can report better than the rating. 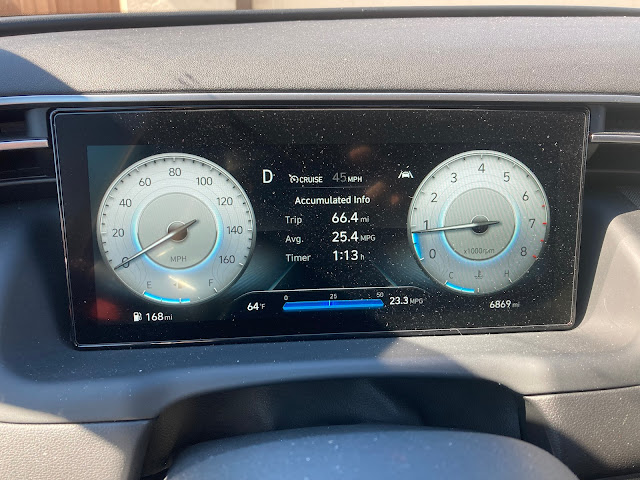 There is seating for five adults in the Santa Cruz. Hyundai says there's a tad over three feet of leg room in the back but with the driver's seat set for me (I'm just under 6') there was less. The seats, front and rear, were comfortable. 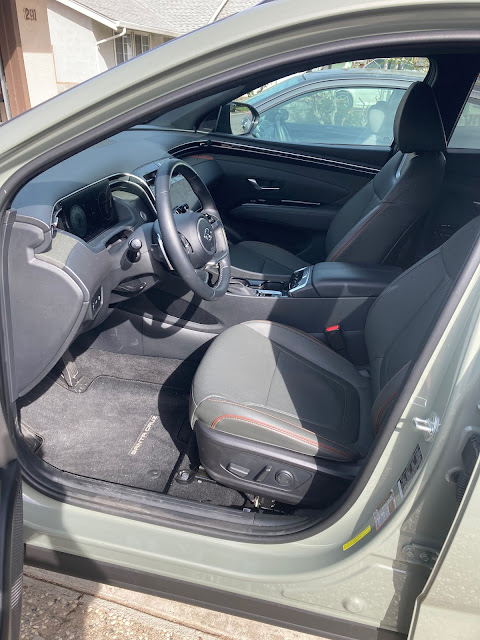 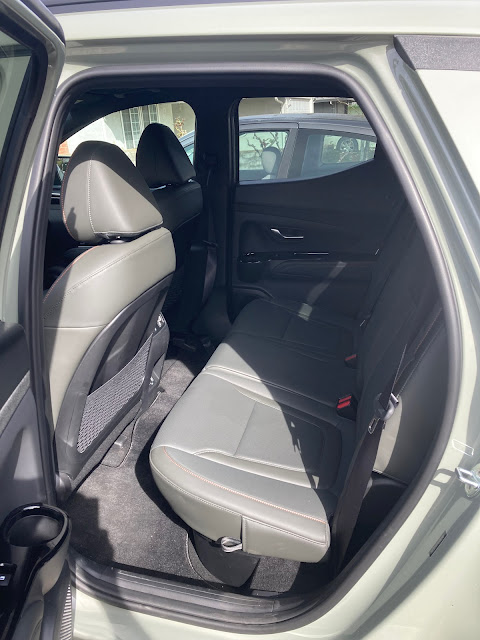 There is more storage inside hidden under the rear seat cushions.

The South Koreans must be listening to me. I am a big fan of the controls in their vehicles. Most of the controls are easy to find and use, a big plus. One feature that I especially like is where the tachometer or Speedometer is replaced with a video shot to either the left or right rear when you use the turn signal. I don't depend on the video view (always use your mirrors and do an over-the-shoulder check) but it is an added level of protection.

The Santa Cruz is no light weight; the test version weighed in at 4,123 lbs. Acceleration was still good, around 6 seconds from zero to 60 mph. Ride and handling was like a mid-size SUV which is to say pretty good.

Yes you can get a less powerful engine and just FWD, and normally I'd say forgo AWD but it is the only way to get the turbocharged engine. And there really isn't a fuel economy penalty. Price is the only reason to go without AWD and the powerful engine. A base Santa Cruz SE has FWD and a 191 h.p. and 181 lb-ft of torque 2.5-liter, 4-cylinder, and it is considerably less expensive ($12,530 less) than the Limited tested.

The Santa Cruz Limited is pricey but like an all-inclusive vacation package you'll be wanting for nothing. The only options on the Santa Cruz tested were the Sage Green Paint ($400) and carpeted floor mats ($195). So with a starting price of $39,870, adding in the options and freight and handling the total comes to $40,465.

Now back to the Santa Cruz versus Maverick debate. Based solely on specifications (because I'm not equipped to do a head-to-head comparison) I'd say it comes down to personal preferences. But I did like the Santa Cruz. And you can't beat Hyundai's warranty. 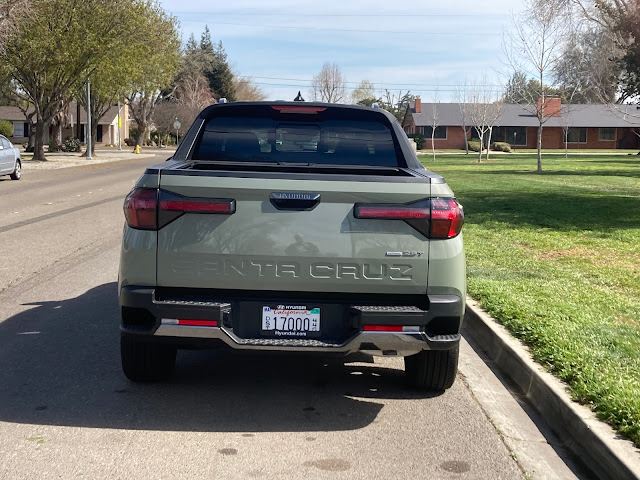