I'd kind of gotten over hybrid vehicles. It just seemed to me that there was little reason to be sort of electric and sort of internal combustion engine (ICE). Then I drove the Escape Titanium Plug-in Hybrid. It really did seem to be the best of both worlds. You can't argue with 51.7 mpg. 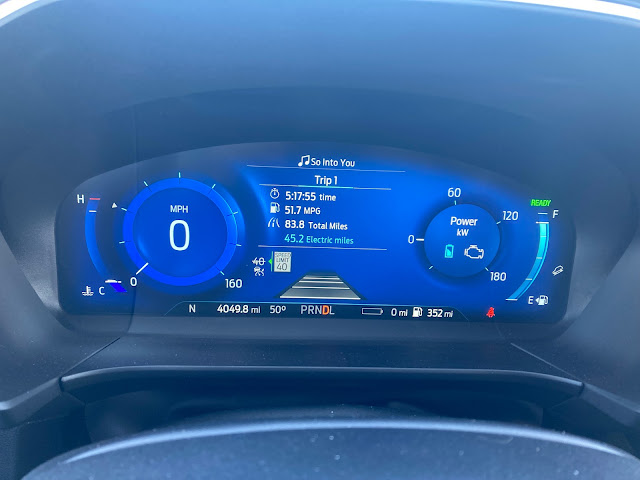 I never plugged in the Escape yet the battery power stayed well above half charge the whole week I had it. That is at least in part to regenerative braking - a little pop-up 'Brake Coach' in the instrument clustered told me my braking was returning between 90-100% energy through regenerative braking!

I had a hard time telling when the Escape switched from battery to ICE. In the past hybrids switched over to ICE at a fairly low speed (25-35 mph) I found that the Escape stayed in EV mode for almost all my around town driving. The changeover was almost imperceptible. There are settings for the EV operation but I just left it in Normal Operation mode. Too many options can be confusing. 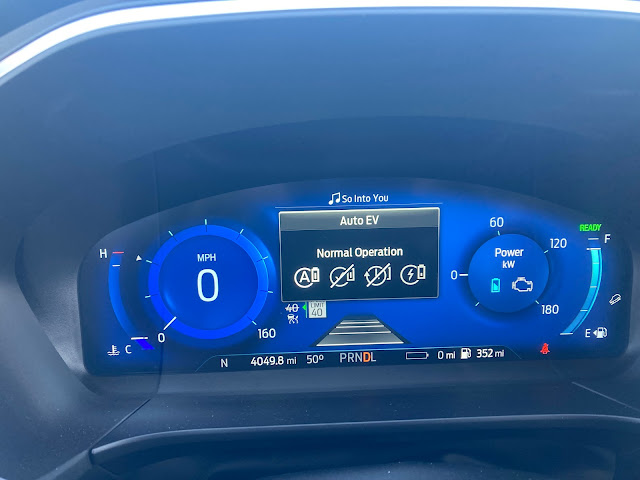 Enough of the controls for now. What powers the Escape PHEV? There is a 2.5-liter, 4-cylinder and an electric motor. Total power output is 221 hp for a 2022 model. Before you start gripping that that isn't enough trust me it is plenty for a non-performance vehicle that weighs 3,870 lbs. According to those that test such things the Escape PHVE will do 0-60 mph in 7.7 seconds, not blazingly fast but not slow either.

There is seating for five with 37.5 cu. ft. of cargo space behind the split back rear seat. As you can see there was plenty of room to bring home the groceries. 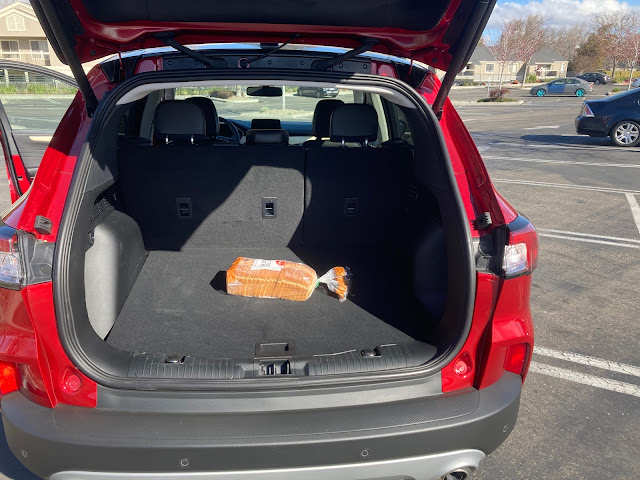 Ford does not list a towing capacity for the Escape PHEV. One thing I like about SUVs of this size is the ease of entry and exit. The test Escape being a Titanium model it was very nice, but not overly opulent. Neither I nor my wife was taken with the fake, blond wood trim. It just looked, well it looked fake. 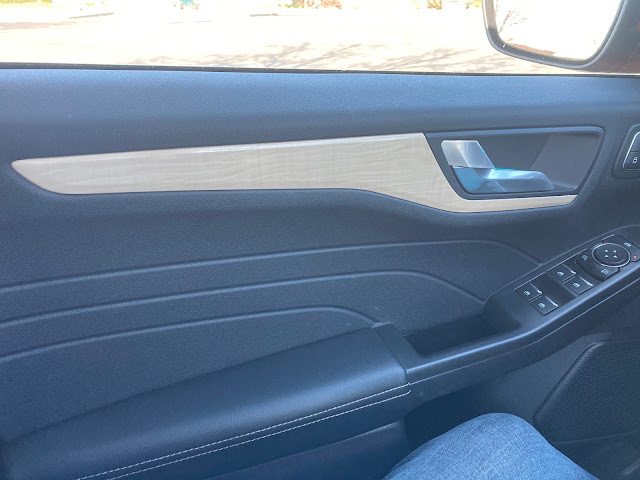 The rest of the interior looked and felt fine. The seats were comfy, and the seat heaters were toasty (yes even out here in Sunny California we need to warm our buns). 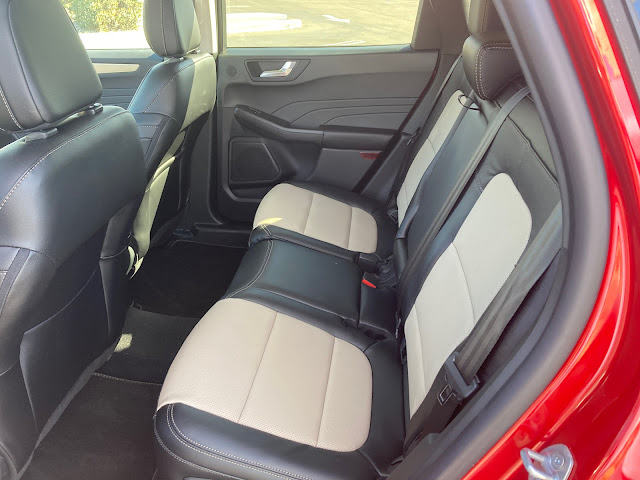 As with all the vehicles I test I try to turn on all the gizmos and gadgets just to see how they work. Like many vehicles the Escape has Intelligent Cruise Control. Some people love it and others don't. I like it; set your speed and the computer automatically slows or accelerates depending on what is in front of you. The Escape has a feature I'd not encountered before; Speed Sign Recognition. What it means is the cruise knows what the speed limit and adjusts the vehicle's speed to the limit (you can set a plus or minus tolerance). Wow, I was not expecting that at all. I was on a road with a 45 mph limit that changed to 35 at one intersection. The Escape braked down to 35 mph and traffic zoomed around me. I won't try that again; thankfully you can turn off the Speed Sign Recognition function. 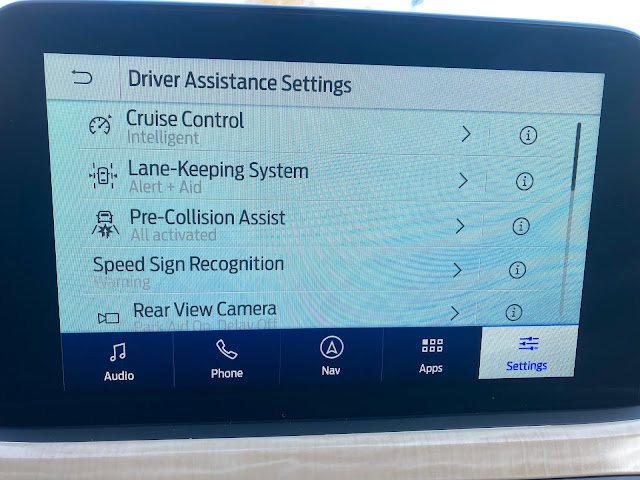 I liked the Escape Plug-in Hybrid Electric Vehicle. Were there any downsides? For me no but if you want or need AWD or towing capacity they are not available. All-Wheel-Drive and towing up to 3,500 lbs. are available on non-hybrid Escapes. The Titanium version is pricey - $39,185 base for a 2022 - but there are two less expensive plug-in hybrid Escapes (the SE @ $33,940, and the SEL @ $36,675).

The Escape Plug-in Hybrid Electric Vehicle bridges the gap between a hybrid and a pure EV. The future may be pure EV (we'll see) but for now, if you have range anxiety, a plug-in hybrid is a safe bet. 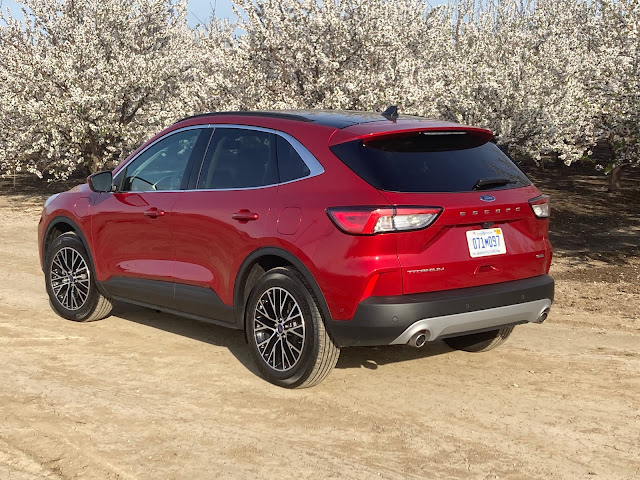 As many of you are aware there is a chip shortage that has drastically affected the production of new vehicles. Add in other supply delays and that means there is a shortage of 2022 vehicles. I suspect that many auto makers are not putting too many 2022s into their press fleet because it is much more important to fill as many customer orders as possible.